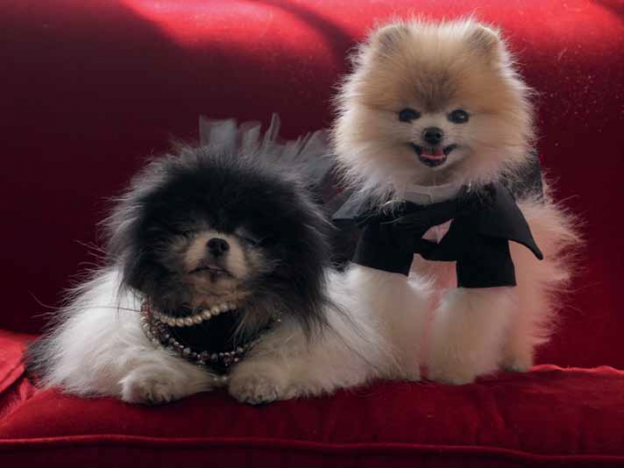 Getting his name up in lights is something Jack, a sweet Pomeranian owned by actress Shanna Olson, does best. Lauren McKellar speaks to Shanna about Jack’s blossoming career (and gets some tips on how your pooch can try to emulate his success!).

DOGSLife: How did Jack get started in the acting world?
Shanna Olson: Jack got his start in the acting world because I am an actress, and when I would hear about a role where they were looking for a dog, I would try to get him in for the audition. Also, sometimes he would appear on shows with me. One of his first TV appearances was with me, on a show called Groomer Has It, where I played a difficult client and wanted the groomers to give him a cut to look exactly like a show dog.

DL: Tell us some of his fabulous career highlights.
SO: Getting a role in Beverly Hills Christmas with Dean Cain is probably Jack’s biggest career highlight so far. This was his first big movie role. The movie is about a spoiled teenage girl who learns that true value in life does not come from material things, but in helping others. Jack (as Bunny) plays her very spoiled little dog.

One of Jack’s other highlights was being on ROVE LA with Rove McManus and showing off his doggie yoga skills and some of his costumes. Rove was really funny and really fun to work with!  Another highlight was a Nokia commercial we filmed together a couple years ago. It was a reality-based commercial where they filmed Jack and I throwing a Christmas party for some of his real-life animal friends, including a piano-playing pig!

DL: As an owner, what do you need to do to prepare Jack for a shoot?

SO: Before a shoot Jack gets a bath and a good groom. I like to do it myself rather than take him to the groomer. I also make sure he eats well, and I make sure I have lots of treats as well as his usual food on set with him. I try to keep him as stress-free and relaxed as possible, but he gets very excited when he knows I’m starting to pack up some of his clothes and costumes. I usually bring his own wardrobe for jobs because he has more than 500 outfits as well as tons of accessories like various sunglasses, jewellery etc. In this movie he played a girl dog, so we used a lot of his sister Isabella’s clothes and accessories.

If you are on social media, Shanna and Jack love making friends from around the world.
Facebook: Jack.Pomeranian
Intstagram: @JackPomeranian
Instagram: @ShannaOlson
Twitter.com: @RealShannaOlson

For the full interview, purchase a copy of Dogs Life issue 137.