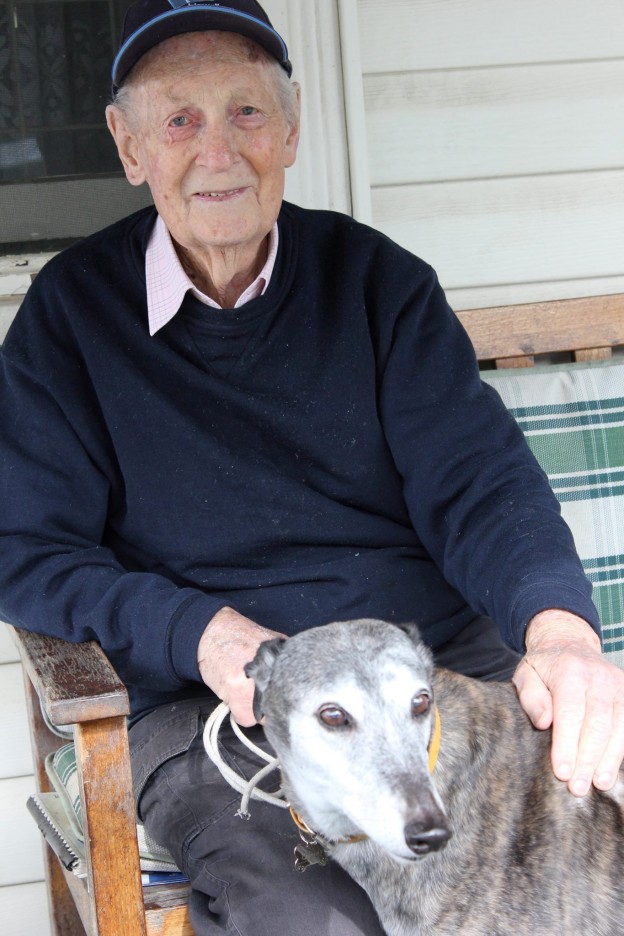 They may appear to be an unlikely pair — a Greyhound, the fastest breed of dog on earth, and a 91 year old — but these two make the perfect match, writes Kylie Baracz.

When concerned daughter Sue Ritchie contacted Greyhound Rescue to say that her 91-year-old father, Syd Twist, a Gladesville local, had lost his beloved dog and he now “had nothing to get out of bed for”, the organisation went on a search to find him the perfect partner.

As it so happened, Greyhound Rescue founders, Janet and Peter Flann, had a dog in mind — a 10-year-old senior dog called Cheeky — that was desperately searching for a home.

“Sue’s story that Syd had lost his dog and ‘didn’t have anything to get out of bed for in the morning’ almost brought tears to our eyes,” says Peter. “But the thought that we could help by letting him adopt an older Greyhound was a good feeling. Not many people want to adopt an older dog but this seemed to be a match made in heaven, so it was a win for Syd and a win for Cheeky.”

After a standard trial period, the organisation successfully completed Cheeky’s adoption with Syd.

“Cheeky was being fostered by Rita who knew her character and personality very well, so Rita was confident of a good match and so she and Cheeky visited Syd to see how they got along,” says Peter. “The rest is history, as they hit it off right from the start.”

“Syd is so happy and loves Cheeky to bits,” says Janet. “She has rejuvenated an already spritely Syd, giving him a new lease on life.”

Syd and Cheeky now spend their days happily sitting outside the front of their home in Gladesville, meeting all the local passers-by.

“Both ourselves and Rita have been back to visit Syd and Cheeky and the most important change is that Syd is happy again and has something ‘to get out of bed for’,” says Peter.

“His life has changed; he has a purpose and that is to look after Cheeky. Syd loves to sit outside the front of his house and meet the people passing by, so he and Cheeky are well known in his street. Cheeky is also a great companion for Syd and is very happy with him in her life.”

It goes without saying that Syd is now a staunch advocate for Greyhounds as pets!

The Flanns are advocates of adopting older pets and say Greyhounds can play an important role in the lives of their senior owners.

“To see the bond between Cheeky and Syd speaks volumes for this much-maligned, misunderstood and gentle breed of dog,” says Janet.

While many people would not consider a Greyhound as a pet, Cheeky is an example of how this gentle breed can offer such love and companionship and make a difference to one man’s life.

“Greyhounds make great pets because they are gentle and affectionate. They don’t bark much, they don’t lose much fur, they don’t have that doggy smell and they don’t need much exercise,” says Peter.

“They are suitable for a variety of homes and can fit into a family situation with children or couples and because of their low maintenance, they are also ideal for retired people. With the right supervision, they can even live in units.”

Sadly, on many occasions, senior Greyhounds are overlooked for their younger counterparts.

“Older Greyhounds are overlooked frequently because people want a pet ‘for a long time’. However, Greyhounds have a life expectancy of 12 to 14 years, so even a seven or eight year old has a good portion of their life left. Plus, older Greyhounds often have qualities that younger ones don’t and they need homes and love just as much as their younger counterparts,” says Peter.

Cheeky and Syd’s story is one of true companionship, proving Greyhounds and seniors can lead rewarding, happy lives together.

Greyhound Rescue is a fully registered charity that relies solely on donations and fundraising to continue its work.

In 2014, Greyhound Rescue found homes for about 150 Greyhounds as people are realising more and more what great pets they make. But, as fast as they are homed, more come in from the racing industry and Peter and Janet usually have about 60 Greyhounds in their care at any one time, all looking for homes. A lot of them are also in kennels because the organisation doesn’t have enough foster carers.

If you would like to help by fostering, adopting or simply donating, visit the Greyhound Rescue website or search for “Greyhound Rescue” on Facebook. Donations of more than $2 are tax deductible.