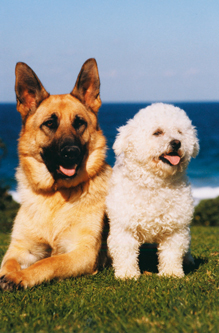 Indonesia is home to hundreds of stray dogs that are struggling to stay alive. David Verrall follows rescue groups on a relentless mission to end the suffering and the rescuing Bali street dogs.

Linda Buller, Aussie artist, doctor of traditional Chinese medicine and animal lover, makes her home in a valley at the back of Ubud, the fashionable retreat for westerners in Bali, Indonesia.

Stumbling down a dirt track to her house, the scent of frangipani wafting overhead, we are greeted by a pack of incessantly smiling, barking Bali dogs, a crossbreed of Asian Dingo, Kelpie and Blue Healer. A young brown Dobermann stands with his feet against the fence rail, his yellow eyes peering over the solid steel gate.

Hello love, greets Buller through the noise, as she opens the gate that screeches on its rusty hinges. Puppies and dogs swarm around our feet as we enter her small handmade studio house overhung with trees and huge stands of bamboo. A small river bubbles in the valley beneath us.

A black dog is leaping around us, barking. I am going to have to put her into the rehab, Buller says about the dancing black dog. She just stirs them all up. Shes totally out of control, but I love her. She was nearly dead when we picked her up, and now she is too healthy. The dog slips, galloping past us on the ceramic tiled floor.

Buller has her painting studio in Bali, and has opened the Bali Adoption Rehabilitation Centre, or B.A.R.C as it is now known, a centre that cares for street dogs found in Bali.

Ten years ago, I started picking up Bali street dogs, Bulla tells me. The first was a bitch, struggling to stay alive on the streets here. I called her Wang. I brought her here and gave her a chair and a pillow and a blanket. It made her smile. There were no vets or help and she was too depleted; she died three weeks later.

Hinduism regards dogs in Bali as an unfortunate reincarnation from their previous life, with little more respect than a tree or a rock. Their karma holds them totally responsible for their life. With a population of about one dog to five humans, they are only valued as food or something saleable.

Standing abruptly, Buller yells through the door at the barking dogs wanting to come inside with us. They understand her and quieten down. After that, I became obsessed, she continues. If I could stop the pain and suffering of these dogs in front of me, I would do it. All I needed was a car and a net, and for a long time I couldnt do anything. I used to bring the dogs here in a cage on the back of a small motorbike.

Spying the Dobermanns paws pressing against the front door, his yellow eyes still shining attentively through the gaps, Buller says, Wizz was nearly dead, too, when he came here. I was going nuts, with 12 to 15 dogs at one time, and by October 2006 I had set up the rehab. Now I only have six dogs here! Glancing at all the eager faces, she continues, These dogs eventually go to the refuge after a stay here. Except Wizz. I don’t encourage having European dogs here at all, but Wizz was very sick when we found him, so I keep him for security and mateship.

Wizz stares relentlessly at us through the door, waiting to be admitted.

If the locals do domesticate a dog, it is still the dogs responsibility to stay healthy and feed itself, despite providing security and entertainment for the family, Buller says. If the dog is sick in any way, it is abandoned on a street somewhere. The locals don’t see a dogs intelligence as worthy of any respect, unlike the European domestication of say, the wolf.

Did you bring a car? Buller interrupts. We have to go, as my workers are with the dogs we found yesterday. They have been waiting for us all morning. We load dried food, wire cutters and claw hammers, before setting off on the road up the mountain to Kintamani. As we climb the jungle road, we eventually stop alongside a pile of 50 wooden boxes holding live dogs.

We received a call yesterday from Serina, an English girl living in the area, telling us about this dog shipment. Normally they are very well hidden, but not these lucky dogs, Buller says.

A few forlorn, exhausted dogs strain out from some partially broken boxes, all stacked on top of each other.

We heard they were on their way to Java as live dog meat for crocodiles, or who knows, maybe restaurants selling RW [pronounced air way] for sate and soup, she says. Together, we had to wait overnight for permission from the police to free them. There is an ownership dispute, but the couriers didnt have the appropriate papers.

Dog meat is commonly eaten in Indonesia and the Bali dog becomes lucrative for thieves on the black market. A cultural anxiety between Java and Bali has become exaggerated with this increasingly frequent Bali dog theft to Java. The Balinese, of course, see it as another cultural disrespect and are becoming proud of their own dogs, more so now, she says, stumbling over the jungle floor towards the boxes, now silent with exhausted animals.

Buller sets about opening boxes and cutting the short chains holding the dogs fast from moving inside them. We start to liberate the dogs and local helpers notice some of the dogs belong to their friends in nearby villages. Some flee into the jungle – they will find their way home, I am assured. Other dogs stand stunned, looking blankly ahead. Most eat the food placed in the boxes by the helpers before their release.

Three riflemen arrive after hearing that there was some sport for them – word of mouth is quick here. Buller shirt fronts the men, who eventually leave, brandishing their rifles. It was a nerve-racking moment. One local helper takes a dog home for himself as a pet. With the dogs now released, we set off back to Bullers Bali Adoption Rehabilitation Centre.

As we drive, Buller becomes distressed. That’s how they see the dogs here, she says. At best, as sport to be played with, sometimes as bait to be hunted down by privately owned savage dogs for entertainment.

The car rattles over the poorly maintained road as Buller speaks emotionally.

The police officer that helped us with these dogs in the boxes fortunately likes dogs, and that was to our advantage, otherwise the police and officials in the community rarely care, she says.

Cool air rises around us as we cross shadowy river valleys beneath the jungles leafy branches. The Jakarta Post, the national newspaper, wrote tacitly the other day about how people are starting to care about local dogs, mostly as a result of our actions here in Ubud! Buller says, as we veer sharply off the windy road into the Rehab Centre. Otherwise, the only attention we get is from the ex-patriot community, who are familiar with the value dogs can bring into a humans life. The locals customarily don’t read those papers.

Squeals of delight come from the dogs inside the refuge as we arrive. Men are busy concrete rendering individual kennels, designed to isolate disease, while puppies stare delightfully up at us from their rooms, treading in their water bowls.

Buller gives a few assertive instructions to the men working there and warmly says to me, These young men working for the dogs are so egoless. Two young Balinese men are shepherding and isolating the dogs into various play areas in the yard. They are busy maintaining water access and giving individual attention to dogs recently vaccinated and injected for mange and other sicknesses. It is a crche for dogs, until they are healthy enough to be adopted out.

There is also another group called the Yudisteria Foundation, which has run a sterilisation and injection program here for seven years, Buller explains. Slowly, there are a group of Balinese who are discovering that they do love their islands dogs.

All I want for my rehabilitated street dogs is for them to be adopted out. I once had a mother dog with four puppies, in bad condition, and in two weeks they were healthy, Buller continues. This is my rags-to-riches story. Now all four puppies have been adopted out. Two went to England with Chris Bailey, a famous comedian, and now live in a mansion with trainers, a nurse and a vet. Their two siblings live in Canada, and their adopter has provided vaccines for the refuge. In seven short months, my refuge has become an international concern, and along with my painting success, we are creating awareness here, with the Balinese in the street learning to punish dog baiters and robbers.

There are no laws for the protection of dogs in Bali and their wellbeing is dependent on increased public awareness. Yesterday, local Balinese caught some dog baiters and beat them before giving them to the police, says Buller with delight. This sort of action was unheard of in the past, and the police hold the robbers, often finding them responsible for other offences to do with private property or motorcycle theft. The offenders are then repatriated to their homes again, even back to Java.

A small van arrives with three new cabinets purchased with enthusiastic donations to the refuge. The young Balinese men discuss the assembly instructions as we talk.

All I want is for visitors to Bali to come to my refuge and pat one of my dogs. I am encouraging local government to instigate animal-protection laws here, which are currently non-existent, Buller says. It has taken 20 years for this dream to become a reality. We have attracted vets from around the world to help here and are receiving some limited funding from a few enthusiastic supporters.

The refuge has become a health centre for dogs, and as we speak, an English woman arrives for her well-groomed pets acupuncture appointment. Buller excuses herself and treats the dog on a rickety table, as the new cabinets await construction.