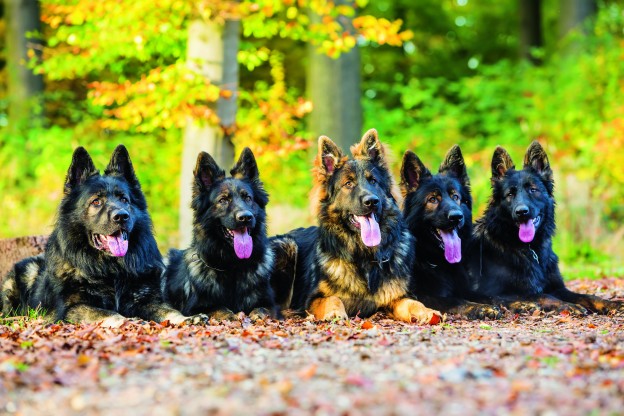 Kristie Bradfield looks back at the origin of pack theory and the role of the alpha dog.

There was a time in recent history when becoming the alpha in your own familial pack was what a lot of dog owners aspired to. There were television shows about it, websites and YouTube channels devoted to it, and genuine belief that our dogs looked at us as less-hairy canines. But there has been a shift in thought, as is so often the case.

Much has been said about pack theory. While it was and continues to be at the root of some forms of dominance training, there has been a severe backlash from trainers who don’t believe that pack theory has anything to do with our 21st-century domestic dogs. To understand why this backlash happened, we need to take a look at the past.

It’s difficult to pinpoint with certainty where pack theory originated from, but most experts make the link to research conducted by Swiss animal behaviourist Rudolph Schenkel. In the 1930s and 1940s, Schenkel studied wolves in captivity in order to better understand their social behaviour. In his studies, he defined how a pack is formed and the roles and responsibilities of the core members of that pack. He also made comparisons between wolves and domestic dogs, but these connections were just casual observations — nothing more than footnotes that showed interesting similarities between animals that shared a common ancestor.

Schenkel’s research, while interesting, was limited because he chose to study a small group of wolves that lived in captivity. Dr David Mech expanded on Schenkel’s work and in 1970, he published a book called The Wolf: The Ecology and Behaviour of an Endangered Species, which changed the way the world looked at wolves and, in turn, domestic dogs.

Mech was the first scientist to apply the terms alpha and beta to wolves within a pack, denoting their level of dominance. Each wolf pack had an alpha male and female along with subordinate wolves. If the alpha became ill, his spot in the hierarchy is challenged by the next wolf in line. The concept of the pack posited that given the opportunity, domestic dogs would live in a group where social hierarchy is clear.

When we apply this theory to domesticated dogs, however, humans become the alpha. When a dog misbehaves, he is challenging the human alpha; he is doing this in an attempt to dominate the alpha. In order to correct behavioural issues, the dog must become submissive, which involves the human physically dominating the dog. Dominance is at the core of pack theory: the struggle to get it and the struggle to keep it.

Pack theory has been widely used by behaviourists and trainers for decades. They have built a huge industry that instructs owners how to physically dominate their dogs in order to create a happy and harmonious home. One of the most controversial physical techniques used in dominance training is the alpha roll — this is performed by physically forcing a dog onto his back or side and pinning him in position. The reason for performing an alpha roll is to assert the trainer’s position as pack leader or alpha over a misbehaving dog. The alpha roll supposedly mimics a behaviour in the wild in which a higher-ranking wolf tackles a lower-ranking wolf and stands over the body as a form of dominance. While research now suggests that wolves in the wild don’t display this behaviour at all, it was a common technique used by owners of dogs with problem behaviour. But instead of fixing the initial problem behaviour, these techniques often made it worse.

The pack theory style of training, with its hands-on physical dominance, poses serious risks for both dogs and trainers. Recent research suggests that dogs will do anything they can to avoid conflict, so training techniques that involve confrontation and punishment will likely cause great fear, distress and, in some cases, aggression. Couple this with owners who are inexperienced or reckless and it is a recipe for disaster.

While it may be true that our domesticated dogs and wolves have a common ancestor, there are considerable behavioural differences between the two species. Domesticated dogs have been living side by side with humans for thousands of years and they have been studying us closely. They learn how to behave to get what they want by reading our body language. If a dog is showing aggression, it is less likely that it is trying to dominate you; instead, it’s likely expressing illness, anxiety or insecurity.

What we know now

In recent years, animal welfare groups such as the RSPCA and the Australian Veterinary Association have condemned the dominance-based alpha dog training approach, labelling it “drastically detrimental” and harmful to the human–dog bond. The dominance model poses serious welfare concerns for the dog as well as significant danger to the owner.

Interestingly, while pack theory researchers initially believed that aggression in wolves established a pecking order, it has now become clear that those studies were fundamentally flawed. There is even evidence to suggest that wolves in the wild don’t often show aggression within their family pack. If this is true, where does pack theory stand?

Time has given us the opportunity to refine our approach to understanding animal behaviour. While pack theory and dominance-based training were extremely popular (and still are, to a point), positive-reinforcement training utilising rewards such as food, toys or praise has been scientifically proven to be more effective in altering problem behaviour.

Talking about any kind of training method is divisive. All we can do as responsible pet owners is to listen to the science and adopt a training methodology that doesn’t put our dogs or ourselves in danger.

It’s been 47 years since Dr David Mech released his book about wolf packs in the wild that changed the way we view our relationship with our dogs. While dominance-based training methods have been largely debunked, it’s important to remember that every wrong step helps us to discover more things about our dogs. The more we learn, the better dog owners and advocates we become — and that is the most important thing of all.

DogsLife is a strong advocate of rewards-based training and does not believe in asserting dominance over any animal.