Lure coursing: the thrill of the chase 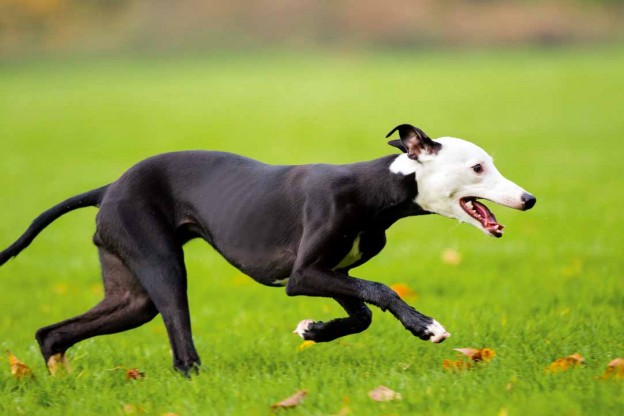 Lure coursing is one of the latest doggy sports to hit our shores, but is it the sport for your pooch? Katie Cincotta tells us more.

Some dogs would rather smell the daisies, while others just love to run.

It’s wired into their DNA to take off in the pursuit of prey. Anyone who has ever watched a dog fly off into the scrub after a rabbit will understand the thrill of the chase. Lure coursing is the hottest dog sport to tap into dogs’ natural instinct to chase prey, bringing together the dog’s ability to sprint and focus in an adrenalin-packed adventure.

Debra Huon, who heads Victoria’s Lure Coursing club, says the sport dates back to the 1800s, when it was popular with kings and landed gentry to race sighthounds for what they were bred to do.

Lure coursing is all about sight, not scent. Dogs just need to keep their eyes on the prize and hit their stride to catch that pesky little “plastic” rabbit shooting down the straight.

“These dogs are built for running, with fantastic speed and keen eyesight. They run with what we call a double suspension gallop (just like a cheetah runs) and some of them, such as the Saluki and Azawakh, can maintain high speed for two or so miles when giving chase,” Debra says.

Whippet breeder Krystal Lewis, who has more than six Whippets and a Rhodesian Ridgeback on her 40-acre farm in Cranbourne, Victoria, also says it’s thrilling to watch her dogs on the run in this increasingly popular sport.

Historically, it’s been the sighthounds such as the Whippets, Salukis and Ridgebacks who have excelled at lure coursing, ever since the ‘70s when Californian Lyle Gillette developed a mechanical system that replaced the hare or rabbit with a lure. In Australia, the fake “bunny” is usually a plastic bag tied to a nylon string that moves along a set of pulleys. “One of my Whippets goes absolutely berserk for it,” Krystal says. “When we first went along to check out the lure coursing, we didn’t train for it. I just took the dogs to see if they were interested. One of them looked at the plastic bag and then at me as if to say, ‘I’m not chasing a plastic bag; you’ve got to be kidding me.’ It really just depends on the dog.”

Debra says she once had a Saluki that was mad for the lure. “She once pulled the lead from my hand, giving me rope burn, jumped the barrier and joined in the chase with a Blue Cattle Dog.”

The Rhodesian Ridgeback Club of Victoria hosts lure coursing fun days once a month.“It’s a causal day and people just rock up and pay a few dollars to have fun,” Krystal says.

Krystal’s Whippet Ace has been clocked at 65kph on a lure course — an incredible speed for an animal that spends most of its day asleep. “They’re absolute couch potatoes; they sleep about 12 hours a day. But for that half an hour a day, they go crazy. Ace was one of the fastest that day so he’s at the top end of the scale.”

Other popular breeds that enjoy lure coursing include Staffies and German Shepherds, especially those that like to chase balls. The oddball of the mix is the Chinese Crested, who is also known to enjoy the thrill of the chase.

While the physical activity of lure racing is great for the dog’s fitness, it’s the brainpower required that also keeps them sharp. “They definitely have to focus. And they love to chase. So with lure coursing, they get to do what they love,” Krystal says.

Rules of the game

Competition lure racing isn’t run in a straight line; it includes curves and tunnels to simulate the experience of a dog chasing a rabbit in the wild.

In an Open stake, the dogs need to run “clean”, which means they can’t interfere with or chase another dog during the run. They need to remain focused on the lure.

When it comes to catching that “bunny”, it’s a short burst of performance that makes for incredible viewing from the sidelines.

“They get scored on how keen they are to chase and how fast they are,” Krystal explains.

Following the sport’s success in America and Europe for several decades, the Australian National Kennel Council (ANKC) approved lure coursing as a dog sport in Australia, effective from 1 January, 2015.

Krystal, who is the show secretary at the Group 4 Hound Club in Victoria, says they’re currently researching competition lure coursing events in the state, like those that have been run in Queensland, NSW and South Australia for many years.

She says the appeal of lure competitions is that the judging is based purely on the dog’s performance, not looks like the show dog arena and not the direction of a handler such as in obedience trials. “With showing or obedience, you are controlling what the dog is doing whereas with lure coursing, the dog is out there and it just does what it does. You just sit back and you watch, so there’s no bias.”

Dogs doing what they love without anyone telling them what to do? Don’t reckon any of them need to be convinced that that’s going to be a fun day out.