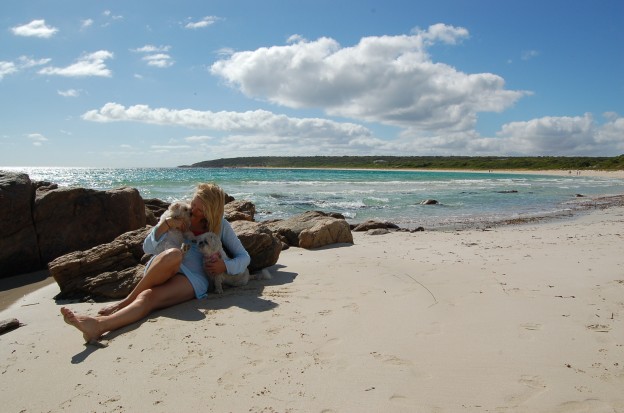 Katie Cincotta explores the divine and unbreakable bond between humans and dogs.

Ask anyone who shares their life with a dog to explain the intense connection they have to that animal and you get the familiar wide-eyed awe of a parent, a rush of superlatives, and an almost desperate need to capture the fierce, intangible love you feel for a child.

Dr Pauline Bennett, associate professor of psychology at La Trobe University, believes that almost maternal bond we have with our pet dogs has come about through evolution; that thousands of years ago humans began living with dogs as a way to better our chances of survival.

“Did we domesticate them or did they domesticate us? The theory is that we started living in more settled communities and the wolves just hung around, and those of us who liked them got to survive better. So, we’re actually hard-wired to like having animals around us.”

Together as a team, human and wolf (a species that would eventually evolve into 400 breeds of domestic dogs) could better hunt for food, protect each other, and offer companionship while braving the elements.

Dr Bennett says the unbreakable bond between humans and dogs set up both physical and emotional advantages for those engaged with man’s best friend.

“Those of us who lived with dogs were better able to survive and reproduce, because we were safer. When the animals were happy and calm everything was good with the world, but when they weren’t we knew there was danger.”

Writer Anna Krien, author of the provocative essay Us and Them: The Importance of Animals agrees the unique bond between dogs and humans is a “primal” exchange, one she was acutely aware of as a child.

“As a child, I found solace in animals … I also loved being with them because they were not human. Strangely, even then – especially then – as an eight-year-old I had moments when I felt less alone with animals than I did with humans.”

Krien tells Dogs Life magazine that she felt relief in being able to sit down with a dog, a cat or a rabbit and just “be”.

“By the time I was eight I was already self-conscious, aware of schoolyard politics, and as the youngest in my family I was constantly teased so I guess I always felt most comfortable with [animals]. I didn’t have my guard up, I was much more relaxed. It’s completely primal. It’s an exchange that doesn’t require words. Something about that is universal, and there’s real relief in knowing that feeling.”

In Krien’s research for her essay she discovered that canines exhibit the most social cognition of all the animal species on earth – they just “get” us.

“Even though chimpanzees are more us than anything, dogs are more able to read humans.”

She says you only have to look at the success of therapy dogs in hospitals to see the profound emotional connection we have with dogs.

“Animals are so special and so obviously lift depression, you just have to look at therapy dogs in hospital, they’re incredible.”

In my own experience as part of the Delta Society pet therapy program, I witnessed many miraculous moments between my Cavalier King Charles, Gidget, and the members of the high-care ward at Salford Park Nursing Home.

Every Tuesday we’d emerge with a sense of deep satisfaction that we had brightened their day, given them an escape from the drudgery, a friendly diversion from the loneliness – sometimes even leaving an impression so great it defied medical explanation.

On one occasion Gidget sat on a woman’s lap, who began stroking her and whispering in her ear, an excited chatter that was almost indecipherable, but so vivid it was as if she was reliving her youth. The nurses told me later that Mary had not spoken for more than two years.

But the most profound connection I ever saw was on a visit where Gidget sat underneath the bed of a woman in a coma, refusing to leave to visit the next person. I remember wondering why I had to tug at her leash to get her to move, as she was normally so content to keep doing the rounds of the ward, greeting each new person with a happy wave of her feathered tail.

In Jennifer Skiff’s book The Divinity of Dogs there are many more tales of a dog’s sixth sense and its ability to haul an owner out of depression, danger and desolation.

Scott Thornsley thought his life was over. He lost his job of 19 years. His wife had left him. He felt no one loved or wanted him. He decided to kill himself. At the very moment he chose to act on his decision, his Rottweiler Emma ran into the room, grabbed his hand ferociously, and pulled him to the front door.

Emma forced him to go walking in the snow, leading him around the neighbourhood for more than two hours to help clear his head of suicidal thoughts – an act which ultimately saved Scott’s life.

Skiff says every story that was chosen for The Divinity of Dogs demonstrated the unbreakable bond between man and his best friend.

“Some stories rocked me. Those were the stories where people described being at the depths of despair, about to give up on life, and what a dog did to keep them here.”

The former investigative correspondent for CNN who describes dogs as “healers, educators and protectors” says her own dogs gave her the inspiration to document the deep connection humans have with dogs.

“My dogs have been the reason I have woken up every single day of my life with a smile on my face. They have protected me from mean people and have given me insight into potential partners. They have been my children and my parents. They have loved me the most. I am among the ranks of millions of people who appreciate the souls of dogs and know they are a gift of pure love and an example of all that is good. More than anything, they have taught me how to be a better person. I’m not alone. The world is filled with people who have reached the same conclusion.”

Dr Bennett believes that despite humans being at the top of the food chain, dogs seemed to have out-evolved us in many ways, guiding us as role models for simplicity, conscious living and unconditional love.

“Dogs allow us to do fun things that make us happy, the sort of things that we don’t do in our grown-up world, just like we do with little kids.

“Dogs have out-evolved us in some ways. They do all the things we know are good for us: they are happy regardless, they live in the present; they show us that there is still goodness in the world – dogs are what we aspire to be.”