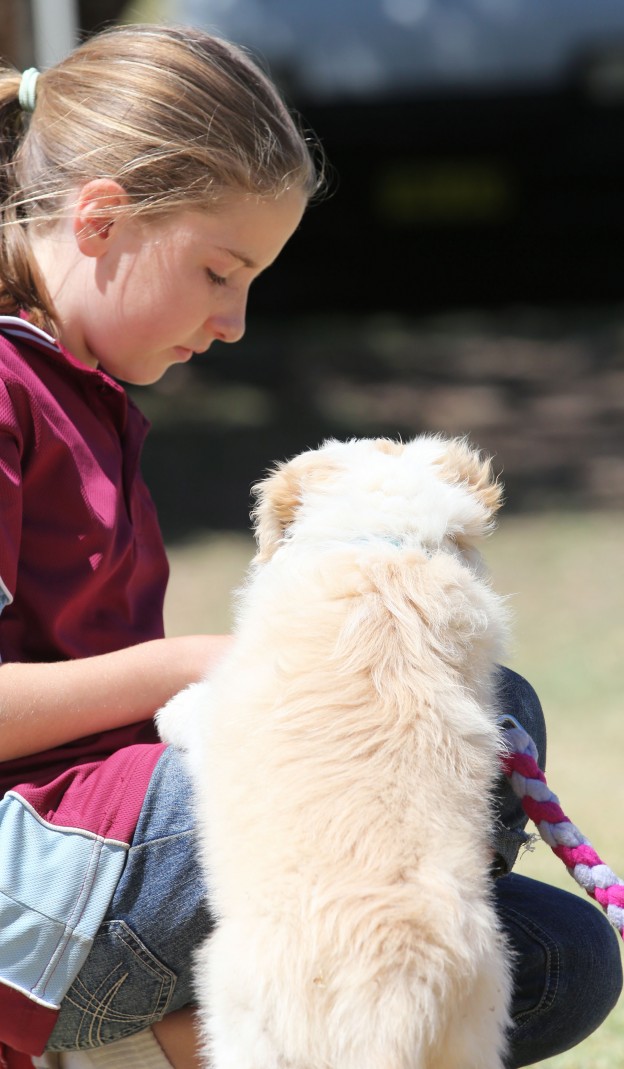 Dogs are playing an integral role in unlocking the wider world for children with Autism Spectrum Disorder, as Laura Greaves discovers.

We Australians like to think of ourselves as a sociable lot. We take pride in our spirit of “mateship”, in always taking the time to offer a kind word or a friendly “G’day”.

Imagine, then, what it must be like to feel unable to interact with your fellow Aussies; to be baffled by the prospect of having a casual chat. Imagine not knowing how to engage others in conversation, or how to respond when people speak to you. This is the reality for many people with Autism Spectrum Disorder (ASD).

For people with ASD, everyday scenarios that most of us take for granted – things like expressing feelings, social interactions and having empathy for others – are confusing and often frightening. Struggling with these situations can lead to frustration, anger and isolation.

Many sufferers also display repetitive or ritualistic behaviours that effectively shut out the “real world”.

“The main characteristics of ASD are dysfunction in terms of interpersonal or social relationships, and issues with communication, expression, impulse control and frustration,” says Dr Linda Marston from the Centre for Service and Therapy Dogs Australia (CSTDA).

“A lot of people with autism are, if not actively discriminated against, then certainly excluded, because people don’t know how to deal with these issues so they pretend they don’t notice or look the other way. For the person with autism, they might as well be invisible.”

But there is someone who will never judge an autistic person’s behaviour, and can also help to improve it: a dog.

Almost everyone is familiar with the concept of dogs helping people who can’t see, but dogs are increasingly also benefiting people with other physical and psychological conditions, including ASD.

CSTDA was founded by Yariv Ben Yosef, a certified dog trainer who spent more than 15 years developing and implementing assistance and therapy dog programs in his native Israel.

The organisation’s autism assistance dogs are trained to suit the specific needs of their young handlers. Each dog has basic training when matched with a child, and the child and his family are then involved in teaching and improving additional skills.

For a child who displays repetitive behaviours, for example, the dog can be trained to interrupt those actions.

“If I were to interrupt a person building a line of trains or a tower of bricks, I would probably get a very frustrated, possibly angry response. What we’ve found with the assistance dogs is that we can train them to knock down a tower of bricks and the child will respond with laughter,” says Dr Marston, who is a leading researcher of canine–human interaction.

“For some reason, people on the spectrum are much more tolerant of their behaviours being interrupted by a dog than a person. We’re not exactly sure why there’s this difference, but it’s there and we can use it.”

The dogs, whose breeds include Smooth Collie, Miniature Schnauzer and Labrador, also help to improve communication skills by being a subject of predictable conversation. “If you see a person on the street with a cute dog, you might go up and say, ‘What’s her name? What breed is she? How old is she?’” she says.

“There’s a lot of predictability and repetitive patterning in those conversations and that helps to reduce the anxiety around social contact, which can make it easier for people with autism.”

Research also shows that people who have pets are regarded as more friendly, more trustworthy and even more intelligent than those who don’t. “For someone who’s at a bit of a disadvantage, anything that can help them to be seen in a more positive light is going to help them be included on a social level,” she says.

“Because they feel less anxiety, they’re more open to trying new things. Part of the program is about challenging the young people involved to do more and be more independent.”

Unfortunately, problems with impulse control mean some children with ASD are a little too independent, often without regard for the consequences or their own safety. But CSTDA dogs can help here, too.

The dogs are trained to stop at the kerb, and will act as an “anchor” until the child gives the command to walk. They are also trained to recognise cars, and will not cross a road if traffic is present.

“Many children with ASD are ‘absconders’. There could be 13 locks on the front door, and they’ll be able to deal with them entirely soundlessly in order to get outside,” Dr Marston says. “Many parents of children who wander like that don’t get much sleep at night.”

Research suggests that the physical sensation of a dog asleep on the bed can reduce anxiety and promote sleep in children with ASD. One study found that an autistic child with a service dog has lower levels of the stress hormone cortisol upon waking than the same child without a dog.

“If a child does still manage to get out and run away, the dog is trained to track them, so parents have an extra safety net,” she explains. “One of the things we hear frequently is, ‘It’s the first time I’ve slept soundly since my child was born.’”

As well as training assistance dogs for individual children with ASD, CSTDA is also trialling a schools program for autistic students. It is currently running at Edspace, an independent school in Benalla, Victoria, where secondary-aged students have a range of medical and developmental conditions.

The program, which launched at the start of 2012, sees girls and boys – the majority of people with ASD are male – aged 15–18 spend one day a week interacting with and training CSTDA dogs under the supervision of professional trainer Brad Griggs.

Some of the students are working towards gaining government-accredited qualifications in working with animals, which may enable them to establish careers in related fields. “They may be able to earn an income as a dog walker or groomer, trainer’s assistant or even a trainer. Judging by what’s happening with this first group, that’s very feasible,” says Dr Marston.

Currently funded by a grant, Dr Marston says the CSTDA is hoping to secure ongoing government funding once the schools program is expanded and more data can be collected to support its efficacy.

She says the program appears to yield results faster than some conventional therapies, and Griggs can vouch for that. He was amazed to discover, after holding the students’ attention for an entire school day, that 20- to 30-minute periods of concentration are more usual.

“Of all the cool stuff I’ve done with dogs, working with these kids is probably the coolest. This program gives them something that engages them and encourages them to interact with adults and with each other,” says Griggs, who also takes his Belgian Malinois, Lexus, to schools. “These dogs give them the freedom to live their lives. I just find it remarkable.”

To find out more about autism service dogs and the CSTDA, visit www.dservicedogs.com. The organisation also trains assistance dogs for people with Alzheimer’s disease and “alert dogs” for people with chronic medical conditions like epilepsy and hypoglycaemia.