Why do dogs growl? 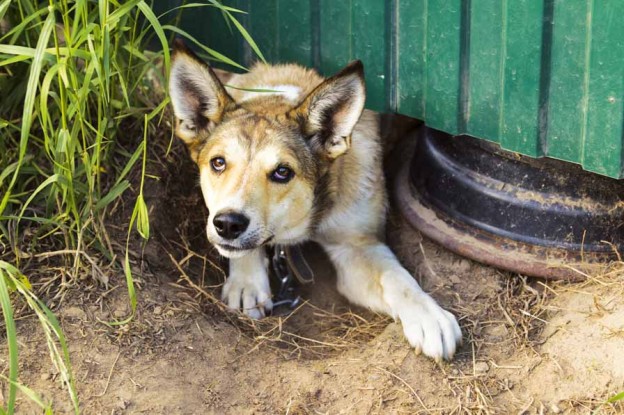 When a dog growls, this is bad, right? Katie Cincotta finds out why this common misconception isn’t necessarily true

You don’t have to be Dr Doolittle to know that when a dog growls, it’s time to listen.

Seasoned animal behaviourist Dr Joanne Righetti explains that growling is a canine vocalisation that communicates a dog’s intentions to another animal close by. “Generally, growling is present when the dog is either playful or feeling threatened.”

So, there’s one of the first myths busted. A growling dog isn’t always unhappy. Sometimes, they’re just trying to play.
Dr Jo says the key to knowing the difference is watching the pattern, as growls can often be part of a sequence of threatening or defensive behaviour. “At first, the dog’s body may stiffen and/or show signs of anxiety such as licking its lips or yawning.”

If the perceived threat continues, the dog may growl, which is a warning sign. “A growl warns that the animal has weapons (teeth) and prevents further escalation of aggression, which may leave the animal injured. Therefore, a growl is a good thing. It’s better than advanced aggression with the use of teeth.”

A dog will generally growl when a resource is threatened, including food, treats, space and toys. Dr Jo says a typical case might be when a person approaches a dog that wants to remain where he or she is, such as sitting pretty on the comfiest part of the sofa. It might be when he is happily chewing on a bone in the backyard and someone approaches — you, a stranger or another dog. Whoever it is, a growl indicates the dog wants to be left alone to enjoy a tasty snack.

The animal behaviourist says it’s important for owners not to regard growling as negative and to view it as a first-line response to a dog’s discomfort. “Dog owners are often shocked or scared to hear their dog growl. Instead they should be thankful that their dog is giving a warning, rather than simply attacking. This gives them (and their dog) a chance to remain safe and to work on the issue that is causing the dog to growl,” Dr Jo says.

If dogs could talk, the growl might translate to “back off”, “give me space” or “you’re making me nervous”, which are important communication cues to acknowledge. “I like owners to think of growling as a sign that they need to do something to make their dog feel more comfortable in a situation. It should never be met with punishment or the dog will skip growling and may progress to more advanced aggressive behaviours,” Dr Jo says.

When owners understand dog behaviour and body language, they can then prevent an uncomfortable situation from escalating. That might mean watching your children’s movements and interactions with the dog to see when the animal is feeling stressed, such as when a child gets very close to the dog’s face or is holding them in a way that is causing pain.

It could also mean changing your approach to the dog so that, for example, if she has stolen a dangerous cooked bone from the bin, to remove it, you offer a different food in exchange — something that won’t splinter and make the dog choke.

Dr Jo says some dogs will growl or bite if they are in pain. “Animals are experts at masking symptoms of pain and illness,” she says, which harks back to their time in the wild when alerting enemies or their compatriots to their illness would be to the dog’s disadvantage.

“Behavioural changes, such as lethargy, hiding in quiet spots, not eating, vomiting and so on, may be signs that your animal is unwell. Common ailments, such as hip dysplasia, may result in aggression from an otherwise placid canine companion,” Dr Jo explains.

Whining, whimpering, yelping, growling, snarling and even howling may definitely be an indication that your dog is suffering, especially if your normally docile dog suddenly starts to growl.

Dr Jo says small dogs often try to compensate for any perceived deficit in stature by growling at people or other dogs. Sometimes the behaviour can escalate to actual lunging or snapping at any dog or person viewed as a threat. This collection of behaviour is known as small dog syndrome.

Dr Jo says dogs of all sizes have the ability to guard property, resources and their owners. “All dogs can attempt to steal food or sneak on to the bed while their owners sleep. All dogs are capable of cuddles and playtime and can be trained to extraordinary levels with patience and committed owners.”

She says small dogs are renowned for behaviour such as growling or hiding because they are often more fearful than bigger dogs.

According to Dr Jo, one study showed that when listening to recordings of growls, large dogs reacted to the growls of smaller dogs, but smaller dogs were less likely to react to other dogs. The bark may indeed be worse than the bite. “More good news for owners of small dogs, if this means that their dogs are less likely to get involved in combat with other dogs,” Dr Jo says.

Where aggression is a likely response, it is often based on fear and a desensitisation program to the fear-provoking stimulus should be carried out. “For instance, if the dog growls at other dogs, they may need to be desensitised to other dogs. This is best done with professional help,” Dr Jo advises.

Listen up but don’t panic

If the growling is ongoing, the first step is a health check by your veterinarian who will identify, treat or rule out a medical reason for the behavior. “Growling becomes a problem if it’s persistent or escalates to snapping or biting,” Dr Kate explains.

But there’s no need to label your dog as nasty or aggressive, and it’s critical not to yell at her for communicating distress.

The science of growls

Researchers at the Eötvös Loránd University in Hungary are the first scientists in the world to study the growling sounds made by dogs, and they’ve made some absolutely fascinating discoveries.

We know that there are many types of dog growls and that they all mean something different. Sometimes a growl is a warning signal to back away; that the dog is guarding food or its territory. An excitable growl can mean a dog simply wants to play and sometimes a dog growls in response to a threat such as a stranger approaching.

According to associate professor Péter Pongrácz, who studies animal cognition and communication at the university’s ethology department, the research conducted analysed the differences between what those growls sound like.
With all dogs kept on leashes for safety, one experiment involved giving one dog a large meaty bone and then bringing another dog into the area, which triggered a “guard” growl from the dog with the bone — a growl that says “this bone is mine”.

The comparison of the growls from 20 dogs showed marked differences in the acoustics of each growl, including how
long they lasted and their pitch. Play growls were at least half as short and higher pitched than agonistic growls,
such as when food guarding, or warning growls for when approached by a threatening stranger.

In playing back the audio of the recorded growls through speakers, most dogs retreated from the bone when they heard the “fear guarding” growl of another dog — 11 of 12 dogs backed away within 15 seconds — proving that dogs definitely do listen and heed the warning growl of a dog protecting its own food.

When assessing how dog growls differ when a stranger approaches them, the scientists at Eötvös Loránd University found that dogs demonstrated a more highly aroused emotional state with male strangers, growling at a lower frequency and in shorter growls, than when a female stranger approached them. The researchers concluded that the higher experienced threat posed by men might provoke a more aggressive response from dogs, which we can detect in their voice signals.

Guys, take note. If you get close to a dog that doesn’t know you, if he gives you a low, short growl, you can safely translate that to mean, “I am not happy with you approaching me and you should scram, buster, before I take it to the next level.”