Training more than one dog 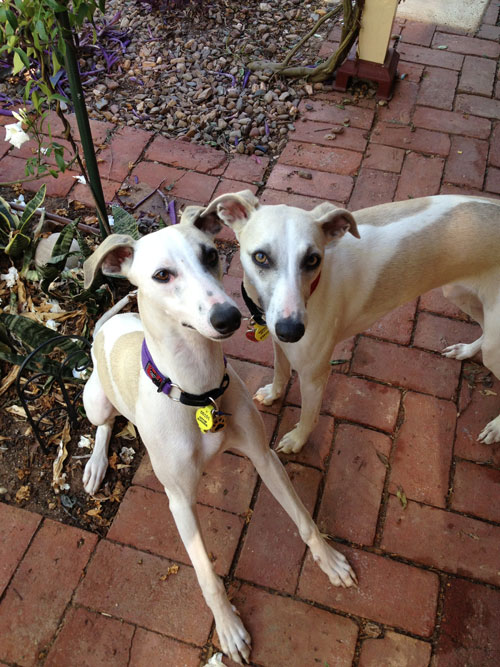 How can owners juggle training more than one dog? Kate Potter finds out.

Training one dog can sometimes be tricky, but when you add more dogs to the pack, the challenges seem to add multiply exponentially. While it may take a bit of extra time and effort at first, don’t give up. There are a number of techniques for training in multi-dog households that will help get you and your canine companions on track to training success.

Potentially the easiest way to get around the complications of training multiple dogs at the same time, and to make sure everyone gets the attention they deserve, is to have multiple trainers. A one-on-one setup makes it easier for each dog to focus on who they should be listening to and also means that appropriate rewards can be delivered promptly.

When Mark LeMessurier and Sharon Palm brought their second Whippet, Luca, into their home, they decided to train him separately from their first Whippet, Maxi.

“We’d seen a few dogs in class that lived together being trained together and they kept getting distracted by each other, so we wanted to avoid that,” LeMessurier says.

Bodil Schou-Hansen, from Adelaide Pet Dog Training, says “don’t forget that dogs are pretty smart. Once they focus on a particular handler they understand what’s relevant to them. That’s why, in group situations, the dog may briefly look over at someone else but then realise that it’s not necessarily linked to what they’re doing.”

If it’s not possible to have multiple trainers available at the same time to train dogs, Schou-Hansen suggests that you can still get positive outcomes working one dog at a time and by making training sessions frequent but short.

“It’s not prohibitive to train your dogs at home separately when one has something else to do outside while you work with the other inside, or vice versa, then swap them over.”

“Dogs tire out and lose concentration, just like people, so short sessions – even just three or four minutes – can be more successful and rewarding for both dogs and humans.”

Separating dogs for training sessions is also useful when one is at a different training level or when you’re introducing a new dog to the pack. Particularly for the addition of new dogs, training should be a positive experience for all pooches in the household and avoid building up frustration for any of the dogs involved.

Don’t forget to ensure that the dog who isn’t being trained is being given some sort of reward too. You don’t want him to feel excluded or like he’s being punished, so make sure he’s got something interesting to keep him occupied.

“Remove the other dog to something they enjoy that isn’t in close proximity, like exploring outside or chewing a bone or pig’s ear. It’s not time out, it’s learning that good things happen when the new dog gets trained,” Schou-Hansen says.

Palm says, “We got Luca about 12 months after we got Maxi and I don’t know how we would’ve gone having the two pups at the same time. Even now, if I get them both to sit, I’ll reward Maxi and Luca will be trying to grab everything.”

“Now I’ve learned from training them separately that I can say ‘go find’ and throw Maxi’s reward to one side, and while she’s involved in looking for her treat, I can distract Luca by giving him his. It’s been a huge help.”

Another technique is to build spontaneous training into your daily activities. By utilising brief moments of availability rather than trying to set aside blocks of time for training, you’re more likely to interact with your dogs regularly and deliver the message more often. For example, if you’re doing something in the kitchen and one of your dogs pays you a visit, go through a couple of quick commands with him. A minute here and there quickly adds up, can be easier to fit in to your day than long lessons and means you can deal with different dogs as opportunities arise.

Schou-Hansen also suggests making sure your dogs are well behaved individually, particularly when walking on a leash, before bringing them together. Just like training them separately, start with the basics as they learn to work with each other before launching into exciting trips out and about.

“Get the baby steps sorted before you bring in diversity and distraction. High-stimulus environments make it too hard for dogs to focus, so start small in calm places and build up as they improve.”