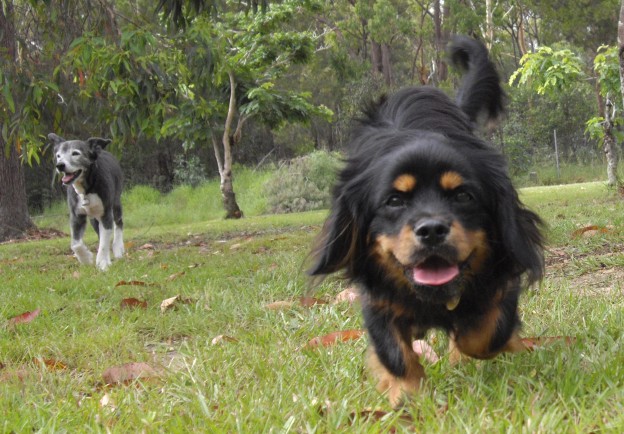 Vanessa and Darren Smith were going to put their King Charles Spaniel cross, Cooper, to sleep because of his bad temperament, when a last-minute recommendation to talk to dog trainer, Scott Donald, saved the day. Kate Potter discovers more about training a difficult dog

Cooper hadn’t always been a “bad” dog. Initially, the Smiths had brought Cooper into their family to provide company and support for their ageing dog, Jake. While it proved to be a great solution at the time, they failed to factor in to their planning what would happen to Cooper emotionally when Jake eventually passed away.

“Cooper’s life changed forever. He went from being a very happy, friendly, social little guy into deep grief. We let him get away with a lot of bad behaviour, which was really just a way of spoiling him,” says Smith.

Gradually, Cooper developed a lot of aggressive tendencies — first with other dogs and then with his family, eventually leading to him biting their young daughter.

“We tried a few trainers but everything was based on food rewards, which seemed to just escalate his behaviour. I felt like he had zero respect for us and we had no idea how to connect with him.”

All of the love and indulgence that the Smiths had given to Cooper had worked against them. He’d turned into a spoiled brat. His dominance and unruly behaviour finally reached a point where his owners couldn’t handle him.

The Smiths were distraught at the idea of losing their beloved pet but didn’t feel he could be trusted around children any more — theirs, or anyone else’s.

“As a last resort, I rang a trainer I’d used before,” Smith says. “She was going on holiday but gave me Scott Donald’s name as someone who could possibly help us.”

“From that moment on, our life with Cooper changed completely.”

Trainer to the rescue

Formerly a police dog trainer, Donald is a strong believer in building stronger relationships between dogs and their owners. His top training tip is not to base a relationship with a dog on food, and notes that, while there’s no harm in occasional treats, the best and strongest training methods are achieved using praise and developing mutual respect.

“I’m not saying you can’t use food, I’m saying that you can’t not use the physical stuff; the dog needs to be nurtured and touched,” says Donald.

Sometimes food-based training can be helpful, such as with puppies, as it helps to establish a trusting relationship. But once that initial bond of trust has been formed, Donald believes that relationships are made more meaningful by using positive, physical rewards and voice tones rather than snacks.

When Donald was working with Cooper, it was clear the little dog was craving direction.

“The more structure I put into the exercises we were doing, the better he’d respond; it was only days before we started some really advanced moves.”

Each success of Cooper’s was richly rewarded with positive tones and lots of scratches and pats. It seemed the more he got right, the more he wanted to do well.

While most dog owners have methods of praising their dog for doing the right thing, many are nervous about how to punish them for doing the wrong thing, as they associate punishment with smacking and other physical consequences.

Donald is quick to point out that it’s not what you do; it’s how you do it.

“You need to remember it’s OK to touch your dog. You can physically manoeuvre your dog to what you want him to do.”

Keeping your cool is the main challenge. If you get angry or frustrated, you’re more likely to show unnecessary aggression toward your pooch. You’re speaking a different language from the one he knows, so being patient is of utmost importance.

Donald says, “Take the dog somewhere you know he’s going to be a bit distracted or naughty and gently bring him into the position you want, such as sit or heel. If he gets out of position, put him back where you want him to be.”

“Don’t be afraid to use the word ‘no’,” says Donald. “Using ‘no’ as a command doesn’t mean pain, it just means ‘no, it’s not OK for you to do that’ and is good for getting your dog’s attention and letting him know he’s in trouble.”

Once your dog is paying attention to you, you can give a command for an appropriate behaviour, such as “sit”, and reward him positively for doing the right thing. Remember, dogs live in the moment and associate your tone and actions with the thing they are doing currently, not something they were doing moments ago.

Looking back, the Smiths can’t believe how simple the solution was.

“The funny thing is, back when we first had our old dog Jake, all of our training was through praise and love and physical rewards. Food never came into it.”

“Cooper is confident and proud now,” says Smith. “He doesn’t feel like he has to lash out at anyone to prove himself.”

“We now have a superbly behaved young man living in our home. I trust him with my daughter like never before — he’s become one of the most obedient dogs I’ve ever known!”

One Response to Training a difficult dog