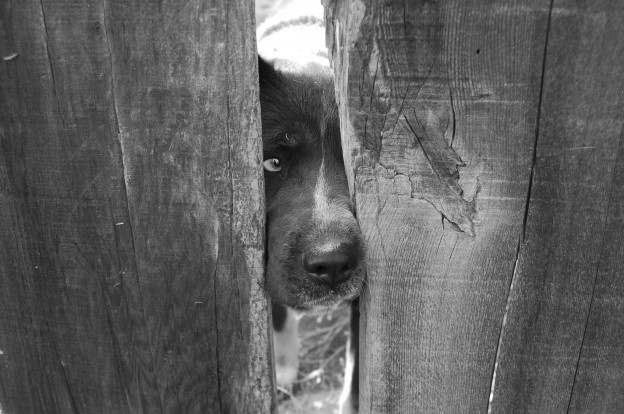 Dogs have fears just like humans but sometimes they can get out of hand. Kate Potter finds out why they get scared and how to reduce their panic.

Whether it is heights, spiders or things that go bump in the night, there are lots of common fears people face every day. When confronting something we find threatening — real or perceived — our minds and bodies automatically go into freeze-, flee- or fight-mode to deal with the situation. Dogs have exactly the same response to external stimuli.

Thousands of years ago, fear was an important and effective survival tool that allowed dogs to survive the dangers of living in the wild. Domestic dogs don’t need to rely on their primal instincts quite so much, so owners need to make sure that any fears are carefully managed to stop them developing into phobias and anxiety challenges.

A scared dog is often confused for an aggressive dog, so it’s important to be aware of your dog’s body language before you try to tackle a potential problem. Generally, a dog that is afraid of something will have his ears back, tail tucked under and his body lower than normal. His intense focus on the subject he’s scared of might mean the whites of his eye are showing and he’ll likely bark aggressively while moving away from the threat. Some dogs will show the sort of response you’d expect from a child, such as hiding, crying or shying away.

Alex Draper and Dave McKenna brought their Blue Heeler cross pup, Buddy, into their home as a second-time rescue. Buddy was a very fearful dog who would shake and cower away from people. “His first home was very abusive and although he was rescued from there, the new owner wasn’t able to care for him. When we offered to take him, he’d never been in a car and the only time he’d been outside was when he’d been taken from the first house to the second one,” Draper says.

Buddy’s bad experiences in the first few months of his life meant he had developed strong fears of cars, people — particularly men — being outside and being alone. Sam Lewis, from Sherlock Bones in Adelaide, says a fear of being left alone is one of the most common worries he deals with. “The main issues I come across are separation anxiety and fear of other dogs, strangers, vets and thunder or fireworks.”

How to ease the fear

How to address the dog’s issue depends on his age, genetics, environment and whether the dog’s problem is fear, anxiety or phobia. “If a dog has a fear of something, such as being attacked by other dogs, he’ll only react when in the vicinity of another dog,” says Lewis. “If it is anxiety related to a previous attack, he might become worried when returning to the scene and be constantly on lookout for potential attack, even if no other dogs are around. If it’s a phobia, he won’t be able to leave the house without a constant and extreme fear of being attacked while outside his safe zone.”

Buddy’s first few weeks in his new home were a challenging time. Draper says “both of us work but we couldn’t leave him alone – he’d tear up the house or yelp all day. When he was young and needed multiple meals, I’d have to drop home to feed him and check on him during the day but basically we had to teach him that it was OK to be alone.”

Because Buddy had never successfully spent time with other dogs, Draper and McKenna enlisted the help of a trainer to try and manage Buddy’s fears. “The trainer said that it wouldn’t be a good idea to go to puppy school with Buddy because he wasn’t a normal puppy. Any bully dogs there would overwhelm him and could make him worse, so we trained him at home instead,” Draper says.

While puppy school wasn’t appropriate for Buddy, it’s still important to let your pup spend time with other dogs. “For proper socialisation, avoid puppy schools where it’s a free-for-all and the dogs are allowed to jump all over each other,” says Lewis. “A small breed getting jumped on by a playful big breed can easily create fear problems, so look for a more structured environment. Take your dog out as much as possible to experience different environments, noises and sounds, placing him under very small amounts of stress that he can overcome and build confidence.”

Small steps have made big inroads to Buddy’s development. “We try to introduce him to other dogs slowly, as sometimes he can be territorial at first. We’ve found that by letting him take his time, he changes his attitude in a few minutes and is soon best friends with the other dog,” says Draper. “We’ve also noticed that having other dogs around him makes him more confident when meeting new people, which is something he’s normally pretty scared by. He seems to feed off the good attitudes of other dogs.”

Helping your dog to address his fears can be a contentious training issue and is hotly debated among dog behavioural specialists. According to Lewis, although there is no one clear method of dealing with dog fears, the most important cue you can take is from a dog’s body language. An experienced trainer or behaviour specialist will be able to help you understand what your dog is trying to tell you.

A popular theory is to avoid giving your dog pats and cuddles when he’s scared. “One thing we had to remember with Buddy is that dogs are dogs — you can’t deal with their problems like you do for people. Reassuring him with affection just makes him think it’s right,” says Draper. While Lewis agrees with the theory, he points out that it needs to be considered on a case-by-case basis as the main aim of addressing fears is to make dogs feel more confident.

“If a dog is scared of a wheelie bin, for example, shifting his focus onto you and giving him a pat while he’s near the bin can calm him down and lead him to think ‘OK, I was near the bin and nothing bad happened to me’, therefore increasing his confidence.” Toys or treats can also be used to shift your dog’s focus while he’s around a fearful stimulus. This distraction technique is known as counter-conditioning and is one of the more common ways of dealing with fears. The more motivated your dog is by toys or treats, the more successful it can be.

For extreme cases where food or toys are not enough, there are other options. “A professional trainer will use other techniques like flooding or habituation,” says Lewis. “However, all of these techniques should be used under the guidance of a professional because, if done incorrectly, they can make the problem worse.”

Even if you’ve had no issues with anxiety issues, dogs that have seemed fearless throughout their lives aren’t immune to getting scared. “Puppyhood, sickness and old age can all contribute to fears in dogs,” says Lewis. “Pups can go through ‘fear periods’ as they face new experiences and old dogs that lose their mobility, hearing or sight can become insecure and fearful. I’ve even seen dogs with simple ear infections or skin allergies react fearfully to a situation they’d normally be confident in.”

The important thing to remember with fearful dogs is that you may not be able to fix the problem and that constant management will be key to helping your dog live a more confident life. Be aware of what frightens him and try to control the situation and the level of exposure to the fear stimulus your dog receives. “The more times you can counter-condition and reassure your dog, the more confident they will become in unfamiliar situations. Remember, it just needs to be done carefully and slowly,” says Lewis.