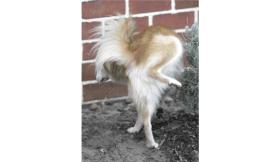 The title of this story may be a bit confusing or just plain interesting! While the correct terminology for a dog lifting its leg to wee is to cock (The Oxford Dictionary defines cock as to tilt something in a particular direction), some people prefer just to say lifting its leg.

Dogs Life asked veterinarian Dr Anabel Howe, from the North Randwick Veterinary Surgery in Randwick, NSW, why some dogs cock their legs and others don’t.
Lifting the leg is pretty much the technical term these days, says Howe. Lifting the leg is one of the sexually dimorphic behaviours of male, uncastrated dogs. Sexually dimorphic simply means the behaviour is being controlled by the sexual biology of the animals. In this case, its the hormone testosterone.

Howe told Dogs Life the main reason for this is so the dog can mark its territory and let other dogs know it is dominant in that particular area.
Lifting or cocking its leg enables the dog to mark its territory, usually on a vertical surface, against all other males in that territory, she says.
Dogs of all breeds, shapes and sizes will try to mark their territory when out for a walk. They do this by weeing on everything they can smell another dogs marking on. This can be a tree, pole, sign, fence you name it and they will wee on it!

Next time you are out walking your dog, take into account how many times it goes to the toilet. The majority of the time it is noticeable that nothing is really coming out they save some for reserve!
Howe explains that although this behaviour is usually unique to male dogs, there are the occasional exceptions. It is typically a behaviour of entire males, however, it has been observed in both castrated males and the occasional female dog, she says. It is a natural instinct controlled by hormones, which are produced by the body in high levels and also after sexual maturity.
The question has often been asked if a dog lifting its leg or squatting is a learned behaviour and if so, is it easy to change that behaviour. Lifting, cocking or squatting are all-natural instincts for dogs they don’t learn it, they just do it, and yes, it can be changed.

Dog behaviourists and trainers are commonly faced with owners who are sick of their pooch lifting and squatting on anything and everything they see. These days it is one of the most common issues raised by owners.

John Richardson, AKA The Dog Whisperer, is an accredited Behavioural Training Therapist from DogTech and explains that it is primarily male dogs that lift their legs to wee and that is mostly because of the male dogs anatomy.

Richardson explains that it all has to do with territory and deciding who is the largest dog in the neighbourhood, because every dog thinks it is.
However, by lifting its leg, the dog is able to mark its scent at the highest level possible to indicate to other neighbouring dogs that he is the large dog, says Richardson. By doing this they are saying to other dogs, Stay away from my territory and don’t mess with me! he explains. The more dominant or challenging the dog is, the higher he will try to mark and the more times, the better. He will be marking every tree, post, sign etc in sight!

While most male dogs lift their legs to wee, most female dogs will squat, but they are still marking their territory while doing so. It is nearly impossible for a female dog to lift their leg and mark the territory as high as males do, and that is the main reason why they simply squat.
Females will usually squat down to mark territorially and will then scratch the surface furiously to help spread their scent, Richardson says. However, some challenging females will at times also lift their leg in much the same way as the male dog, although not with the same effectiveness.

Some dog owners ask if it is all right to change the dogs behaviour and stop it from cocking its leg to wee. Richardson explains that this is acceptable and both you and your dog will benefit from this happening.

It has been my experience that if you continually allow your dog to lift its leg whenever it feels like it, the dog will become more and more challenging in its behaviour, says Richardson. The solution? Simple training. Training your dog to change its toileting behaviour can be simple and effective. The same methods used to train dogs at an early age or later can be used just as effectively to change their toileting ways.

If your dog continues to do this, growl at your dog saying, ah ah. This is a guttural sound that your dog hears as a growl and gently, but firmly, guide your dog away with the lead, says Richardson.
When you take your dog out for a walk, it will instinctively either lift its leg or squat to wee, he says. This will all depend on a few factors, such as the dogs age and temperament. It is normal for a young dog to keep squatting, sometimes even into late adolescence and occasionally into adulthood, depending on the individual dog. The breed and the size of the dog can also have a bearing on this behaviour, he adds.