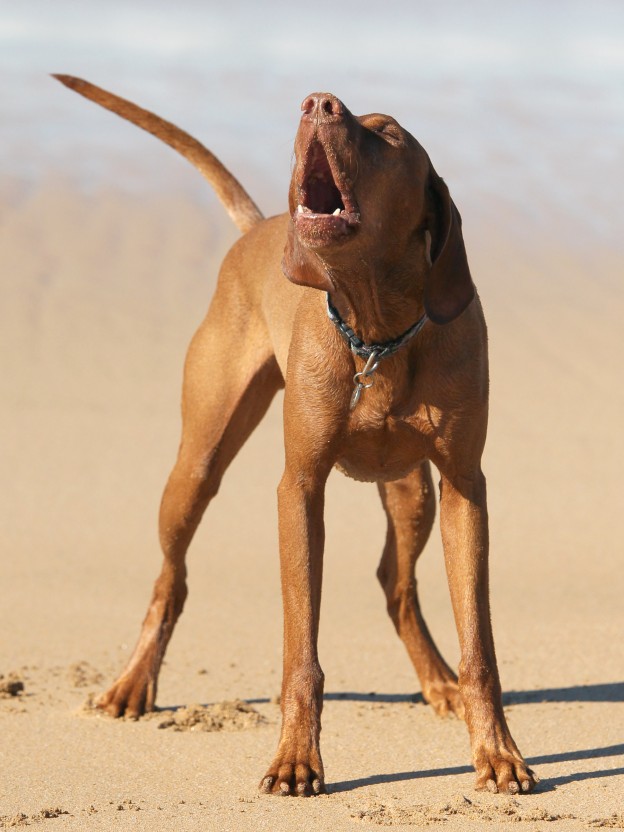 If you’ve ever observed your four-legged friends’ behaviour and thought “Huh?” you’re not alone. Danielle Chenery decodes some of  this dog behaviour.

Dogs can howl for a lot of reasons, but the most common are as a response to similar sounds such as alarms and sirens, to communicate with other dogs, or because of stress or loneliness, says animal behaviourist Kate Mornement.

“If it’s about getting your attention, don’t respond straight away or you’re rewarding the behaviour,” she says.

Dr Adele Cheing, a veterinarian at Victoria’s Animal Aid, says that if the howling is worse when the owner is not home, boredom or separation anxiety may be at play. “Ensuring your dog has enough stimulation with toys and other dogs, regular exercise and playtime can sometimes help with this issue,” she advises.

Canine behaviourist and professional dog trainer Brad Griggs agrees that it’s important not to reward the behaviour; even a negative response can be interpreted by the dog as sought-after attention. “You should first focus on appropriately rewarding your dog for being calm and quiet rather than reprimanding him for the howling itself,” Griggs says.

Female dogs “acting” pregnant when they aren’t is more common than you might think. “For the dog, the condition is very real,” says Griggs. “The exact underlying physiology of why this occurs is poorly understood, but is most likely related to the reproductive hormones involved in being on heat and being pregnant.”

A dog with a phantom pregnancy may be restless and start to “nest”, and can even look pregnant, with her belly and mammary glands swelling. The condition usually occurs two to three months after she has been on heat.

Desexing dogs before they go on heat will prevent the problem. “Treatment is often unnecessary as dogs only occasionally become unwell from this condition,” says Dr Cheing.

“Tail chasing is a behaviour that should never be encouraged in dogs, even though it may appear endearing at the time,” says Griggs. “CCD shows up more often in highly driven dogs such as certain terriers and some working breeds.”

CCD in dogs tends to have a close relationship with chasing (predation), movement and eating (ingestion) and involves repetitive behaviour, explains Griggs. Medication is frequently used to treat this condition.

It is quite common for dogs to hate men if they have had limited exposure to them.

“The puppy’s breeder may have been female, and men have deeper voices, look different, and are often larger. The lack of prior exposure means the dog fears the unknown,” says Mornement.

Desensitisation can help. “You need to change the negative association to a positive one by slowly introducing men, armed with high-value food rewards,” she says. “The dog can either take the reward from the man, or it may have to be thrown at a distance at first so the dog doesn’t have to get too close.”

Griggs says proper socialisation is key to avoiding phobias such as this. “The key to preventing this problem is a commitment to socialisation from the earliest age possible, with a focus on positive novel experiences that challenge the dog and result in the dog ‘having a win’,” he says. “Focus on ensuring the dog meets enough men of different ages, races, heights etc.”

Like children, dogs can turn into fussy eaters when overwhelmed with options. “Dogs in the wild do not have the luxury of being fussy eaters and they eat whatever they can find to sustain and provide them with the energy for living,” says Dr Cheing.

Solve this problem by setting firm boundaries around food and eating. Griggs says often dogs that are fussy eaters have food constantly left out for them, “or their ‘picky eating’ is reinforced by pandering to the dog’s refusal to eat its designated meal.”

“Leaving food out for the dog to pick at all day is a common mistake as the meal offered at the time will have less value,” he says. “Introducing a 20-minute slot for dogs to eat their meal in, and breaking the meal into a morning and night feeding regime are great ways to break this habit.”

Obsessive licking of the paws

This behaviour is usually related to anxiety. If your dog is licking to the point where the skin is raw or a bald spot appears, you should get it checked by a vet.

“The licking action performed releases feel-good hormones, which helps calm them and relieves some of the anxiety and stress,” Dr Cheing says.

She recommends distracting anxious dogs, or those with separation anxiety, by providing stimulating toys such as a food-filled Kong. “This way the dogs can still satisfy the lick need without causing any changes or smell to the skin,” she explains.

Sometimes constant licking can be the result of a skin irritation, and veterinary treatment is needed. Griggs says the obsessive component of paw licking is common in certain breeds of terrier, as well as Golden Retrievers.

This behaviour is often a result of boredom or territorial behaviour. “Dogs that run laps around the yard or persistently run up and down the fence-line often do this because of lack of stimulation and lack of exercise,” says Dr Cheing.

“This can typically be a problem in working dogs that are bred for a high-activity lifestyle where they need stamina and smarts. They thrive on high levels of exercise and being challenged.”

She recommends regular exercise with long walks and off-leash running if possible. “Providing toys and spending time training your dog can also help focus their attention and minimise the chance of this unwanted behaviour,” she adds.

They’re certainly not very tasty, so why do some dogs like to eat rocks? Mornement says this is often related to teething in puppies. With adult dogs, boredom is a likely culprit. “Or it could be due to an absence of thing to play with,” she says.

Interestingly, it does not mean your dog is lacking in nutrients. “Some studies have questioned the possibility of a nutritional deficiency causing them to chew and eat unusual materials. While this can be the case in other species, such as cows, there is no strong evidence at this stage to suggest this in dogs,” says Dr Cheing

Griggs says to make sure your dog has appropriate and engaging toys on offer. “Ingestion of non-food items is known as pica and this behaviour also falls under the banner of CCD,” he says.

In worst case scenarios, dogs who snap at non-existent flies may have a neurological disorder. This has been reported in King Charles Cavalier Spaniels, but this is not common in Australia, says Dr Cheing.

“Other breeds of dogs can exhibit this behaviour as a result of lack of stimulation. This can be a particular problem in working dogs that are used to chasing and herding,” she says. “Ways to help with this include regular exercise and training your dog to provide them with stimulation.”

According to Griggs, phantom fly-catching may not have anything to do with insects at all. “Eye problems and other medical conditions such as ear problems are often mistaken by worrisome owners as fly biting and, as with all the behavioural problems listed above, it is best practice to rule out simple answers like this before assuming the worst,” he says.