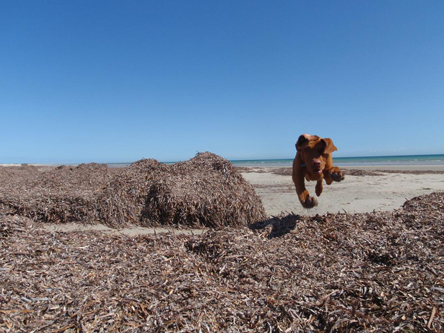 Who wouldn’t love to own a lush, green training field dotted with brightly colored agility equipment? For the majority of dog owners, this idyllic dream will always remain just that. The good news is that a great deal of agility training can be accomplished with minimal equipment.

Last issue, we looked at some foundation skills for agility that required no equipment at all. These included:

A reliable stay and release

A send ahead to a toy or food treat

Run by my side left and right

This issue we learn how to apply these skills over a single jump.

Dogs under 14 months of age should do very little jumping, as their growth plates are not yet closed leaving them susceptible to joint damage. This is particularly true for the larger, heavier breeds. The exercises below may still be practised, however, with bars placed on the ground or just a few centimetres above.

The principle of controlling your dog over and around the jumps will remain the same. Even for older dogs there is no need to quickly raise the height of your jump. Your dog needs to develop his jumping athleticism slowly, gaining in confidence at each step along the way.

For a healthy, adult dog of normal weight, start with the bar at approximately the height of your dogs elbow. As your dog grows in confidence you may raise the bar to a little over shoulder height which would be all that would be required even in competition.

In the early stages, it is not important to have a word to tell your dog to jump. Dogs pay most attention to the direction you are moving, the position of your body and only minimally, the obstacle name. Your setups and body movement should be enough to help your dog understand you would like him to jump the obstacle in his path.

Add your cue word only when your dog is regularly moving forward and over a jump with you. As there are more jumps than any other obstacles on an agility course, choose a word that you can say quickly and repeatedly without becoming breathless. Common cues for jumping are: jump, over or hup.

General obedience training encourages dogs to look directly at their owner. One of the skills your dog needs to learn in agility is not to look directly at you. The agility dog must focus on the obstacles ahead while at the same time using their excellent peripheral vision to remain attentive to you.

The target plate or toy we worked with last issue will help your dog to understand it is ok to look and move away from you. If your dog is performing the send ahead from last issue, adding a jump will be easy.

Place your target plate or toy about two meters past the jump and your dog two meters in front. Release your dog to the target as you say go. If you are using a toy as the target, you may want to follow and have a short game when he picks up the toy.

Come over the jump

Leave your dog in a sit stay about two meters in front of the jump. Move to a similar position on the far side of the jump.

Turn and call your dog to you reward in front position. Alternatively, face the direction you want the dog to travel, call him and as he comes to you reward by your side.

Running with your dog over the jump

Begin by placing your dog in a sit position in the centre of the jump while you take up a position parallel, but wide enough so that you are able to run straight ahead without running into the side of the jump. If you start near your dog, but then move wide to avoid the upright, your dog is likely to follow you around the jump rather than go directly over it.

Release your dog from the sit and move directly forward. If your dog has already succeeded in performing the first two exercises, he will most likely move forward and over the jump with little hesitation. Reward frequently and sincerely.

The post turn is the first and simplest turn over a jump. Sit your dog in front of the jump while you take up a position next to the upright facing the same way as your dog.

Release him and as he moves forward over the jump, turn away from your dog 180 degrees, catching him with your outside hand. Reward. You are now between your dog and the upright. Repeat several times starting with your dog both on your left and your right.

The pivot turn and the post turn are nearly identical from your dogs perspective except that now your dog will have to turn a little tighter and be rewarded from your inside hand.

Take up your position as before, but this time as you release your dog, turn toward him 180 degrees and reward from your inside hand. The dog should now be between you and the upright.

Last issue you learned how to perform a figure eight. Now, its time to incorporate a jump into the exercise. Stand in the centre of the jump with your dog by your side, about one metre from the jump. Send the dog over the jump with your right hand, followed by a post turn to the right.

As your dog completes the first circle, turn into your dog, rotate clockwise as you pick up your dog with your left hand, and drive him over the jump and around the second post. The first few times reward at this point.

When you are comfortable with this exercise, you may repeat it several times in succession as long as you and your dog don’t get too dizzy. As you and your dogs skills develop, you will be able to stay stiller and nearer the centre of the jump as you guide your dog over the bar and around the uprights in the familiar figure eight pattern.

BACK or turn away from you

Last issue you learned to spin your dog 180 degrees away from you with a back command. The turn can now be cued before or after a jump. Move with your dog close to and parallel to your jump. Cue back over and your dog should turn away from you and over the jump. Repeat in both directions.

Out is similar to the back command except that you and the dog will continue to move in the same direction it is simply a lateral move away from you. Again, move parallel to your jump and say out as you extend your arm out toward the jump.

Slowly increase the parallel distance from the jump before asking for out. This command will also be useful when you are faced with two obstacles side by side and you require the dog to take the one furthest from you.

The purpose of this exercise is simply to improve your dogs flexibility and strength, encouraging him to lift his rear legs cleanly over a jump. Place your dog in a sit on one side of the jump as close as possible to the bar. Straddle the bar so you have one leg either side of the bar.

Using a food lure or toy, encourage your dog to spring up and over the bar. Repeat several times in both directions, but don’t overdo it, as it is a very strenuous exercise. Again, start with low jumps and slowly over time build to full height

Basing these exercises on just one jump means that you can train important concepts in the privacy and convenience of your own backyard. When your dog understands the principles involved, you’ll be able to progress through classes and courses much more quickly. Even if you never plan to compete in agility, a little jump training can add fun and interest to the life of any dog.

A typical jump consists of two uprights that support a detachable cross bar. The bars may be made from wood or PVC piping and should be approximately 30 to 35mm diameter and about 1200mm in length.

The cross bar should be painted or taped to provide contrasting coloured sections, making it easier for the dog to see. It is vital also that the cross bar is easily dislodged if hit by a dog approaching the jump from either direction.

Angled screws or nails must not be used to support the bar as the dog could impale itself. The jump must not have any sharp edges to injure a dog. The jump used in photographs is made entirely from 32mm PVC pressure pipe, is very light yet stable and can be readily broken down for transport or storage.