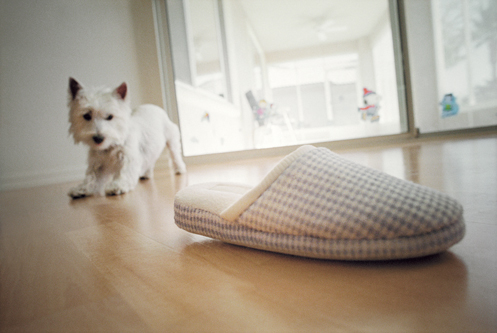 One of the reasons we are able to develop such close bonds with our dogs is because they have so many human qualities, but unfortunately this also means they are susceptible to ailments you may never have thought possible. Renata Gortan investigates canine compulsive disorder and learns how you and your pooch can get through it together.Obsessive-Compulsive Disorder (OCD) is a psychiatric, anxiety-related disorder in which sufferers experience unwelcome repetitive and distressing thoughts and doubts, and are driven to develop various compulsions that they believe will offset their obsessive feelings. This condition is also present in dogs and is known as Canine Compulsive Disorder. OCD in dogs is also associated with anxiety, and experts believe that stress plays a key role in the development of anxiety-related conditions. A dog suffering from OCD will display behaviour that is directed at either itself or an inanimate object; it is constant and repetitive, appears to have no obvious purpose and interferes with the animals normal functioning. Symptoms can include barking, digging, fly-chasing, tail-chasing, licking, running and pacing. OCD [behaviours] are often derived from otherwise normal behaviours like grooming, eating or walking, but are abnormal in that they are excessive in duration, frequency or intensity in the context in which they are performed, says Dr Kersti Seksel, registered veterinary specialist in animal behaviour.These behaviours are normal unless they are occurring repeatedly, so before diagnosing OCD, it is important to rule out any other possible causes via a comprehensive consultation with a veterinarian. Seksel, Dogs Lifes resident animal behaviourist, agrees that medical conditions, such as arthritis, fractures, any painful condition, neural entrapment, as well as dermatological conditions, have been implicated as possible underlying causes, so they need to be ruled out as possible differentials.

Just like certain breeds have a tendency towards stereotypical behaviours, there dogs more predisposed to suffering from OCD. In the case of spinning, for example, Seksel says twice as many males as females present with the problem. White, male Bull Terriers appear to spin more, German Shepherds tail-chase, Schnauzers check more, etc, but in all cases, it is probably more common in certain lines of dogs. However, these behaviours may appear in all breeds, she tells Dogs Life. So, we now know what OCD is, but how does it develop? In humans, OCD is an anxiety-related disorder, but in canines there are a few factors at play. Dogs Life resident veterinarian, Dr Michael Archinal, believes it is often caused by a neuro-chemical imbalance coupled with lack of appropriate training. Seksel elaborates: It probably has less to do with training per se – it is more to do with environmental factors that trigger the genetically predisposed animals to exhibit the behaviour. Positron Emission Tomography (PET) scans indicate biochemical and structural abnormalities in anxiety, panic and OCD. Anxiety, fears, phobias, stereotypes and OCD appear to be neuro-chemically related, but do not have the same underlying mechanism. Often, anxiety is thought to be the common factor underlying stereotypic behaviours, as well as OCD.Seksel says that, as with all behaviours, they are likely to be due to genetic predisposition and learning from previous experiences, as well as influenced by the current environment. In some cases, inadequate social interaction, environmental stimulation and opportunity for aerobic exercise have been implicated as factors, she adds.

Lessen the risk of developing OCD

It can be difficult to create and sustain a bond with your pooch while it is engaging in erratic behaviour, but there are steps you can take and factors you can control to lessen the risk of your dog developing OCD and ensuring he is happy, healthy and stress-free. Separation anxiety can cause your dog inordinate amounts of stress, but with the right training you can ease his alarm at your leaving the house. Ensuring he has adequate stimulation, enough room to move and leaving the radio on as background noise are just a few strategies you can use, but Seksel points out that most cases of separation anxiety are not solved without medication and behaviour modification. [For more information on separation anxiety, refer to Home Alone in issue #87 Dogs Life Jan/Feb 2008.]Inadequate social interaction with people can be easily remedied; all it requires is for you to spend more time with your pet. Certain breeds require more attention than others do, and if you don’t have the time to stretch your daily walk to two hours, an easy way to give your dog the social stimulus he craves is by letting him be near you as much as possible. with you and give him an affectionate pat now and then. Environmental stimulation is something you need to think about before you purchase a pup, Seksel points out. Consider the breeds needs, both physical and mental. Mental stimulation is just as important as physical exercise. A dog that has enough exercise will be happily exhausted and there will be less chance of him developing anxious habits, so whatever breed of dog it may be, make sure you get out and about. Even if you have a large enough backyard, it is important to give your dog a break from his familiar environment. The different surroundings with new sights and smells will provide him with much-needed mental stimulation, and as a bonus, you will also strengthen the bond between you and your dog.

If you have done all you can to remove any anxiety from your dogs environment and there is still no change, it is time to look at medical options. Seksel believes that to successfully manage OCD, a combination of medication – usually with selective serotonin re-uptake inhibitors – and a behaviour-modification program is essential.Archinal agrees and stresses the importance of undertaking behavioural therapy to complement the treatment, rather than relying on medication alone. You get four times better improvement if you combine behavioural therapy with medical therapy, Archinal tells Dogs Life. Therefore, we always insist that we institute a strong behavioural therapy and, after four weeks, if they have done the right thing, we will add medical therapy (after checking kidney and liver function via a blood test). But Seksel emphasises that, in severe cases, it is important to start the medication immediately.It is easier than you might think to instigate behavioural therapy at home. Firstly, be aware that you aren’t unintentionally rewarding the OCD behaviour by giving your dog extra attention when he is carrying out these behaviours. An important point to remember is dogs that engage in compulsive behaviours have an anxiety disorder, so it is imperative that you do not punish the dog for this behaviour either, as he has no control over it. Do you ignore his behaviour? Seksel believes in some cases ignoring is the best approach, but if you see that your dog is engaging in OCD behaviour, you could also try to interrupt it, grab his attention and get him involved in another activity to keep him distracted. It is best to visit an animal-behavioural specialist to find the best approach for your dog. You can try to reinforce another behaviour. For example, if your dog is constantly tail-chasing, give it a command to sit and roll over and reward him for any good behaviour. But Seksel says it is unlikely this will work. Dogs with OCD often cannot be distracted or taught other behaviours until the medication kicks in, she explains.This constant rewards system may teach him that he has a measure of control over his environment (feeling a lack of control may cause stress) and that tail-chasing doesn’t reward him with anything, but a sit and roll-over will result in a treat. At the end of the day, your dog is driven to these behaviours and can’t help performing them. This is not all about stress or anxiety it is something the dog cannot control in some cases, much like sneezing, Seksel says.If you are concerned about your dogs behaviour, please consult your veterinarian and/or animal behaviourist