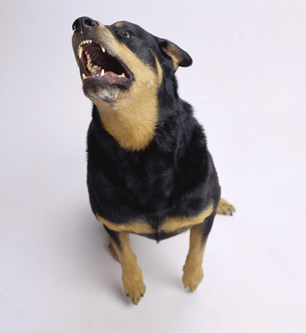 Sarahs Golden Retriever, Max, was terrified of storms. With his super-sensitive canine hearing, hed know long before the storm clouds rolled in that a storm was about to hit. Hed follow Sarah around, whimpering and howling.

Its not just storms that can get your dogs pulse racing out of control. Some dogs are terrified of young children. Others may be fearful when confronted with a lawnmower or a slippery floor.

According to Dr Jacqueline Perkins, pet psychiatrist from Good Dog Behaviour Clinic in Brisbane, there are varying degrees of fear, from mild anxiety to full-blown phobias.

One dog might show a gentle startle reflex, which is barely the blink of an eyelid. Another might have such a severe response they’ll harm themselves in an effort to get away, she said.

Adequate puppy socialisation is critical. Dogs, just like humans, can fear the unknown. To socialise your puppy, expose her to a variety of situations in a fun and non-threatening manner. Veterinarian and animal behaviourist Dr Debbie Calnon said to include things such as boisterous children, dogs, pushbikes, traffic lights and other pets. CDs are available that replicate the sounds of storms, fire engines, noisy children and other assorted noises that can evoke fear responses in dogs. It can be beneficial to play these for your puppy, she advised.

Dogs are individuals, just like people. Some have even, calm temperaments while others are nervous and anxious.

Common fear responses are panting, pacing, increased salivation, defecation or urination in the house, and clingy behaviour. Your dog may show certain body postures, flattening his ears against his head or tucking his tail between his legs, said Calnon. Other dogs tend to vocalise, emitting low growls or barking noisily. On the extreme end of the scale, dogs may break teeth and tear out toenails in frantic efforts to escape stimuli they are frightened of, she added.

Its hard to understand why your dog is distressed about something that seems harmless to you, but their fear is very real to them, emphasised Calnon. I have no doubt some dogs when faced with the object they fear think they are going to die. For some dogs, experiencing a storm can be like you sitting in the lounge room, knowing an axe murderer is about to break through the door!

What can you do to help your dog?

Your four-legged friends fears and phobias wont disappear by themselves. If left untreated, they may worsen over time, according to Calnon. A dog with a nervous disposition can start out being mildly fearful and with repeated exposure, develop an intense phobia, she said. It becomes a self-fulfilling prophecy for the dog. Even though nothing happened in the external environment of the dog (they werent hit by lightning, for instance), the dogs internal emotional state is one of distress. The dog suspects the storm will be a negative experience, and it is.

Dont punish your dog for being fearful or coerce her into confronting her fears, warned Calnon. Instead, help your dog to change her thinking. The key is to make potentially threatening situations fun, she said. Grab your dogs favourite toys and have a game during a storm or offer her favourite treats.

Its about trying to train the dog to feel differently about the feared event, so they anticipate something positive will happen, she said.

Avoidance is one strategy. But, unfortunately, you can’t always avoid the feared event. Create a comfortable environment for your pet during a storm or fireworks. Mask the stimuli by drawing the curtains, Perkins suggested.

Turn on the television or stereo loudly so there is continued noise between the fireworks display or storm.

Take precautions to keep your pet safe. Escape behaviour is a common response to fear. Shelters are filled with dogs which have escaped during storms or fireworks.

If your dog is a budding Houdini, check gates and fences to ensure there are no gaps or loose palings. Check that fly screens inside the house are secure. Look carefully inside your home environment for potential dangers, advised Perkins. Are there things the dog could hurt herself on if she becomes agitated?

A crate gives your dog the feeling of security a safe haven to escape to if he is feeling frightened, said Perkins. The crate should be just big enough for the dog to stand up and move around in. When preparing the crate, rub an old towel of your dogs or one of your own over the crate to eliminate the new smell. Place your dogs bedding inside, tie in some favourite toys and pop in tasty slow-release food, such as a Kong stuffed with treats.

Watch your own responses

Monitor your own responses when your dog is frightened. Some dog owners pat their dog on the head in a tense, agitated fashion, trying to reassure the dog. Your dog will pick up on your distress and mistakenly believe there really is something to be afraid of, said Calnon. Instead, try to remain calm and confident so your dog feels secure.

Ask your vet about dog appeasement pheromones. These plug-in devices emit a synthetic replica of the pheromone the mother dog produces when shes lactating. It can have a calming effect on your dog. If your dog is self harming or showing extreme responses to the object they fear, medication from your veterinarian can help.

The medication doesn’t stop them being phobic altogether, but it blunts their response, said Perkins.

Some phobias can be impossible to cure. One of Perkins patients was a two-year-old Border Collie, called Pepper. He had a severe phobia to a squeaky toy. The owner tried to rectify the problem by only feeding the dog when they were squeaking the toy. Unfortunately, all that did was teach the dog not to eat.

The dog developed a severe psychological response that was out of his control, explained Perkins. Faced with a dog that refused to eat, his owners consulted Perkins.

In the end, the fear was so ingrained that the only way it could be treated was to remove the squeaker from the toy and that became the dogs food bowl, she said.

One technique to help a dog that has developed a phobia is controlled desensitisation and counter conditioning. It requires your commitment and patience, but can go a long way to helping your troubled pet.

Calnon shares a method that may help desensitise a dog to a common fear of vacuum cleaners. The same technique can have good results for lawn mowers or any number of phobic triggers.

Desensitisation is a systematic exposure to the fear-inducing stimulus. You need two people for the exercise. The process needs to occur gradually and within your dogs comfort levels.

Turn the vacuum cleaner on low speed inside while the dog is outside with the other person.

Ask the other person to give the dog treats for as long as its turned on. (A useful tip: If your dog is hungry and normally likes the treats on offer, but refuses them, take a break and start again at a greater distance from the vacuum cleaner.)

Turn the vacuum cleaner off. DO NOT give the dog any treats or attention.

Turn the vacuum cleaner on and begin treats and attention again.

Over time the dog begins to associate the vacuum cleaner with receiving a treat.

Gradually move the dog closer and closer to the vacuum cleaner, offering treats only when its turned on.

Repeat this process until the dog is comfortable with the vacuum cleaner turned on, and in close proximity.

Common and (not so common) phobias