Coprophagia - Why Does Your Dog Eat Poo? 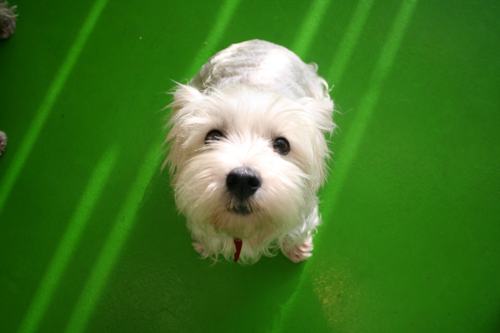 This article first appeared in the September/October 2007 issue of Dogs Life.

For some dogs, eating its own faeces is enjoyable, but for their owners, it can be disgusting and unacceptable, especially in public. Dogs Life editor Caroline Zambrano discovers that coprophagia may not be such a yucky situation after all.

Dogs Life resident veterinarian Dr Michael Archinal regularly consults with dog owners about their dogs eating faeces. After all, no dog-loving person wants to be greeted at the door with a foul-smelling kiss.

Archinal said that unless there is a medical reason causing the behaviour, eating faeces is normal, but there is potential for it to pose a problem. It all comes down to whether the faeces-eating dogs owner can stomach the episodes.

Archinals blind Golden Retriever, Heidi, eats everything, including the droppings of her furry housemate, Rosie. Archinal said Heidi has been doing this for a long time.

Its socially upsetting, but its not affecting her at all and she is healthy, he told Dogs Life. Its fine by me. I just make sure all my dogs are wormed regularly.

Coprophagia is a form of pica behaviour, which is the eating of non-food items, such as rocks, toilet paper and candy wrappers. Although swallowing non-food particles can be dangerous to the health of your dog, Archinal says eating faeces isnt except for certain parasites and gastric upsets.

However, he did point out the risk of unvaccinated dogs especially puppies contracting parasites like parvo through faeces. Parvo is a viral disease that attacks the lining of the digestive system and can lead to death.

Whether your dog eating faeces disturbs you or not, Archinal advised taking it to the vet for a check-up to look at possible medical conditions that could be causing the behaviour.

For instance, your dog may be suffering from Exocrine Pancreatic Insufficiency (EPI), a condition in which the pancreas stops producing and secreting enough digestive enzymes to digest food in the small intestine. It is a treatable disease, which shows symptoms of coprophagia, weight loss and diarrhoea. German Shepherds have a genetic disposition to EPI.

Another condition that may be hiding behind coprophagia is Inflammatory Bowel Disease (IBD), which is a debilitating chronic inflammatory disease anywhere in the gastrointestinal tract, which may result in death if not managed correctly.

Dogs that eat faeces may also be reacting to a medication, mainly steroid-types like cortisone, which can increase their appetite and make them eat anything.

Why do they do it?

There are number of theories to why dogs eat faeces, and every behaviourist or vet will have a different opinion. But one thing they can probably agree on is that there is usually more than one cause to coprophagia and therefore the treatment will be different for each dog.

We caught up with Dogs Life resident animal behaviourist Dr Kersti Seksel, who said dogs eat faeces for a lot of different reasons. Its perfectly normal behaviour. A lot of people are not even aware their dog is doing it, she said.

Many dogs eat their own poo, but also cat, horse and cow poo, she told Dogs Life. Its yummy for the dog. Cat poo is higher in fat.

Another theory is that it is a learned behaviour a dog observes other dogs engaging in coprophagia and mimics their activity, thus learning it from other dogs living in the house or nearby.

However, Seksel said taste plays a large role in dogs continuing to eat faeces. If they didnt like the taste, they wouldn’t be eating it in the first place.

Dogs may also eat faeces to seek attention from their owners. This is also learned behaviour, because when the dog engages in the act, the owner tends to reprimand the animal and, therefore, pay attention to it, reinforcing the act.

Seksel said this is not a common reason for coprophagia, especially in well-treated animals, as they are likely to get all the attention they need without having to draw negative attention to themselves.

There is also the maternal behaviour of bitches eating the afterbirth and licking the puppies bottoms to help them defecate, she pointed out, explaining that this could lead to coprophagia in the long-term.

Speaking of puppies, dogs can learn to eat faeces at a young age again, evidence of a learned behaviour. The owner may punish a puppy for defecating inside, and because they are punished, they eat their poo so its not around anymore. Its one theory, but its possible, Seksel said.

Another theory one that Seksel called far-fetched is allelomimetic behaviour. This is when a dog observes its owner picking up faeces and learns to do so itself. Dogs are good at learning from their owners and other dogs, but I doubt that would be a major reason, she said.

Feeding behaviour is another theory that some veterinarians and canine behaviourists have. Some experts believe dogs that are fed only once a day use coprophagia to supplement their diet. Archinal, himself an owner of a faeces-eating dog, agreed.

If you would prefer the faeces-eating habit to stop, Seksel suggested ways to help prevent the behaviour. But remember, because all dogs are different, and the reasons why dogs engage in coprophagia are generally unknown, there is no guarantee these ideas will work a combination of treatments may be the answer for your pooch.

Putting a muzzle on your dog is the most effective way, Seksel said. If your dog tolerates the muzzle and does not have it on for extended periods of time, this may be a practical solution.

Archinal said that adding a deterrent to the dogs food can also help. There is evidence that putting grapefruit juice in food will cause dogs not to eat that faeces. Some people use chilli, but be careful of causing gut upsets, he warned, advising owners to talk to their vet before adding any new supplements or foods to the diet.

Seksel said that ignoring the behaviour can help, especially when the activity first begins. But if it turns into an obsession driven by other causes, such as fear, it would require professional help.

For dogs that may learn to eat faeces from watching their owners pick it up in the backyard, try preventing them from watching you during the act.

Of course, regularly picking up faeces will also help, because there will be none to eat!

Keep your yard clean of faeces.

Do not react to your dog’s coprophagia in any way no yelling or correcting the behaviour. Simply ignore it.

Re-evaluate your dog’s environment. Ensure it is getting enough mental and physical stimulation through exercise, training, play, etc. Boredom and stress are definitely contributing factors in many cases of coprophagia.

Supplement your dogs diet with a food that, when metabolised, has a nasty taste, such as a tablespoon of grapefruit juice. Speak to your vet before adding any supplements to your dogs food to ensure you are not endangering its health.

In some dogs, especially long-term coprophagics, eliminating the behaviour can take longer and/or be more challenging. Each dog is different, so talk to your vet about methods that may be effective.

Researchers from the College of Veterinary Medicine at Washington State University in the United States conducted a study years ago on the owner documentation of coprophagy in dogs. The study has since been published in the Online Journal of Veterinary Research (7: 17-25, 2003).

The purpose of the study was to characterise coprophagic dogs by age, sex, breed, weight, diet, housing, social standing, habitualness and age of onset of coprophagy, and to determine owner perceptions of coprophagy and treatment effectiveness.

As the journal reports, researchers solicited and collected the data using Internet communication and web searches. Results showed dogs that engaged in allocoprophagy (when the animal eats faeces from other animals of its own species) had different access to faeces than other dogs and weighed less than dogs which did not engage in autocoprophagy (when the animal eats its own faeces).

For more details on the study and results, you can subscribe to the Online Journal of Veterinary Research by visiting www.cpb.uokhsc.edu/ojvr