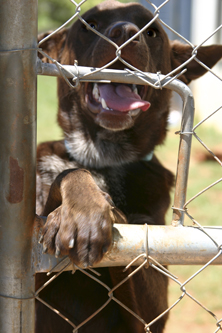 This article first appeared in the November/December 2007 issue of Dogs Life.

Dogs communicate primarily through body language. If there is a dispute of any kind, it is normal for them to display threatening body language to communicate to the other dog that it should move away or defer in some way.

This system is designed specifically to avoid physical confrontations that may result in injury. Such displays are part of normal canine communication and are used by most dogs on occasions throughout their lives.

Typical examples might be older dogs lifting a lip at a rough-playing youngster or bitches that vaguely snap at pestering male dogs. The question is, how do you judge whether your dog is just communicating in a justifiable canine way or developing a more serious aggression problem with intent to harm?

The first question many animal behaviorists may ask is, Has your dog ever caused injury to another animal? Although any display of aggression should be treated as a warning sign that your dog may not be comfortable in a particular situation and should be noted, the level of aggression has a big influence on how safe or otherwise it is to work with your dog.

Some dogs display aggression frequently but never cause injury, while others may seldom aggress but when they do, cause significant injuries. Surprisingly, perhaps the frequent aggressor with good bite inhibition has a much better prognosis. Snapping may be a social embarrassment, but the lack of actual injury means it is probably safe to work with this dog without putting others at risk.

If your dog has caused any injury necessitating medical treatment to another animal or shown any aggression towards people, it is not just communicating and should be seen by an animal behaviourist, who will design an individual treatment program.

Aggression is a complex problem and the causes are still poorly understood, however, some factors that may lead to your dog acting aggressively include:

Lack of early socialisation with other dogs, people or a variety of situations. One of the main reasons for puppy preschools is to teach dogs and owners the fundamentals of canine social etiquette and body language. Dogs who fail to learn these skills prior to 16 weeks of age may have problems socialising with other dogs for the rest of their lives.

Insufficient or inappropriate handling and training. It is worth noting, however, that some caring owners who try to do everything right land up with an aggressive dog, while those who seem to do everything wrong may still have a friendly, sociable dog. This may in part be due to genetic inclination.

Genetic inclination. Dogs are born with varying degrees of social inclination, particularly to animals outside their own pack. Individual biochemical make-up also makes some dogs more fearful and/or reactive to their environment than others. While one dog is more likely to respond to fear with passive defense reflexes, such as freeze or flight, others are genetically wired to react with more active defense reflexes, such as barking or lunging.

Fear the most common cause of aggression

Though not the only cause, the most common underlying factor in aggression cases is fear, with the main motivation being to chase away the scary object. For most dogs, nature provides two rewards for fearful aggression:

1.       The scary dog moves away. From your dog and/or from a resource the dog wishes to control, such as a toy, food or you.

2.       It makes the dog feel better. When a dog is stressed by the presence of another dog, a chemical bath of adrenaline and other neurotransmitters build in the brain. When the dog responds by acting aggressively, the chemicals are disseminated and the dog feels physiologically better.

Your dog learns that aggression is a strategy that works and makes him feel better. A little bit of punishment on your part, such as shouting no, is unlikely to be sufficient to counteract these two large rewards.

The more you are able to pinpoint and predict your dogs aggression problems, the more you will be able to manage, prevent and modify the behaviour. To do this, you will need to:

Dogs that are aggressive to everyone all the time are rare and do not tend to survive for long. Aggression is complex, partly because it is not usually a generalised trait, but is targeted at specific types of individuals or occurs only in specific contexts.

It is often difficult to accept that a dog which is so loving most of the time, can act aggressively to others in some circumstances. Examples include:

Dogs who fight with every strange dog they meet, but are great with people.

Dogs who fight only with a dog within the family.

Dogs who act aggressively towards people this may or may not be narrowed down to children, men or people in uniform.

Dogs who act aggressively to other animals, such as rabbits, possums etc. This behaviour may be triggered by fast movement, and small fluffy dogs seem to be at the greatest risk of triggering this prey drive instinct in a dog that may generally be good with other, larger dogs. This type of aggression can be difficult to treat, as it generally has a strong genetic component and is not really related physiologically to other forms of aggression.

On a lead or off?

On his own territory or off territory?

In the presence of a toy, food or particular person?

In response to movement, such as joggers or cars?

At a trigger distance of two metres or 100 metres?

What are the first signs that your dog may become reactive. Common ones include:

1.      Accept responsibility for your dogs safety and the safety of other dogs by being a real alpha or good leader. This has nothing to do with being physically dominant over your dog, but is about being the most successful member of the pack at providing food, shelter and safety. Most dogs act aggressively because it has proven to be a successful strategy for keeping other dogs away from them. Any displays of aggression should be treated as red flags that tell you your dog is not comfortable in a particular situation. Dont wait until your dog is so frustrated and uncomfortable that aggression becomes more severe. Quietly but immediately remove your dog from the confronting situation. If you take on this responsibility successfully, your dog will be more likely to defer to you and stop taking the matter into his own hands, as well as preventing a problem from developing. Trusting in you to provide a safe environment opens the door to re-education.

2.      Prevent rehearsal. Dogs get good at what they practise, so it is essential not to put your dog in a position where he feels the need to act aggressively. You can help prevent aggressive incidents by:

Keeping your dog under control at all times on a lead or light line.

Being aware and on the look-out for known targets and/or triggering contexts. Being able to predict aggressive behaviour gives you an advantage in averting or controlling undesired responses.

Reacting immediately to the earliest signs of aggression by calling your dog to you or turning quickly away. This is an essential part of re-training that requires good observational skills, concentration and timing.

Recognising your dogs critical distance or space requirement. Every dog has a distance where he does not react to another dog. Make certain your dog has enough space around him that he does not feel the need to flight or fight.