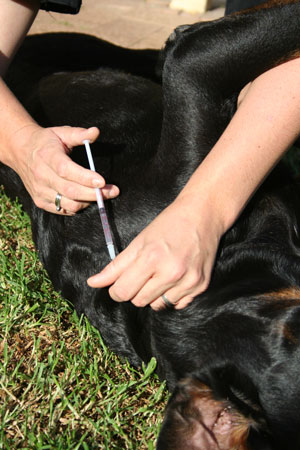 There’s so much to think about when you bring home a new puppy: buying bedding and toys, a collar and lead, signing up for Puppy School and choosing the right food. But perhaps the most important thing we can do for our furry new arrivals is have them vaccinated.

Dog owners generally understand that it’s important to vaccinate their dogs, but the specifics of the vaccination regime can be confusing. Why is it so important? Exactly which shots does your pooch need and when? Are vaccinations only necessary in puppyhood, or should they be repeated later in life? If so, how often?

“It’s important to vaccinate your dog to prevent him from contracting preventable and potentially deadly diseases. Without vaccination, his immune system is not primed when exposed to these viruses and bacteria,” says Sarah Reay, a veterinarian at Perth’s Bullsbrook & Midland Veterinary Hospitals.

“If the majority of dogs in our population were not vaccinated, disease would be rife.”

When should I vaccinate my dog?

Vaccination protocols can vary depending on the brand of vaccine your vet uses, which can make things a little confusing. But in general, puppies should have their first vaccination at six to eight weeks of age, a second shot at 12 weeks and a third at 16 weeks.

Some protocols may only be for two puppy vaccinations – the first at six to eight weeks and the second at 10–12 weeks.

As it’s not recommended that puppies be separated from their mothers before eight weeks of age, the breeder or shelter will often have taken care of the first vaccination. If so, ask for the vaccination record when collecting your pup.

Leptospirosis and Corona virus are a problem in some parts of Australia, so these can be added to the vaccine, making it a C7. Ask your veterinarian whether a C7 vaccine is appropriate for your dog.

Side effects of vaccinations are uncommon in puppies, though they may be a little lethargic for 24 hours after vaccination. Some puppies may get a small inflammatory lump at the vaccination site, which resolves after a week or two. Rarely, pups may experience fever and vomiting.

“Severe anaphylactic reactions are very rare. If a dog is sensitive to vaccinations, we can give them an antihistamine injection prior to their vaccination,” says Dr Reay. “If an animal is immunosuppressed, such as those on chemotherapy or those with autoimmune disease, this may mean they don’t respond to vaccination in a normal way. For this reason vets will only immunise healthy animals.”

A vaccine contains a killed or weakened part of a germ that is responsible for infection. When a dog receives a vaccine, the body reacts by making protective substances called antibodies.

Antibodies are the body’s defenders, because they help to kill off the germs that enter the body. In other words, vaccines expose dogs safely to germs – they can become protected from a disease but can’t actually develop the disease.

If dog owners follow their vet’s recommended vaccination regime, and if vaccines are stored and administered as directed, they should prevent most diseases. Canine Distempter, for example, has been virtually eradicated in Australia thanks to vaccination. Australia is also fortunate to be a Rabies-free country, so dogs don’t need to have the Rabies vaccine unless they’re moving to or visiting a country where Rabies is present.

However, there are no guarantees in life, and infection is still possible even with vaccination. “Kennel Cough is multifactorial – it can also be caused by other bacteria that we cannot vaccinate against – and dogs may still show mild clinical signs if exposed. Being a respiratory illness, it is very contagious, similar to our colds and flus,” Dr Reay explains.

“Parainfluenza is also similar to human influenza and there are different strains of differing virulence, while Bordetella is similar to Whooping Cough.”

The good news is that if vaccinated dogs are infected, their symptoms will usually be less severe than in an unvaccinated canine.

While not strictly a vaccine, there is now also an annual injection that can prevent Heartworm in dogs. Heartworm is a worm that lives in the blood vessels between the heart and lungs. Worms can grow up to 30cm long and can cause congestive heart failure. In its microscopic larval form, Heartworm is spread from dog to dog by mosquitoes.

Keeping up to date

Dogs can also contract vaccine-preventable diseases if their vaccinations aren’t kept up to date. After the puppy vaccination course, the first adult C5 booster should be given 12 months after the last puppy vaccination, followed by annual boosters for life.

If you think you’ll struggle to remember when your dog’s vaccinations are due each year, ask your vet to send you a reminder letter – most vets offer this service free of charge.

“No vaccination is a one-off. If a dog’s vaccinations are not kept up to date, their immune response will decrease over time, making that dog more vulnerable to infection when exposed,” says Dr Reay.

There is some debate in the veterinary community as to how frequently vaccinations should be updated. The current recommendation of the World Small Animal Veterinary Association (WSAVA) is for a C3 vaccination (Parvovirus, Hepatitis, and Distemper) to be given once every three years, although Dr Reay says “extensive studies involving thousands of dogs” have shown that immunity to these viral infections lasts longer than three years.

“The tri-annual regime is now widely used worldwide, based on scientific evidence and support of the WSAVA,” she says. “For respiratory infections such as Kennel Cough, boosters should be given every year, similar to our flu shots.”

Vaccine-preventable diseases are nasty and can be fatal. Would you really want your dog to suffer any of these symptoms?

Distemper: Fever, lethargy, anorexia, discharge from the eyes and nose, neurological signs such as weakness, wobbliness, muscle tremors, collapse, paralysis and seizures. Some dogs would show thickened foot pads, inflammation of the eyes and loss of enamel on the teeth.

In recent years, a growing number of dog owners have begun to explore alternative and natural treatment options for their pets. “Holistic veterinarians” – those who combine orthodox treatment with complementary therapies – are becoming more common as people seek a preventative as well as remedial approach to their dogs’ health.

But this has also led some owners to question the importance and efficacy of vaccinations, with some choosing not to vaccinate their dogs at all. Dr Reay says skipping vaccines can have disastrous consequences.

She says there is only one instance in which a vaccine may be safely skipped. “An alternative to annual vaccination is to test the level of immunity your dog has to Parvovirus and Hepatitis. This is known as titre testing,” she says. “If the response is strong then vaccination can be skipped.”

But ultimately, it’s better to be safe than sorry. “As a veterinarian with a scientific background, I’m very supportive of vaccinations and vaccinate all my animals,” says Dr Reay.