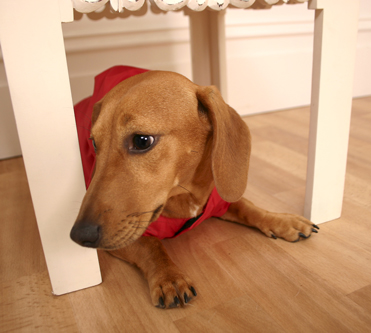 Hypothyroidism/thyroid disease in dogs is a common endocrine disease, but has become over-diagnosed in Australian dogs. Caroline Zambrano learns more about this condition and how to be certain your dog has the disease or not.

When I was researching the fussy eating article (published in the #84 Dogs Life July/Aug 2008 edition) – inspired by my older Dobermann who is extremely finicky with his meals – I noticed that my older, food-loving Dobie, Chase, suddenly stop eating. Alarm bells rang, as Chase has a bottomless pit of a stomach and is often our vacuum cleaner at home when we spill food on the floor.

I went through my notes from the interview with Dogs Life resident veterinarian Dr Michael Archinal, who had mentioned hypothyroidism as a possible medical reason for fussy eating. Then I noticed other symptoms, which contributed to my suspicions about this thyroid disease lethargy, rough skin and roller-coaster weight.

I took Chase to the vet and after some tests, he was diagnosed with hypothyroidism an endocrine disease in which the thyroid gland (located near the dogs trachea, just below the larynx) produces insufficient thyroid hormone. This meant lifelong trouble for Chase, as the thyroid hormone governs the bodys basic metabolism, including control of growth and development, and maintenance of protein, carbohydrate, and lipid metabolism.

Since his diagnosis last year, Chase has been getting regular check-ups to make sure his thyroid levels are normal and his bodys processes are functioning the way they should. The latest test results showed Chases treatment is working well, but I was surprised to find out that many canines on thyroid medication are not supposed to be.

Hypothyroidism is one of the most common endocrine diseases of dogs, Dr Shaun Mooney from Castle Hill Veterinary Hospital in NSW tells Dogs Life.

Sometimes, thyroid hormones are at unusual levels, but the thyroid gland does not appear to be dysfunctional called euthyroid sick syndrome. Because of this syndrome, hypothyroidism as a disease may be over-diagnosed, Mooney says.

There are two thyroid hormones produced by the thyroid gland thyroxine (T4) and triiodothyronine (T3). The whole process is quite detailed, but Mooney highlighted the main points.

When T4 levels are dropping, the pituitary gland stimulates the thyroid gland to make and release more T4, Mooney says. As thyroid hormone is required for normal cellular metabolic function in all cells of the body, when there is a thyroid deficiency, it can produce clinical signs in any body system.

This is why diagnosis can be difficult, as the symptoms may also point to other conditions, Mooney says.

Thyroid disease can occur in two ways hypothyroidism and hyperthyroidism. Hyperthyroidism is very rare in dogs and is not inherited. It is the result of excessive thyroid hormone production and causes an increase in basal metabolic rate (BMR), which is the amount of kilojoules burned at rest and contributes 50 to 80 per cent of energy used.

The most common cause is thyroid carcinoma, a malignant tumour, Mooney says.

The most common symptoms of hyperthyroidism are weight loss, increased appetite and enlargement of the thyroid gland. One can also see a change in behaviour, such as aggressiveness, gastrointestinal signs and changes to the coat.

Treatment for hyperthyroidism usually involves surgery, as well as a combination of irradiation and chemotherapy. Radioactive iodine therapy is not usually useful in dogs as it is in cats, Mooney says.

A thyroid test helps vets to diagnose thyroid disease, however, they also rely on other tests to make a final judgment. There is no single test that can confirm hypothyroidism, Mooney says. We need a history, clinical signs and clinical tests that support hypothyroidism. Ideally, we need a complete blood count and biochemistry, as well as urinalysis. Vets can also find further clues in the blood work, such as mild anaemia, high cholesterol or high lipids in the blood.

These tests are also useful to get an idea about general health and rule out other major diseases, he says. If there are clues that hypothyroidism may be present or clinical signs indicate the disease is possible, then a measurement of the thyroid hormone T4 levels can be done.

At this point, it is important to remember our euthyroid sick syndrome. If a dog has non-thyroidal illness, they may have abnormally low thyroid hormones, mimicking true hypothyroidism. Veterinarians are able to do further testing at this point to determine if the dog is really hypothyroid, Mooney says.

Such further testing includes a free T4 test, which is more sensitive and specific than total T4 measurement, and evaluating other hormones that play a role in stimulating the production of thyroid hormones.

Hypothyroidism can be caused by autoimmune destruction and idiopathic atrophy (shrinking) of the thyroid gland. In 95 per cent of cases, the cause of hypothyroidism is a decrease in production/release of T4/T3 from the thyroid. In other cases, the problem may also lie in the pituitary gland or hypothalamus. There is no sex predilection. Certain breeds are also predisposed to hypothyroidism.
Onset of clinical signs is typically two to six years of age, he says.

Unfortunately, thyroid disease has no cure, but it can be managed with daily oral thyroid hormone medication for the rest of your pets life. Treatment consists of two daily doses of thyroxine sodium. It is lifelong and the dosage is based on body weight, Mooney says. Your vet may need to re-test your dog in one to two months after starting your dog on thyroid therapy to make sure the levels are within the normal range. He advises dogs on long-term thyroid therapy to have a complete panel of tests every six to 12 months.

If a dog is truly hypothyroid, it will respond to the medication quickly, however, some changes such as the changes to the skin and coat may take months to resolve, he says. Symptoms of hypothyroidism:

It is important to note that hypothyroid animals will not usually have an increase in drinking and urination, which is seen in other endocrine diseases.

Researchers have found that some dogs have a genetic susceptibility to thyroid disease, although this idea does not have enough supporting data. The inherited form of the disease is autoimmune lymphocytic thyroiditis, and breeders should test their dogs and be wary of breeding from animals with the potential to further spread the disease. Breeds predisposed to thyroid disease, but not congenital disease:

Symptoms usually appear between two to six years of age, but blood tests can indicate the potential for disease before clinical signs appear. Unfortunately, a normal thyroid test at one year of age does not mean the dog will remain free of disease throughout its life.

Is the Diagnosis Correct?

Because of difficulties in diagnostic testing methods (especially before 1995), many dogs have been erroneously diagnosed with hypothyroidism and have been on medication for years. If you wish to re-test your dog now that newer testing methodologies are available, speak to your veterinarian for more information.