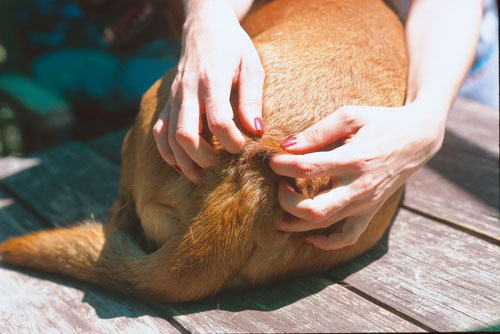 Tim Falk investigates everything you’ve ever wanted to know (but have been too grossed-out to ask) about dog poo.

Why do some dogs poo in the one spot?

Dr Margie Roser, a vet who presents a weekly pet radio show on 2CC Canberra, says that not all dogs like to defecate in the same spot. “Most just prefer not to defecate near where they eat, sleep and play. They do, however, like to mark their territory and will defecate and urinate in similar areas to mark their boundaries,” she says.

Depending on a dog’s personality, some will also continually urinate and defecate over areas that already have another dog’s scent. “Dogs get used to defecating on the same surfaces, whether that is grass, concrete or, heaven forbid, the carpet. If the dog is defecating in inappropriate places then you can train them with praise and treats to go to the toilet in an area you’d prefer,” Dr Roser says.

Why will some dogs not poo in front of people?

Some dogs are simply shy and private. Going to the toilet puts an animal in a very vulnerable position and some dogs prefer to do their business in private where there is no perceived danger around. “Some dogs perceive someone (animal or human) looking at them in the eyes to be a threat, so are unlikely to want to do their business when they think they are about to be attacked,” Dr Roser explains.

Why do some dogs cover or spread their poo?

It is thought that scratching the ground after urination or defecation in dogs is seen when they are marking their territory. It is more of a spreading exercise than a covering action, and they aim to spread their scent further and make a signature on the ground with their scratch marks and faeces.

What can I tell about my dog’s health from his poo?

It might not be the most glamorous job in the world, but examining dogs’ droppings can be a very useful tool for making sure they are healthy. Different disease conditions can be detected just by looking at the poo at home. “It is important that you look at your dog’s poos every day to makes sure they are normal and consistent. Normal poo is brown, cylindrical and glistening. It doesn’t have blood or noticeable mucus and it is easy to pass,” Dr Roser says.

“Fresh blood in faeces is always a concern and can be anything from a small scratch, to colitis to cancer,” Dr Roser says. “Watery, loose or excessive faeces can be features of many different conditions and is not normal.”

If your pooch’s poo is not looking normal, bring it in with your dog to the vets to have it examined, Dr Roser advises.

Why does my dog eat poo?

This dirty little habit is known as coprophagia and may involve the dog’s own poo, the dropping of another dog or even another animal.

There are some medical conditions that lead to coprophagia, such as gastrointestinal parasites or exocrine pancreatic insufficiency. Both of these conditions cause malabsorption of nutrients and leave the dog feeling hungry.

“It is often said that dogs eat their own poo because they are lacking in some nutrients; scientifically there are no reports to back this but, anecdotally, vets do see more coprophagia and pica (the act of eating things that aren’t food) in pets that are not receiving a balanced diet. However, the majority of the time coprophagia is a behavioural issue; they are either bored or they like to eat it because it tastes good to them,” Dr Roser says.

Coprophagia can lead to infections with parasites and bacteria. “As a deterrent for a dog who eats their own poo, feeding pineapple seems to make the faeces taste rancid. Some people find putting chili on the poo to be a strong deterrent also, although it seems that if you are going to do that then picking up the poo would be just as easy,” Dr Roser says.