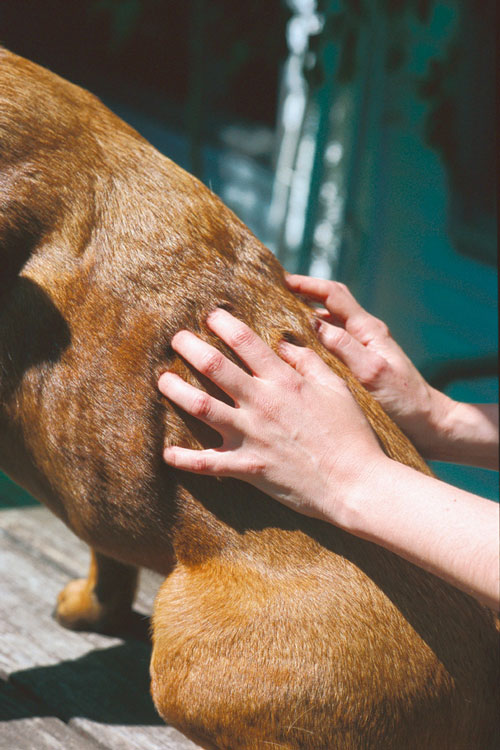 With allergies causing itching, sneezing and general discomfort in affected dogs, the DOGSLife Team look at the causes and treatment both natural and conventional for skin allergies in dogs

Allergies are the reason why 25 per cent of canine clients visit All Natural Vet Care in Sydney. This condition is as frustrating for the dog owner as it is common, says veterinarian Dr Barbara Fougere from the clinic.

With the possibility of the allergy being caused by any number of things in the dogs environment or diet, Fougere likens her job to having to detective work. It is never a simple 15-minute consult, she tells Dogs Life.

Symptoms are as varied as the possible causes. Many of our patients come to us after they have explored regular medicine and the allergy has not been adequately controlled or successfully diagnosed, Fougere says. Others want to explore the possibility of replacing or reducing conventional medicine treatments. Corticosteroids and cyclosporin drugs are common conventional treatments, but are not always ideal for long-term use. Immunotherapy, requiring ongoing injections, is another useful treatment, but some dog owners look for an alternative.

Fougere says natural methods used in conjunction with traditional treatments and working with specialists, such as dermatologists, provide the clinic with an 80 per cent success rate in treating chronic canine allergies. In some cases, there isn’t a cure, but the condition becomes more manageable, she says.

Initially, the detective work requires at least an hours consultation to compile a thorough history and examination. It is uncommon that a dog is allergic to just one singular thing; often is it a range of things, she says.

However, Fougere has treated patients with some peculiar allergies. We have treated dogs that have been allergic to their toys, household cleaning products or even another pet in the household, she says.

Symptoms are varied and can include skin, gut and even behavioural changes. The most common sign is itching and changes to the dogs coat and skin, she says. Skin is a reflection of what is happening inside the body if the skin or coat appear abnormal, it is normally a sign that something is not right inside.

Fougere says that while only some allergies are food related, diet plays a crucial role in treatment. Allergies are often the result of an underlying immune imbalance, she says. When the immune system is out of balance, the dog reacts to things in its environment or diet that it might not react to if its immune system was healthier. Diet plays a large part in correcting the imbalance. Once the overall health is improved, the dog will not be as susceptible to being over-reactive to other things.

Sometimes, removing just one or two of the offending allergens means symptoms are greatly reduced, even if there are proven allergies to other things. Treatment may include referral to a dermatologist to assist with diagnosis.

A range of natural treatments, including herbal, Chinese and Western, are used to alleviate symptoms and improve immunity and health, as well as treating underlying immune imbalances. Herbal medicines, acupuncture, homeopathy, environmental and nutritional medicine and other alternatives, including nutritional management, are used successfully to treat allergy patients.

The best advice for people who suspect their dog has an allergy is to get help as soon as possible and to take their dog to someone who can take the time to explore the problem in depth, Fougere says. A referral to a dermatologist is ideal, and for those wanting a different approach, holistic veterinarians can help, too.

Atopic dermatitis is a type of allergic skin disease triggered by a hypersensitivity to environmental airborne substances, such as pollens, moulds, spores or dust mites.

These are the same sorts of things that can trigger attacks of asthma and hay fever in people, Robson says. The most common airborne allergen in my patients is dust mites, and the simplest solution for the dogs that have this as their only allergy would be to keep the dog outdoors. This would eliminate a large majority of the allergic symptoms in these dogs, but it is not really a practical solution for many owners, as a lot of people like to have their dogs indoors. Of course, keeping the dog outside is not a solution for dogs that have pollen allergies also, as they then have significant exposure to problem allergens wherever they are.

Robson says the second-most common type of allergy in his practice is contact allergy. The trigger in most of these cases are not household chemicals, but common plants, with succulent creepers from the Tradescania family (Wandering Jew) often the culprit.

Flea allergy is less of a problem now than it ever was, due to the many modern flea treatments now on the market, he says.

Generally, flea-allergy symptoms include itchiness around the rump area, but not on areas, such as the feet. Foot licking and chewing is very common with atopic dermatitis and less often with food allergy. Robson says the least-common canine allergy seen in his practice is related to food. But this is not the case necessarily in some other parts of the world, where food allergy appears more common, he says. These allergies can usually be diagnosed using elimination-diet trials.

With airborne and contact allergies, Robson says clinical diagnosis can be more difficult in some cases, as there can be grey zones, with symptoms appearing very similar for both, and to complicate things further, some dogs will have both types of allergies.

Patch testing can be used in diagnosing contact allergies, where we actually apply some of the suspicious material (usually a plant sap) to the skin and wait and see if a rash appears, he says.

Avoidance trails can also be useful, he says. For example, a dog that is suspected of having a plant allergy can be kept indoors and away from anything green when outside for two weeks, to help pinpoint the general location of the cause.

With diagnosis of atopic dermatitis, we first try to rule out everything else first, including infections and bacteria, which are commonly present as secondary problems, he says. Intradermal testing can then be used to diagnose the exact triggers – a fairly precise method, where tiny amounts of the allergen extracts (such as the dust mites and pollens) are injected into the skin.

A reaction in the form of red lumps will indicate allergy to the particular allergen injected. Once this had been achieved, allergen-specific immunotherapy (or allergy vaccine) can be used to treat the allergy or allergies long-term. This is where an extract of the allergens that the dog tested positive to is injected into the dog in slowly increasing amounts over a period of time. This enables to dog to gradually build up a tolerance to the things that trigger the allergy.

Robson says about two-thirds to three-quarters of dogs treated with vaccine therapy respond, but to varying degrees. The vaccines are not the perfect treatment, as some dogs will still need to continue small amounts of other forms of treatment along with vaccines, he says. Some will require only the vaccines and only a few will enjoy complete remission. It is also important to note that immunotherapy is only effective in atopic dermatitis, and is not effective for the other types of canine allergy.

Allergies can rarely be cured, but the vast majority we can manage with a combination of symptomatic treatments, identification of the triggers and subsequent avoidance strategies and immunotherapy vaccine if appropriate. Our goal is to make each dog comfortable, using the most effective, practical, safest and economic option for that dog, he tells Dogs Life.

Robson says that while all breeds of dogs could be affected by allergies, some breeds have a genetic disposition to suffer from specifically atopic dermatitis. These are Terrier breeds in general, including Staffordshires and Bull Terriers, but especially West Highland White Terriers, Maltese, Labradors, Golden Retrievers, Shar Peis, Boxers, German Shepherds and Cocker Spaniels.

There are also some breeds we rarely see in the clinic with allergy problems, including Whippets, Greyhounds and Poodles to a lesser extent, Robson says.

To assist your veterinarian with diagnosis and treatment of your dogs allergies, keep a journal regarding its environment and diet, symptoms and noticeable changes.

Skin conditions from allergies left untreated can lead to nasty bacteria, infections and skin complaints that can be very distressing for you and your dog. At the first sign of allergy or skin condition, consult your veterinarian.