DogsLife · Dogs News · Dog Health · Getting fit with your dog

Getting fit with your dog 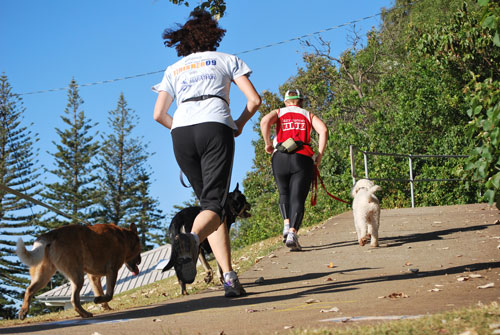 If you’d like both yourself and your dog to be healthier and happier, all you have to do is start getting fit with your dog, writes Laura Greaves.

More than 60 per cent of Australians are now classified as overweight or obese. It’s an alarming statistic, but what’s every bit as shocking is that almost half of our pet dogs are also losing the battle of the bulge.

That’s right, research suggests as many as 40 per cent of Australia’s pet dogs are now overweight or obese, too. Coincidence? Queensland veterinarian Audrey Harvey doesn’t think so.

“Half the dogs that come into the surgery where I work need to lose weight. They’re on arthritis medication and pain relief,” says Dr Harvey, who is based near Brisbane. “Our dogs are naturally more athletic than we are. I think they’re capable of an awful lot.”

In a bid to encourage Australia’s dogs and their owners to get off the couch and embrace a more active lifestyle, Dr Harvey devised Pooch to 5k (www.poochto5k.com), a 12-week program that gradually trains people to run five kilometres non-stop – with their dogs. Pooch to 5k running groups are being established around Australia.

The physical and psychological benefits of running are well documented. It improves cardiovascular fitness and reduces the risk of heart disease and diabetes, relieves stress, boosts mood and is ideal for weight loss. Some Pooch to 5k runners have shed up to 12kg over the 12 weeks of the program.

What’s really great is that these benefits aren’t exclusive to humans. Running also helps dogs to lose weight, and a recent US study found that dogs also experience the fabled “runner’s high”, where mood-boosting hormones are released during exercise.

“One lady in the program has a Sheltie who missed out on a lot of the crucial puppy socialisation and would bark at everything and everyone, but she says he doesn’t bark at all since she’s been running with him,” Dr Harvey says.

So you like the idea of running with your dog, but you’ve never so much as run for the bus? Don’t worry – virtually everybody, whether canine or human, can become a runner.

The important thing is to start very slowly. Try jogging for 60 seconds and then walking for 90 seconds. Repeat this cycle eight times, three times per week. The next week, increase to 90 seconds of running and two minutes of walking. Increase the total time of each session by about 10 per cent per week and you’ll soon notice significant improvements in your stamina, speed and performance.

“It’s not a race through the 12 weeks. I did week three three times. If you’re stuffed and you can’t move, simply repeat a week,” Dr Harvey says. “The point is that you’re building a habit that’s going to improve your wellbeing and your dog’s wellbeing, so keep it up.”

Trying to do too much too quickly will only lead to injury, burnout and frustration for you – and it could be disastrous for your dog.

“It’s never too late to start running, as long as you have the okay from your vet. We’ve had nine-year-old dogs start running in the program,” she explains. “But no matter what age, your dog needs a vet check first. It all boils down to going at your dog’s pace. Even if it seems too easy for your dog, that’s okay. You’re better off doing that than going too far the other way.”

As Dr Harvey points out, when you’re running with your dog it’s not all about you. Your dog’s welfare must be your top priority. That means taking a number of important steps:

• Wait until your dog is at least 12 to 18 months of age before beginning a running regime. Starting too early will put too much pressure on your dog’s growing bones and joints, which can cause serious problems such as arthritis and hip and elbow dysplasia in later life.

• Take all the necessary accessories, including plenty of water for both of you, sunscreen and poo bags. Once you build up to longer runs, consider carrying a snack for your dog. “A group of Pooch to 5k runners did the Gold Coast Twilight half marathon with our dogs, and we gave the dogs a little snack at the halfway point,” says Dr Harvey. “Snacks aren’t necessary for shorter runs because dogs metabolise fat – they don’t use carbs like we do.” If you’ll be running through bushland and you live in a paralysis tick-prone area, make sure you regularly apply anti-tick serum.

• Know when your dog has had enough. Dogs can’t tell us when they’re tired, so it’s up to us to spot the signs. As well as being active herself, Dr Harvey is the owner of one very active dog: Guinness, a working Kelpie who never seems to tire. “Guinness has run 26km with me, sat down for half an hour and then got up as if to say, ‘Let’s go again!’” she says. “But once their tongue starts hanging out and they start lagging, it’s really time to stop.”

• Keep an eye on Fido’s feet. Dogs don’t have the protection of those expensive running shoes – all that stands between them and the terrain is their paws. “Check their feet because bitumen gets hot in summer and little abrasions can be painful,” she says.

• Mix it up. Dogs appreciate variety just as much as we humans do, so don’t run the same route every day. Why not run in the bush or on the beach one day?

• Be respectful of other people. Strange as it may seem, not everyone likes dogs. If you’re running in busy public spaces, such as parks or promenades, make sure your dog isn’t disturbing anyone else. Always run with your dog on a leash, both for his safety and everyone else’s comfort. And it goes without saying you must clean up after your pooch.

Dr Harvey also stresses that some breeds are just not suitable for running, particularly bracycephalic – or flat-faced – dogs like Pugs, Boston Terriers and Bulldogs, as well as breeds that are prone to overheating.

Very overweight dogs should lose weight through a controlled diet and low-impact exercise like swimming before starting to run, so as not to stress their joints. If in doubt, ask your vet.

“Running has brought us closer together!”

“I’ve always played sports, but I never thought I’d be one to do long-distance running. I was going through a lazy stage and I wasn’t at my fittest. I was a bit hesitant at first; I mainly did it for Bobbie, but soon I really started to enjoy it.

“Border Collies are really active, but Bobbie seems to be more active than most. I’d take him out for long walks and day trips but it never seemed to be enough. We’d get home and he wouldn’t even seem tired. I thought running might give him more enjoyment.

“He loves it. When we’re in the car he seems to know where we’re going before we get there. If I take him out for a walk the day after a run, he has a skip in his step, like he’s extra happy with himself.

“I love the bonding that we get when we run together. Sometimes he just looks up at me with his tongue hanging out and I just know he’s enjoying it. I’m happy I can give that to him.

“Bobbie likes to be in front so he doesn’t let me slack off. My body has transformed and I’ve lost a lot of weight. Running with Bobbie has given me confidence in myself. I’m not put off when things seem tough. I always think ‘I can at least give that a try’.”

While running with your dog doesn’t require any special equipment, these handy gadgets just might make your morning jog a little easier.

Ruffwear Singletrak pack
$139.95. waggle.com.au
Why not let Fido carry his own water on longer runs? This pack fits your dog comfortably and features two refillable water bladders and two pockets for essentials like keys and poo bags.

Aniwell Filta clear dog sunscreen
$19.95. waggle.com.au
You wouldn’t head outside for a run without sunblock, and your dog shouldn’t either.

Popware collapsible pet bowl by Dexas
$11.95. www.bowhouse.com.au
Folds down flat so it’s easy to carry on your run.

Five reasons to run with your dog

1. It reminds you that running is fun. When you’re running alone, sweating and suffering, it can be easy to forget that running should be joyful and freeing. Your dog will help you to remember. There’s just something about the sight of a pooch in full flight, all four feet off the ground and tongue hanging out: you can’t help but smile!

2. It’s great for your body – and your dog’s! Running improves cardiovascular fitness and strength, and promotes weight loss. And that’s not just the case for human runners – dogs experience these benefits, too.

3. It’s great for your mind – and your dog’s! High-intensity exercises release endorphins, the body’s “feel-good” hormones. New research reveals that dogs also experience this “runner’s high”, so running together means you’ll both be happier.

4. Dogs don’t quit. Studies show that people are more likely to stick to an exercise regime if their workout buddy is canine rather than human. Your dog is always raring to get out and run, so you’ll be less likely to make excuses and skip your jog.

5. Your dog will be better behaved. Providing your dog with adequate physical and mental exercise means he’s less likely to become bored and destructive at home. That means sweet dreams for him and peace and quiet for you. After all, a tired dog is a well-behaved dog!