Fighting bush ticks on dogs: how to find, remove and prevent ticks 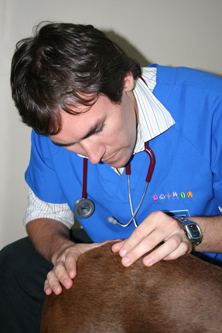 Thousands of dogs in Australia are affected each year by tick poisoning. With a bit of common sense and a lot of vigilance, your four-legged friend need never become a tick statistic. We find out the symptoms and show you some clever ways to fight bush ticks on dogs

It happened so quickly. One day he was coughing like he had cold and acting sluggish. The next day he was dead. Elaine Williams is describing the death of her beloved German Shepherd pup from tick paralysis.

Three main types of tick affect dogs: the brown dog tick (Rhipicephalus sanguineus), the bush tick (Haemaphysalis longicornis) and the paralysis tick (Ixodes holocyclus). The first two can prove carriers for a range of infectious agents, but rarely cause fatalities.

Not so with the deadly paralysis tick. Around 20,000 dogs are affected each year in Australia by the poison of the adult female. The good news is the success rate for treating dogs for tick poisoning is now a respectable 95 per cent. Treatment, however, can be costly so prevention is always better than cure.

One vet that has seen her fair share of bush ticks and their crippling effect on dogs is Dr Lee Hammer. She has a practice in Avalon, NSW, an area she claims to be the paralysis tick capital of the world.

Wed see 100 cases a year that we admit and treat, Hammer told Dogs Life. Needless to say, Hammer has had a lot of experience with this quiet killer.

Ive been known to diagnose a tick from a dogs cough in the waiting room, she said. It was a gagging, choking cough caused by paralysis at the back of their throat.

It is through her experiences we can learn some of the more subtle signs of tick poisoning.

We had a Collie come in with a broken leg. It had tried to jump the fence and got stuck. There was something in the way it was trying to swallow an exaggerated swallow so I decided to clip the dog and sure enough, there was a tick, she said.

It was the encroaching paralysis that had rendered the dog unable to make the jump over the fence.

Sometimes we don’t even find the tick; its engorged and dropped off, but the symptoms are enough to make the diagnosis, she said.

For Hammer, the most common signs are a cough or vomiting, wobbly legs or dogs that are unusually quiet.

Prevention, they say, is better than cure, and when it comes to preventative measures, you can do a number of things to minimise the chances of tick fatality. The most important is awareness both of your surroundings and your dogs condition.

Paralysis ticks occur mainly along the east coast of Australia, from north Queensland to northern Victoria, with the danger period occurring from spring through to early summer. September to December are the most active months, but in the northern parts of the country, where moist bushland is prevalent, they can occur all year round.

Dog owners should remain aware of any increases in temperature or humidity or higher-than-average rainfall in the off-season as this could spark an infestation. If you are taking your dog into a new environment, find out what the incidents of bush ticks are in the area.

For those living in tick-prone areas, it is always a good idea to make your own yard as uninviting to ticks as possible. Measures include keeping the lawn well mowed and mulch and leaf litter reduced to a minimum. Insecticides, such as commercial sprays, are useful, particularly with infestations, but keep in mind issues of toxicity.

It is also a good idea to try to control vermin and wild or feral animals around your home, particularly possums and bandicoots, as they are excellent tick vehicles.

Tips to check for bush ticks on dogs

Veterinarians advise nothing beats regular and thorough checks of the dog itself. The best time to do so is straight after walks. Make sure you check the coat with a fine tooth comb ticks are much easier to get rid of before they attach and you could find one crawling around looking for a prime location!

If your dog has an especially thick coat, consider clipping it for the spring/early
summer months.

Bush ticks are not easy to see, so touch is very helpful in locating the telltale lumps and the craters they can leave behind. Bush ticks carry a lot of diseases, so some experts recommend wearing latex gloves. You may find this impedes your sense of touch, but remember, if you use bare hands, wash thoroughly with soap, especially after handling a tick.

A good tip for those less dexterous or squeamish about feeling for ticks is to use a blow-dryer to part the fur.

The most important thing is to be systematic in your search. Though ticks can attach anywhere, most bush ticks are found around the face, head/ears and neck areas, as well as the front legs. Start your search at the top/front and systematically work your way to the back. Dont forget to check between the toes, under the armpits and the skin folds around the lips and ears.

Monika Biernacki and her group of dedicated volunteers run Doggie Rescue, a private charity that has found homes for more than 7,000 impounded dogs around Sydney. While Biernacki sees vigilant checks as paramount to tick control, she said because of the number of dogs we have in our care, we use tick collars and find bush ticks die and tend to drop off.

A range of dog collars, sprays, topical solutions and pills have been devised in recent years to repel bush ticks. While these agents can be of great assistance, pet experts always suggest to carefully adhere to the instructions so you do not compromise the health of your dog and the efficacy of the product.

For example, dog collars are more effective when kept dry. Collars are also poisonous if ingested and have been known to produce allergic reactions and rashes. If your dog becomes sluggish or snappy, take it off and seek professional advice.

It is also important to check your dog for ticks before putting on the collar; collars are most effective in repelling ticks and may not kill those already attached. Sprays and rinses are labour intensive and, like collars, can only be used on dogs past a certain age. You also need to ensure 100 per cent coverage at toxicity levels high enough to kill the tick, which means plenty of reapplications.

Tablets ensure the insecticide reaches its target, but correct dosage is vital. Consult your vet on the correct dosage and leave only one person responsible for administration to prevent double dosing and to ensure correct records. Similarly, while applications are generally less frequent with topical solutions, you need to maintain caution with regard to dosage and administration as these, along with other chemicals, are also toxic.

For those uncomfortable with the idea of using insecticides, particularly dog owners with children, a growing range of natural and homeopathic medicines that claim preventative and remedial properties are also available on the market. Among those touted are garlic tablets, herbal shampoos, botanical oils and even brewers yeast.

While chemical and natural measures may reduce the risk of tick paralysis, none guarantees it in all cases. It is therefore essential that you supplement these with daily grooming searches to minimise exposure.

What to do if you find a tick on your dog?

The first thing is to establish if it is a paralysis tick. The toxic female is lighter in colour than the bush or brown tick, with longer legs and larger mouthparts. Unfed females are yellowish in colour and become greyish with a brown line circling the body as they engorge.

If it is a paralysis tick, watch your dog closely to determine whether it is showing any signs of poisoning.

If it is, call a vet as soon as possible and describe the dogs condition they should be able to tell you how urgently your dog needs treatment.

You don’t have a lot of time, stressed Biernacki. Experimental work has shown that it can take as little as 24 hours between first signs of paralysis to death for a dog with three to four bush ticks.

If symptoms manifest outside of normal vet hours and you don’t have access to a 24-hour service, try to keep your dog as relaxed as possible and do not give it anything by mouth to avoid choking, should throat paralysis set in, until you can get to a vet.

Dont try to remove the tick as this may antagonise it. Kill it while it is still attached with a few drops of insecticide, but use agents that kill by paralysis, such as those based on pyrethrin or fipronil. Chemicals based on organophosphates kill by exciting the tick and that is one thing you don’t want.

Once at the vet, depending on how sick the dog is, the vet will administer Tick Hyperimmune Serum. Be aware there is usually a time lag before it becomes effective, so your dogs condition may still deteriorate for a day or more following initial treatment.

Even if you remove a tick, the dog can get sicker for up to 48 hours after removal, Hammer advised. Keep a close eye on your dog and if any tick signs develop, if they haven’t already, then contact your vet immediately.

How to remove a bush tick

If your pet doesn’t show any sign of poisoning, you can kill the tick using the same method as above or removing it by hand. A tick can be removed by grasping it firmly between the first finger and thumb as close to the skin as possible and pulling gently, but firmly.

Try not to twist, jerk or crush the tick. If the tick is too small, use specially designed tick tweezers or a tick scoop if you have one, or a suitably fine pair of tweezers if not. Try to get the head out as it can lead to infection, but will not continue to poison. Use a fingernail or needle if necessary. Do not use substances that could irritate the tick, such as kerosene, turpentine or petrol.

To dispose of a tick, make sure you kill it first by dropping it in alcohol or an insecticide. Flushing it down the toilet or throwing it in the bin will not kill it and squashing it with fingernails is unhygienic and difficult to do. Consider saving the tick in a jar of alcohol for later identification in case the dog fails to rally.

During the first 24 hours of recovery, limit your dogs menu to a little water and the following day to soft foods in small amounts to minimise the risk of choking.

If all is good, go back to normal meals by day three, but avoid strenuous exercise or over-excitement for a few weeks afterwards (up to six weeks for a working dog).

Remember, it can take up to two months to fully recuperate, but given time and plenty of love, your dog should recover without any permanent side-effects.

One Response to Fighting bush ticks on dogs