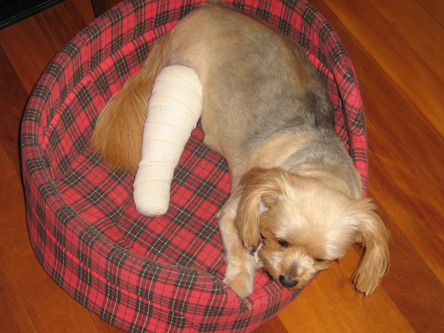 Like humans, animals experience pain. The only difference is how they convey it. Wendy Barlett finds out what to look out for and how to help ease pain in dogs.

Our pets cannot tell us when they are in pain they can only show us. To understand the clues, we need to interact with them daily, familiarising ourselves with their normal behaviour, temperament and personality and with the common signs of pain.

Veterinarian Dr Carol Elliott from the Wellington Road Veterinary Surgery in Mount Barker, South Australia, says owner observations are an important factor in deciding whether or not pain relief is required.

Owners often tell me their dog has been depressed, off its food and not behaving like its normal self, Elliott told Dogs Life. Other signs an animal in pain may exhibit include panting while resting, lethargy, limping, shivering, disinterest in normal activities, abnormal toileting habits, squinting of eyes, scratching at ears, restlessness or insomnia.

Before pain can be treated, the difference between acute and chronic pain needs to be distinguished. Acute pain, as in trauma or surgery, can be treated with morphine-like drugs or non-steroid, anti-inflammatory drugs, which work by blocking the pain-inducing chemicals in the body.

In acute pain, there’s obvious pain like lifting a leg or crying when touched in the area, said Elliott, who sees many puppies with acute pain caused by a fall or rough play with another dog.

Treating chronic pain, as in arthritis, cancer and dental problems, requires a different approach and often the animals pain goes unnoticed, especially in an older dog or a dog with a high pain threshold. Canine health experts do not recommend long-term use of steroids as they cause side effects like kidney and liver disease and vomiting.

They’re likely to cause gastric ulceration and they’re not good to use in dogs with heart failure, she warned, although sometimes steroids are prescribed in the final stages of cancer.

When an older dog experiences difficulty getting up and down, its often considered a sign of old age. This is true, but a lot of the time they’re slowing down because they are in pain, said Elliott.

We check the amount of exercise they have, the bedding they’re sleeping on and there’s also a course of injections we can give which is as close to a natural drug as we can get, she said. The injections improve the health of the cartilage and encourage joint fluid to become thicker.

Pain-relieving drugs are expensive when used in long-term chronic pain. We try not to have our animals living with chronic pain on these long-term drugs for long, she said. We try to provide pain relief in other ways.

Supplementing the diet with Glucosamine and fish oil (a natural anti-inflammatory) seems to help.

Some of our arthritic dogs are referred for acupuncture, Elliott said, adding that its also useful for patients with hip dysplasia, which in itself is not painful, but causes arthritis and therefore benefits from the same treatment. Acupuncture has been known to help relieve symptoms of epilepsy, chronic digestive upsets and lick granuloma.

If we can avoid using drugs which have a risk of side effects, we do, she said.

Elliott sees many dogs which are off their food, have foul-smelling breath, yelp when anyone touches their mouth and have clearly been in pain for some time. Dental problems are often the cause, but dogs often experience chronic pain before owners realise there is something seriously wrong.

It’s hard to see the teeth at the back of the mouth and whether they’re badly infected, she said.

Elliott said she gives two types of pain relief after major surgery: one is an opioid (a drug similar to morphine), which is in the sedative given to the animal before surgery, and the other a non-steroid anti-inflammatory.

As there is a low risk of damage to the kidneys when using non-steroid anti-inflammatory drugs, we tend not to give them until we know the animal is safe, awake and well hydrated, Elliott said.

Some types of human medications are wrongly misconceived to be safe to use in dogs. I never recommend using human drugs in dogs, Elliott warned. The only one you can use safely is Aspirin, but its got a much higher chance of causing stomach ulcers than those specifically designed for dogs and its not as effective.

Elliott recommends talking to your vet before giving any over-the-counter or human medicine to your dog. Similarly, if your dog is on pain relief medication and you notice signs like diarrhoea, yellowing of gums, vomiting, change in drinking and urination habits or scabs or redness on the skin, stop the medication immediately and speak to a vet.

We’ve had a good response with it, she said, referring to the remedy. Watson has seen many owners return satisfied with the use of the herbal remedy, glucosamine and fish oil. They tell her that they have noticed their animal is no longer stiff in the mornings and is jumping up and down again.

Watson also suggests managing the dogs diet by avoiding processed wet and dry food. I believe it increases the inflammation state within the body, she said, recommending foods that are uncooked, raw meat and vegetables. We avoid the nightshade vegetables because they aggravate the condition. (Nightshade vegetables include potato, tomato, eggplant, capsicum and chilli.)

Every once in a while we hear of a dog eating human leftovers and they could contain anything like mashed potato or a bit of capsicum or a meat dish cooked with a bit of chilli, she said.

To relieve low-grade, long-term pain associated with arthritis and degenerative disorders, nutriceuticals are often used but these may take up to eight weeks to have an effect. These include chondroitin sulphate, flaxseed oil, glucosamine, methylsulphonylmethane and Omega 3 and 6 fatty acids.

The range of herbal remedies she prescribes for humans can be adapted for use in dogs. One of the cancer herbal remedies is made with a molasses base instead of an ethanol (alcohol) base.

Nobody wants to see their pet uncomfortable and in pain, but sometimes we are unaware of the severity of their painful conditions. Early recognition of the common signs reduces suffering and improves quality of life. A pain-free dog is a happy one and we all want the best for our four-legged friends.

Raani, a nine-year-old short-haired German Shepherd, suffers pain from systemic eczema/dermatitis. Her skin is very red and there are blisters on the skin near her groin and on both sides of her mouth, said owner Della Steen, who also noticed a buildup of black material in her ears after Raani was scratching at them.

The vet prescribed drops for Raanis ears and cream for the mouth irritation and after three months, the blisters and redness disappeared.

She is still on the cortisone but we have it down to a quarter of a pill a day, Steen told Dogs Life, adding that Raani will need to be on this for the rest of her life to control inflammation.

Raani also experiences pain when walking due to tender shoulders. We wonder whether its because she flies out of her hammock after birds in the yard and the jumping jars her legs, said Steen.

The vet agreed and now Raani sleeps on the ground on a piece of carpet. A series of weekly injections will improve synovial fluid around her joints. The vet believes Raani is in the early stages of arthritis and has prescribed fish oil to help reduce inflammation.

A condition that causes severe pain, Beagle Pain Syndrome, is a rare form of meningitis and its thought to be an inherited condition affecting the animals immune system. But as studies have yet to prove this due low case numbers, breeding from an animal diagnosed with this condition should be avoided. Meningitis is where the membranes lining the brain and spinal cord become inflamed and, if left untreated, can be fatal.

Diagnosis is done by taking blood and fluid from the spinal cord. Experts must rule out bacterial meningitis, spinal tumours and cervical disease to prescribe correct treatment, which involves steroids to reduce inflammation.

The condition appears in Beagle puppies between the ages of four to 10 months, but it can affect older dogs and there have been some cases affecting Boxers and Bernese Mountain Dogs. Symptoms include shaking, hunched posture, fever, lack of appetite, stiff neck, cervical pain, muscle spasms, lethargy and difficulty opening and closing the jaw.

Sometimes the symptoms may disappear after a few days if left untreated, but within months they may return. The animal may have to be on a low dose of steroids for life. For more information about this condition, speak to your veterinarian.