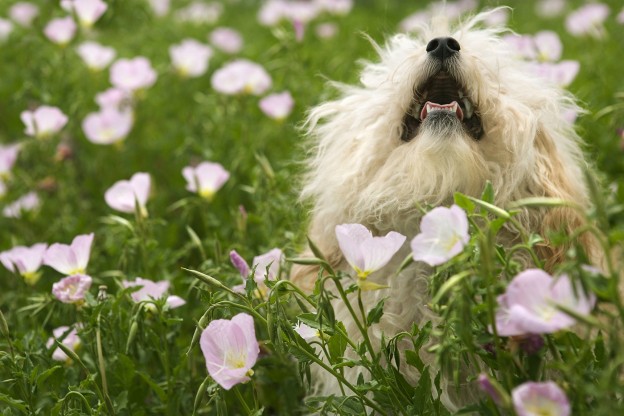 Surviving your bitch’s first time in heat can be a challenge. Carrol Baker speaks to experts about dogs on heat/in season information and where the responsibility of an unplanned pregnancy lies.

I knew doggy love was in the air the day my Golden Retriever looked longingly over the fence at the Staffy next door. With a provocative flick of her tail, Roxy the Staffy sashayed across the lawn in his direction. Whining and whimpering, my dog Benson could hardly contain himself. Roxy was undeniably in heat.

I knew next to nothing about the reproductive nature of dogs. How long are they in heat? How can dog owners protect their female dogs from unwanted suitors? Are male dog owners liable if their dog jumps the fence and impregnates a bitch? Armed with my trusty notepad, I set off in search of some answers.

How does a bitch’s heat cycle work?

First up a quick anatomy lesson. Most dogs will be in heat approximately every six months, but some can cycle every eight months. Heat cycles run in phases the first phase is called proestrus and it lasts from five to nine days.

You’ll notice bleeding and swelling of the vulva area, increased urination and lots of male dogs hanging around, says Dr Kersti Seksel, veterinarian and registered specialist animal behaviourist. In the first phase, shes busy putting out pheromones and telling the boys in the district shes coming on heat, but she wont let the male breed, she says.

Peak time for conception is the second phase oestrus. This is when the female is more receptive to the male, says Seksel, Dogs Life resident animal behaviourist. This can last anywhere from four to 13 days. Most female dogs will stand still and hold their tail to the side when a male dog tries to get up close and personal.

Some bitches can be very selective as to what dogs they will let mount them, while others are not so choosy, Seksel says. Some just don’t like other dogs and some are promiscuous they’ll mate with any colour, size or breed. Others might not feel ready to mate it depends on the individual dog, she says.

Seksel shares some sure-fire signs that your dog is in her peak conception stage:

As the female starts to go out of heat or enter the final two phases dioestrus (averages two months) and anoestrus (lasts up to five months) she will be non-receptive to male dogs.

It is important to remember that peak fertility dates are only an approximate guide, as they can vary considerably, Seksel says. To avoid unplanned pregnancies, its a good idea to keep your female dog confined for three weeks once you know she is in heat.

If you do plan to breed from your dog, a visit with your vet to ensure your dog has a clean bill of health is a must, Seksel says.

Your female dog will come into heat from when she is around six months of age. And if you think your dog can’t get pregnant in her first heat cycle, you are wrong!

To spay or not to spay?

Unless you plan to breed, to prevent the unwanted pitter-patter of little paws, its generally recommended bitches should be spayed before the first season.

The related health benefits from spaying include a decreased chance of mammary tumours and less likelihood they suffer pyometra (infections of the uterus) or false pregnancy, Seksel says.

If a dog is experiencing false pregnancy, it is likely to lactate, mother inanimate objects and have a distended stomach. For mild symptoms, treatment isn’t necessary, but in some cases veterinary intervention is needed.

If you have a male dog and don’t plan to breed, its also a good idea to have your dog spayed, Seksel adds. They have reduced risk of testicular tumours, prostrate problems and they’re generally better behaved and less reactive to other male dogs, she says.

Spay your dog and you’ll also be doing your bit to reduce the crowding of animal shelters across Australia. Over the past five years, the RSPCA has received more than a quarter of a million dogs, many of which were the result of indiscriminate breeding and unwanted pregnancies, according to RSPCA Communications Officer Kylie Maloney.

The bottom line is that we as a community currently breed more pets than we can find homes for, Maloney tells Dogs Life. Deliberate or accidental breeding of animals by non-professional or unregistered breeders musty be significantly reduced in order to manage pet overpopulation.

Turning up the heat

If your female dog is in heat, you’ll need to protect her from unwanted suitors. Even if your four-legged best friend is well trained, she will give in to her raging hormones, according to the experts.

Should you keep your female dog indoors to keep her safe? It will be challenging to keep your dog enclosed indoors if it isn’t used to being inside. Some owners with female dogs in heat build fully enclosed runs to keep their dogs safe. If you need assistance or advice, contact your breeder or the RSPCA about the benefits, Maloney suggests.

When walking your dog, consider taking her for a drive and then walking her in another area. Otherwise, she will leave a scent trail back to your home. They leave pheromones around, Seksel says. That’s not to say the dogs in the district wont pick up her scent, but you don’t need a Hansel and Gretel trail of crumbs telling them exactly where to come.

If you know a neighbouring dog is in heat and your dog is entire, you need to ensure he is secure. Most male dogs will do virtually anything to get acquainted with a female dog in heat.

How can you make your yard escape-proof to keep your wondering Romeo home? The best way is with a good strong fence, Maloney says.

The fence should be sturdy, with no way for your dog to escape or for another dog to enter. This means the fence must be tall enough so that your dog can’t jump over it and it must also be impossible to dig underneath or squeeze through a gap. If there is a gate in the yard ensure it latches properly and keeps the yard secure, she says.

Its also important to tell visitors to your home to be vigilant about shutting fences and gates.

These days, every breed imaginable of designer dogs is on the market from Labradoodle to Cavoodles and more. These mixed breeds take into consideration individual breed temperaments and physical characteristics to produce a good match. But what about indiscriminate breeding? What if a much larger dog impregnated a smaller breed? If you know this is the case, your first port of call should be your vet, Seksel says.

Generally, small bitches wont mate with big dogs because physically its quite difficult to do, and its difficult to give birth, so there is a natural selection against it, she says. But if the dogs have managed to successfully mate, its a good idea to have the pregnancy terminated.

Seksel adds that since a female can attract so many males while she is in heat, a litter can actually have more than one father!

Whose responsibility is an unplanned pregnancy?

If your male dog jumps a fence and is caught with a female dog in heat, do you have any legal obligations?

Animal management legislation is the responsibility of your local council and varies widely between states and territories. However, these issues are matters of law according to a spokesperson from the Queensland Law Society (www.qls.com.au) and its a complicated issue.

As the owner of the bitch, you could bring civil action for negligence against the assumed owners of the dog, he says. But you’d need detailed witness statements from those who have caught the dog in the act. By way of defense, the owner of the male dog can counter sue that the owners of the bitch haven’t excised due care in properly confining their bitch while she was in heat.

The Queensland Law Society recommends consulting with a solicitor to find out your rights.

As far as the budding romance between Benson and Roxy, they’re still great mates, but thankfully there will be no pitter-patter of little paws. Roxy’s owner enclosed her in a run and Benson has now been spayed.