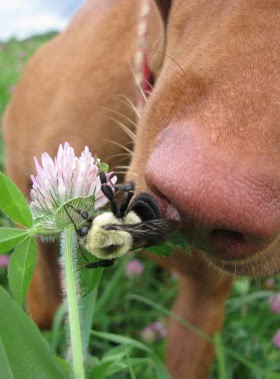 There are all sorts of creepy crawlies out there, and chances are, at some point in your dogs life it will get bitten whether its by a mosquito, spider, tick, bee or flea. Knowing what to look for could save your dogs life, discovers Sunny de Bruyn.

In short, Sydney veterinarian and author of First Aid For Dogs, Dr Justin Wimpole, says, Get to know your dog. Familiarise yourself with its normal breathing, eating patterns, how and when it urinates and defecates, heart rate, energy levels, behaviour and general demeanour.

If your dog has been bitten, Wimpole says the first thing you should do is reduce swelling by applying a cold pack to the area.

This is particularly important if the dogs throat swells and breathing becomes restricted, he says. It is vital to then try to keep your dog calm. In the case of general insect bites, if there is a stinger, you should remove it if possible.

Ticks have small brown bodies that are flat and oval, but as they engorge they become darker and rounder. They tend to be found on your dogs head, especially in the ears and under the collar.

If not treated, your dog can suffer from tick paralysis, which can cause death. When bitten, the tick toxin causes a slow, progressive paralysis by blocking the motor nerves of the body.

Symptoms of tick paralysis include change in the pitch of the bark, ascending paralysis (starting from the hind limbs and progressing to the forelimbs), difficulty breathing, vomiting, red gums and collapse. Remove the tick with a tick remover by twisting it, or with tweezers by levering it off, gently rocking it back and forth. Be careful not to squeeze the body, as this will release more of the toxin into the skin, warns Wimpole.

Dont give your dog food or water until its been checked by a vet. Even after you remove the tick, the toxin still circulates in the blood of the animal for 48 hours, so it will get much worse before it gets better. Its best to check with a veterinarian whether the animal needs antitoxin. A monthly tick treatment is a must, such as one applied to the back of the neck once a month.

Bee stings are rarely lethal, but your pet may have an allergic reaction and require veterinary care. If your dog is bitten on the throat, its airways may be compromised and its breathing restricted, which is extremely dangerous.

Most dogs will have a noticeable allergic reaction to a bee sting. A lump will form at the site of the sting and your dog may get hives on its body. Check carefully the sting may be on the roof of the mouth or on its tongue. Remove the sting by scraping it sideways with a knife or credit card, or even your fingernail. To reduce pain and swelling, apply a cold pack or piece of ice to the affected area. If your dog appears to be having trouble breathing, take it to the vet immediately.

Fleas are highly specialised bloodsucking parasites that live on animals. They are light brown to mahogany in colour and roughly oval shaped.

Apart from making the life of your dog miserable due to constant scratching, if your pet is allergic to fleas, just one bite can cause allergic dermatitis.

If your pet is suffering from an allergic reaction to a fleabite, it can scratch so much that the skin bleeds. Sores and hairlessness may result, as can skin infections requiring antibiotic treatment. If your dog presents any of these symptoms, take it to the vet.

Your dog should be on a continuous flea treatment program. Products are available that both prevent the fleas from reproducing, as well as from biting. They are administered orally or topically once a month. Flea collars, powders and shampoos are also available.

The most common deadly spiders in Australia are red-backs and funnel-webs.

Unfortunately, very little is known about spider bites in dogs. This is largely because it is hard to prove that a dog has been bitten by a spider, Wimpole says. Furthermore, finding out exactly what type of spider it was is equally difficult.

Bites by red-backs cause intense pain and swelling, and the venom can cause vomiting and diarrhoea, poor co-ordination and weakness, which can develop into paralysis.

Bites by funnel-webs (common to the greater Sydney area) cause short-term high blood pressure and rapid heart rate, but little else is known. Wimpole says the effects are likely to be less severe than in humans. In general, spider bites can cause extreme pain in the area of the bite, muscle tremors, rigid muscles, paralysis and possibly death. If you suspect your dog has been bitten by a spider, try to keep it calm and get it to a vet immediately.

Mosquitoes are blood-sucking insects that transmit diseases. There are more than 300 different species in Australia, however, only a small number of these are of concern.

Mosquito bites are possibly the most common insect bite to pets, and in themselves, the actual bites are not a problem. Heartworm, however, is carried by mosquitoes and is deadly.

When bitten and infected, the immature heartworms migrate towards the heart, where they live and grow, eventually causing heart disease. An adult worm can be as long as 15cm and blocks up the heart valves and arteries that lead to the lungs. If left untreated, death can occur within a few months.

Symptoms include weight loss, coughing, decreased activity and, occasionally, sudden collapse. Luckily, heartworm is preventable with monthly treatments, such as a topical treatment applied to the back of the neck or annual injections.

Parvovirus is a viral infection, which depresses a dog’s immune system. The main source of the virus is the faeces of infected dogs. It is highly contagious and easily transmitted.

As with any viral disease, there is no specific treatment to kill the virus once it infects the dog. However, death is not caused directly by the virus, but rather as a result of the severe dehydration, electrolyte imbalances and infection in the bloodstream (septicaemia) that it causes.

Symptoms include severe vomiting and diarrhoea (which may contain blood), lack of appetite, depression and fever. Dogs usually become ill within seven to 10 days of the initial infection. Your dog should receive immediate veterinary attention and be quarantined from other dogs. Accurate diagnosis requires detection in the faeces or blood.

Treatment includes correcting dehydration and electrolyte imbalances with the administration of intravenous fluids – sometimes plasma or blood transfusions are given. Antibiotics and anti-inflammatory drugs are then given to prevent or control septicemia. Prevention is through vaccination, followed by subsequent booster vaccinations.

A well-stocked first-aid kit could save your dogs life, and Dr Justin Wimpole, veterinarian and author of First Aid For Dogs, recommends all dog owners have one. Your kit should include:

Veterinarian Dr Justin Wimpole says the first rule of dog first aid is: do no harm! This sounds obvious, but many owners will be unaware of the fact that things they think can help their dog will, in fact, do more harm than good.

Never put anything, such as Savlon or Dettol, on an insect bite. Similarly, dogs should never be given human medications, such as Panadol, aspirin, ibuprofen, anti-depressants or sedatives. If in doubt, don’t do anything at all.

For more information or first aid tips, please contact your veterinarian for advice.

One Response to Dangerous Bugs