Cushing's disease in dogs : signs, symptoms and what you can do 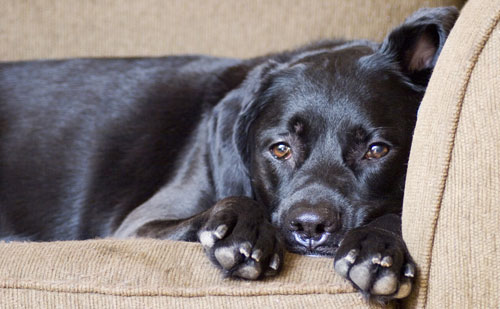 Cushing’s disease in dogs affects the adrenal glands and can be very serious, writes Laura Greaves.

When Louisa Forrest’s 12-year-old Beagle cross Jack Russell, Brutus, suddenly developed an unquenchable thirst last Christmas, she knew something was wrong. Always an active dog, Brutus was also becoming lethargic and gaining weight. “He just wanted to lay around the house all day despite having a huge yard and a cat and chickens to chase,” says Forrest, a Sydney-based naturopath.

“When he began to drink more than two litres of water a day, we started to think something wasn’t right.”

She took her beloved rescue dog to the vet for a check-up, where blood tests and urinalysis soon revealed the cause of Brutus’ woes: Cushing’s disease.

What is Cushing’s disease?

Also known as hyperadrenocorticism, Cushing’s disease is the excessive production by the adrenal glands of the naturally occurring steroid hormone cortisol.

While a small number of dogs have both ADH and PDH, generally around 85 per cent have PDH and 15 per cent have ADH. In around half of ADH cases, the tumours are benign.

Cushing’s disease in dogs can also develop as a result of excessive use of steroid medications. This is known as iatrogenic Cushing’s.

The disease is quite common in dogs and females are more likely to be affected, says Sarah Reay from Perth’s Bullsbrook and Midland Veterinary Hospitals.

“PDH Cushing’s has no gender bias in dogs, but up to 75 per cent of canine ADH cases are female. It tends to occur mainly in middle-aged to older animals,” she says.

However, many of these symptoms are also present in other serious conditions, so it’s essential that these are ruled out first. They include diabetes mellitus, kidney disease, liver disease, hypothyroidism and dermatitis caused by sex hormones in entire (not desexed) animals.

“Diagnosis can be relatively simple or quite complex. We recommend starting with a complete general health blood profile,” says Dr Reay. “Animals with Cushing’s will often have increased liver enzymes and high cholesterol. Secondary urinary tract infections are also quite common.”

Louisa Forrest says Brutus had shown some symptoms of Cushing’s disease for more than three years. “I had been diagnosed with non-Addison’s hypoadrenia myself, where my adrenal glands were so fatigued they started shutting down, so I knew a lot about adrenal dysfunction,” she says.

“I was scared about the potential effect on Brutus of the very expensive clinical treatments. We were looking at thousands of dollars of treatment and no guarantee it would help an old dog like Brute to have a better quality of life.”

Without appropriate treatment, Cushing’s is a progressive disease. The prognosis for untreated dogs is often poor, depending on the underlying cause of the disease.

The good news is that there are several treatment options available. In ADH cases, removal of the adrenal tumour may be an option. “This is major surgery and can be very risky as the adrenal glands are very close to the kidneys and caudal vena cava, a very important vein,” Dr Reay says. “If the tumour has infiltrated the vena cava, then surgery isn’t an option.”

Dr Reay says the most common and safest treatment for Cushing’s disease in dogs is a drug called Trilostane, which blocks the pituitary gland from stimulating the adrenal glands. This option is most effective in PDH cases.

Not all dogs respond well to drug treatment. Christine Kardashian’s 16-year-old Kelpie cross Miniature Fox Terrier, Poppy, experienced distressing side effects when prescribed the drug for her PDH Cushing’s in 2011.

“Poppy did not react well to Trilostane. She lost her appetite and was so lethargic that she wouldn’t move. We feared the worst,” says Kardashian, a public relations consultant from Sydney. “On our vet’s recommendation we slowly took her off the Trilostane and gave her other drugs to counteract the side effects, but these didn’t work either.”

Kardashian sought a second opinion and a different vet recommended Poppy have an injection of cortisone, a hormone released naturally by the adrenal glands in response to stress. It suppresses the immune system and reduces inflammation.

“After that cortisone shot, our Poppy started to slowly come back and things were returning to normal. After a month or so, all her hair grew back,” she says. “She is truly a miracle dog.”

Is there an alternative?

More and more dog owners are seeking natural ways to treat illnesses and maintain their pet’s health. When her dog, Brutus, was diagnosed with Cushing’s disease, Louisa Forrest chose not to use orthodox veterinary medication.

“As I am a studying naturopath and author on home remedy use, I knew I could get my hands on what was required for Brutus to maintain health,” she explains. “We do not use medication at home for ourselves, so treatment for Brutus was naturally always going to be similar to how we treat ourselves.”

Brutus also takes fish oil and flaxseed oil, as well as glucosamine supplements for his arthritis.

“Dandelion is known to normalise adrenal gland function in dogs. Stinging nettle is an overall health tonic for humans and dogs, with tonnes of vitamins and minerals,” she says.

But is it safe to treat Cushing’s disease in dogs with natural remedies? Dr Reay advises extreme caution, as there is no scientific data supporting the efficacy of these treatments. Consulting a holistic veterinarian is advised.

While dogs with Cushing’s disease produce too much cortisol, the related Addison’s disease occurs in dogs whose adrenal glands produce too little cortisol.