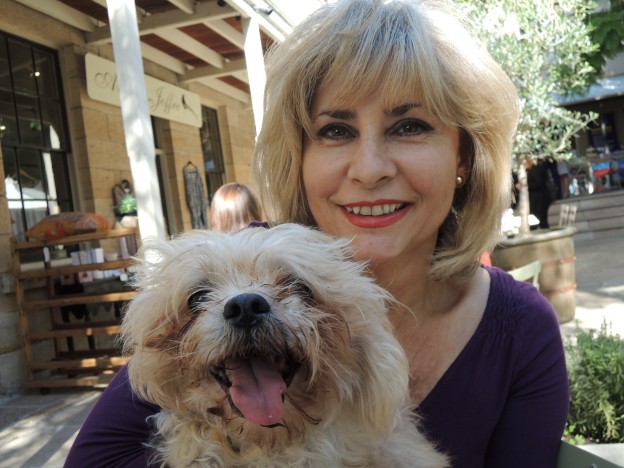 When you look at Wally, it’s hard to imagine this 10-year-old Shih-Tzu cross Poodle was paralysed four months before with Coonhound paralysis. Today, he is full of beans, running around Sydney’s waterside suburb of Balmain as if to celebrate his new-found freedom.

In March last year, Wally was diagnosed with Acute Canine Idiopathic Polyneuropathy (ACIP). ACIP, known as Coonhound paralysis or polyradiculoneuritis, is a common cause of acute polyneuropathy; a serious, unpredictable and potentially life-threatening neurological disorder that occurs when nerves throughout the body malfunction simultaneously. Coonhound paralysis cannot be prevented because the cause isn’t yet known. However, the good news is that recovery is possible. But, as Wally’s owner Shirley Bond explains, it’s not easy.

She and her husband Robert Brandscheid worked around the clock for several weeks to help Wally recover. Bond says the diagnosis turned their lives upside down, but Wally is like a child to them and they’ll do everything they can to help him. Bond found Wally in a shelter on death row eight years ago, and he had been in and out of foster homes all his young life. “I went to the shelter looking for another kind of dog and when I picked him up, he cuddled into my neck and I was a gonner,” she says. “He’s such a loving, affectionate little boy, most delightful, cheeky and intelligent.”

Wally had the opportunity to travel across the world, living in Hong Kong and France, dining on steaks at some of the finest restaurants.“We had wonderful experiences with Wally and then to see him paralysed was a big shock to us,” says Bond. What they thought was arthritis set in and Wally’s back legs started to stumble. “When he fell back and peed on himself, we thought it was tick paralysis and raced him to the vet.”

Wally was initially misdiagnosed with a slipped disc. However, through the process of elimination with testing, Wally was finally diagnosed by Dr Georgina Child, a neurologist at Sydney Animal Specialist Hospital and lecturer at the University of Sydney, who has a lot of experience with Coonhound paralysis cases. Dr Child explains that Coonhound paralysis is more common than people think and affects dogs of all breeds, ages and genders. (A similar acute polyneuropathy can also be seen in feline of all breeds and ages, although it is rarer compared to dogs.) In fact, she sees two or more cases in dogs every month.

What is Coonhound paralysis?

“So called Coonhound paralysis is the most common acute polyneuropathy followed by tick paralysis,” Dr Child says. “It is similar to Guillain–Barre syndrome in humans and involves acute inflammation of multiple nerve roots and peripheral nerves. The spinal nerves are most severely affected.” A diagnosis is made based on clinical signs and ruling everything else out. There is no specific treatment — just a huge dose of tender loving nursing care, she adds.

Because Coonhound paralysis is an acute condition, symptoms often appear suddenly. Initially, a dog will show signs of weakness of the hindquarters and change of voice or loss of bark. Coonhound paralysis progresses over several days and can lead to total paralysis of all four limbs. The disease progresses to a loss of muscle tone, and eventually muscle wasting.

The cause of Coonhound disease is unknown but it is presumed to be immune-mediated, according to Dr Child. Recurrence is also uncommon, but can happen. “In the United States, Coonhound paralysis can be caused by exposure to racoon saliva. But in Australia, we don’t have any racoons, so we don’t know if it is related to anything in particular or one of many things. It has been seen after vaccination and in humans can follow a viral or gastro infection,” she says.

Australia appears to have a higher incidence of Coonhound disease than the US, says Dr Child. In America, it may be that the disease is picked up by primary and secondary (specialist) institutions. This means that the incidence of cases is low by the time university researchers who are collecting data (tertiary institutions) are assessing incidence. “Maybe it is a perceived higher incidence in Australia. Or we really do have an increased incidence because we’re missing something else like an unknown toxicity or we do something differently here than elsewhere” she says.

Links between diet and Coonhound disease

One of the things we do here is feed our dogs differently. “We feed more raw meat than anywhere else in the world. Almost all the dogs I’ve seen with Coonhound paralysis eat raw chicken,” says Dr Child. “The link has previously been made with Campylobacter jejuni bacteria, which causes gastro upset (diarrhea, abdominal pain, fever etc) in people.

The theory is that some antigen associated with the cell wall of this bacteria stimulates the immune system that then turns on the nerves. Campylobacter jejuni is a common contaminant of raw chicken. This theory is not proven and there is currently no research exploring the idea.

In the US, no link has been found in dogs with coonhound paralysis and campylobacter exposure, but dogs in North America are generally not fed raw chicken.

What we do know is that regardless of if the disease is diagnosed in its early stages, there’s nothing a vet can do to stop the progression of the disease, according to Dr Child. Also, the severity of the weakness or paralysis that develops varies in individual dogs. Dogs with Coonhound paralysis continue to feel physical sensations, including pain, and almost always continue to drink, eat, defecate/urinate and even wag their tails.

“I’ve seen dogs as young as 10 weeks of age and as old as 16 with Coonhound paralysis,” says Dr Child. “Recovery time for a dog is between three weeks and more than three months. Less than five per cent will develop ventilatory failure and require ventilation. A very small percentage sadly has to be euthanised due to complications that may develop.”

Wally’s owners were relieved to learn that their beloved pooch was going to get better with time and big doses of TLC. Wally needed around-the-clock care and being a retired art teacher now drawing dog portraits from home, Bond was able to give Wally the care he needed. “We had to carry Wally out and walk him in a squat position — my back was giving in,” she says. “He wasn’t interested in sniffing anything. I think he had depression. He was so frustrated.”

But they didn’t give up, pushing Wally a little bit further every day. “All we wanted to do is make Wally’s life as normal as possible,” she says. “I carried him around with me in a large bag. He seemed happier.” At home, Wally did hydrotherapy daily, three times a day, for ten minutes, walking back and forth in the bath. “You could actually see his legs paddling two weeks into the paralysis. It was so heartening to see that,” says Bond. Wally also went to acupuncture treatments, which helped with toileting and anxiety.

“Toileting was the biggest problem. He was incredibly fussy where he went. We took him out every two hours day and night. He was scared and trembling all the time. We couldn’t go anywhere with dogs. We knew this was going to be a nightmare because he wouldn’t even go in his own postcode!” she giggled, recalling a midnight incident with the Balmain police. At that time, there had been burglaries in the area and one late night, Bond and her husband were bent over at the park coaxing Wally to do his business. Suddenly, they were blinded by the flashlight of police officers and had to explain why they were there.

“It happened again the next night and again three days later with female detectives in an unmarked car,” says Bond. “We told them, we are the ‘poo’ers and ‘wee’ers and they said ‘oh yeah, we heard about you’! So we became famous in the area.” Fortunately, acupuncture helped to relax Wally. Bond says because there’s no drug treatment for Coonhound disease, some people wait it out and don’t do anything, but it takes  much longer to recover. “We were constantly moving Wally’s little legs, doing extensions and exercises,” she says. “Then we heard about the benefits of physiotherapy. We tried it and it helped!”

Physiotherapy a key to recovery

Wally’s physiotherapist Dr Helen Nicholson at the Animal Referral Hospital in Sydney says Wally was completely paralysed — “flat, stuck to the ground” — when she first saw him. “Wally had head movement but only a flicker of movement in the legs. With Coonhound paralysis, it’s all about learning to move again,” says Dr Nicholson. “All the research shows that if you do all the limb movements for them, the patients don’t learn as effectively and don’t recover as fast and maintain their improvements as long.” The best way to teach dogs to learn to move again, she says, is to get them motivated. Give them a problem to solve.

“The problem we use is how to reach for the food. The motivation is that you like that food,” Dr Nicholson explains. “When you bring the food up in front of them, they want to pull their head up and eventually it helps to bring them in a sitting position. You need to give them as much help as they need so they can achieve some success and not become frustrated.” These exercises need to be done at home several times a day to speed up recovery, continues Dr Nicholson. Other physio treatments that help are massage for dogs that are stiff and need stretching, and sensory integration activities, such as vibration of the skin to help the body improve sensory awareness.

“We use an electric toothbrush on the skin and the sensation helps the brain realise the body is vibrating,” she says. “We target individual toes and tendons. You can’t move your toe if you don’t know where it is. We are also increasing the resting tone of the muscles and getting the tendons primed and ready for action, so the muscles have a better chance of helping.”

Sometimes dogs also benefit from electrotherapy if they have pain associated with pressure sores from not lying with their legs in a normal position for a long period of time, for instance. You need to roll your dog regularly, says Dr Nicholson.

“When dogs recover, some look good as new while others never get back to 100 per cent — they just manage a stroll in the park. But there’s no doubt physiotherapy helps to give quality of life back,” she says. Looking back at the four months of slow but gradual recovery, Bond says she is amazed at Wally’s strength and will to recover. He kept wagging his tail, no matter how frustrated he got. “One time it was midway though week four of Wally’s paralysis and hubby nuzzled him and Wally put his paw up and patted his face. That just knocked us sideways,” says Bond. They saved Wally once and they weren’t going to give up on him now.