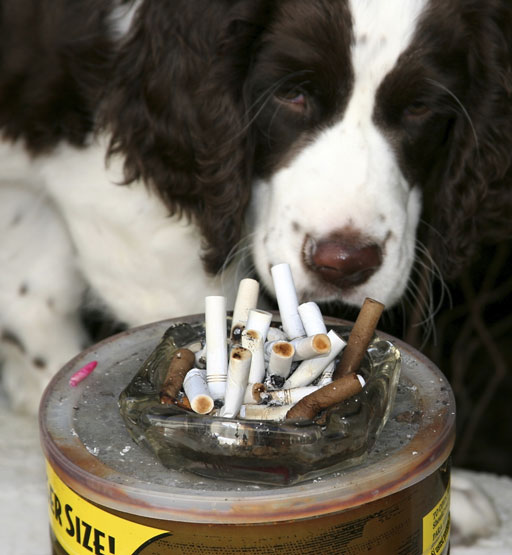 People have been hounded for years about the health risks of cigarette smoking, and veterinary studies today reveal our pets are in danger, too. Katie Cincotta speaks to experts about the hard facts.

Medical science and anti-cancer groups have been hounding us for decades about the ills of smoking. Now, research is also proving that second-hand cigarette smoke can harm our pets.

According to university studies, second-hand smoke (also known as environmental tobacco smoke or ETS) is placing pets at greater risk of developing cancer. Several studies have confirmed the link between nasal, sinus, lung and mouth cancer in pet dogs and cats exposed to tobacco smoke.

It might be hard for smokers to believe that simply being around smoke could have such disastrous health consequences for their companion animals, but Quit Victorias acting director, Suzie Stillman, says the negative effects of passive smoking aren’t in dispute. The impact of smoke exposure on human beings is becoming more evident. Youve got 4000 chemicals in cigarette smoke, and we know that more than 50 of these are known to cause cancer, including arsenic, cyanide and formaldehyde, Stillman says.

While your dog might not be puffing on the cigarette itself, only 15 per cent of cigarette smoke is actually inhaled by the smoker the rest of it wafts into the air, exposing anyone in the vicinity to thousands of harmful toxins and carcinogens. The evidence is increasingly showing that the health effects of second-hand smoke are significant for lung cancer and heart disease. Its a real concern, Quit Victorias spokesperson says.

Stillman says mounting evidence against second-hand smoke is equally relevant to animals. We would expect creatures that have the same sort of body make-up to be affected in the same way as humans, she says.

Professor John Reif of Colorado State Universitys Veterinary Teaching Hospital in the United States pioneered research in the 1990s that showed a correlation between second-hand smoke and cancer in pets. His studies were the first of their kind and revealed a higher incidence of nasal-cavity tumours in dogs exposed to cigarette smoke with long-nosed breeds, such as Collies, specifically at risk.

In a second study in 1998, Reif found short-nosed dogs in smoking households were more at risk of lung cancer in fact, they had a 60 per cent greater risk than dogs from non-smoking households. One possible explanation for the higher lung-cancer rates in short-nosed dogs, like Bulldogs, is that their shorter nasal passages might be less effective at filtering out carcinogens before they reach the lungs.

As published in the American Journal of Epidemiology, Reifs research was the first scientific proof that dogs can also suffer cancer risks from cigarette smoke. “Both studies are important because they show exposure to second-hand smoke has an increased risk for cancer of respiratory systems in dogs,” Professor Reif says.

Other recent studies have also established a smoking and cancer link in cats. A Tufts School of Veterinary Medicine study in 2002 in the US found a strong link between cats living with smokers and a mouth cancer called squamous cell carcinoma. Those cats exposed to smoke for longer than five years displayed even higher rates of the oral cancer. The researchers surmised that because cats groom themselves diligently, they could be licking up carcinogens on their fur, exposing the delicate mouth area to the hazardous chemicals.

For owners who smoke and might be concerned about their pets health, Professor Reif says some of the warning signs of lung cancer in dogs include chronic coughing, weight loss and abnormal fatigue. For nasal cancer, owners should look out for swelling over the nose or sinus area, excessive sneezing and a bloody nasal discharge.

His message is simple for preventing cancers in any domestic animal simply don’t smoke around your pet.

Dr Rod Straw, a veterinary surgical oncologist who runs Animal Cancer Care at the Brisbane Veterinary Specialist Centre in Queensland, was a professor at Americas Colorado State University when it conducted that groundbreaking research.

He says those studies, and his many years working with cancer-afflicted pets, confirm the cancer risks for dogs exposed to smoke. It all goes together without having to be a rocket scientist. You’re not just killing yourself, you’re killing your pets, Straw tells Dogs Life.

He says the majority of his patients with respiratory cancers, like primary lung tumours and intra-nasal cancer, have owners who are smokers. There is a smoking household link, and it is shocking to owners who were unaware of the risks, he says.

Straw says that while progression of cancer is much faster in dogs than humans, lung lobectomies to remove primary lung tumours give dogs a 50 per cent one-year survival rate.

For intra-nasal cancers, he says the treatment of choice is external beam radiation therapy, using his clinics new million-dollar, high-energy radiation facility the first in Australia for animals. Its a linear accelerator that converts electrical energy into radiation, so we specifically target the radiation to kill the cancer and preserve as much of the normal host tissue. Its done in small daily fractions, with a short general anaesthetic, Straw tells Dogs Life.

Straw may have been the countrys only oncologist back in 1995, but he now shares the field with seven other oncologist veterinarians around the nation. With cancer now the leading cause of death in pet dogs, killing 40 per cent over the age of seven, such specialist treatment is a welcome support base.

On an anti-smoking web forum, one pet owner shares the story of her beloved dog Sydney succumbing to lymphoma cancer which she blames on her smoking.

When she was 14, she started sneezing blood and losing weight – it was lymphoma. I blamed our smoking, even though for the last five years of her life we did not smoke in the house. She was almost 15 years old and had a pretty good life up until then. I cannot help but wonder how old she could have gotten if we had not subjected her to our smoking, writes Sharon, who has now quit smoking for her new puppy, Ellie.

Another pet owner tells Colorado State University that their evidence about second-hand smoke has her worried. As a smoker, shes asked her vet to look for signs of health issues in her five-year-old Hound cross, who suffers sporadic wheezing, coughing and hyperventilating around cigarette smoke. “I am close with my dog. I would never forgive myself if I caused his early demise,” Sarah tells the universitys newspaper.

Most vets and pet professionals agree that we need more research on the negative health impacts of smoking around pets. But the anti-smoking lobby isnt sitting on the fence. Quit Victoria is encouraging all pet owners to take simple measures to protect their pets from smoke-induced illness.

Were encouraging smokers to not expose children or pets who aren’t in a position to make their own decisions, especially in a confined space like a car, Stillman says. The basic guideline is to make your entire home and your car smoke-free. That’s the best way to protect your pets. Try and allow your dog and cat to live as long and healthy a life as possible.

Quit Victorias chief says that with such overwhelming evidence that smoking can be harmful to pets, this could be the incentive that many smokers need to finally give up. If youve ever thought about quitting smoking, now is a great time. Do it for your pets, Stillman says.

Unfortunately, in the past, dogs have been used by tobacco companies in barbaric laboratory experiments to test the health impacts of cigarette smoking.

Dogs Life got its paws on the full medical report – “A review of chronic animal inhalation studies with mainstream cigarette smoke” – published by Informa Healthcare, which reveals one ghastly experiment that occurred in 1970.

The article reports 89 Beagles endured long-term cigarette smoke via tracheostomy and nasal masks, so the tobacco company could prove that cigarette filters reduced the incidence of pulmonary fibrosis and emphysema.

The dog experiment by the Lorillard Tobacco Company killed 30 per cent of the dogs during the course of exposure. The principal causes of death were all lung-related illnesses, including bronchial tumours, emphysema and pneumonia. To find out more on this article, visit www.informaworld.com

Dog of a ban

Not everybody is happy with new indoor smoking laws that have swept the world. One dog is having trouble giving up the addictive haze, since the smoking ban hit Britains pubs, as The Daily Mirror reported on 6 July, 2007.

Archie, a Collie whos been hanging out at the smoky pub since he was a puppy, is suffering withdrawal symptoms. His owners, Sarah and John Taylor (both smokers), say hes been snappy and restless since the pub has cleared the air: “The locals have been joking that we’ll have to get him a nicotine patch to wear, but I think a type of nicotine dog biscuit would be better.”