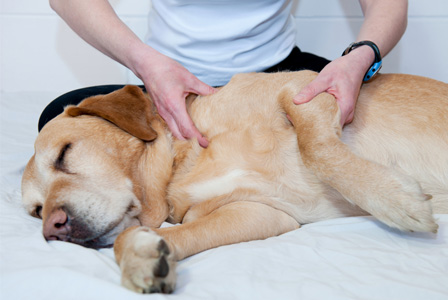 When changes to the spine interfere with the normal functioning of the body, chiropractic care for dogs can be beneficial. Sue Moses discovers how this gentle manipulation of the body can achieve great results in a variety of conditions.

You notice your dog is starting to repetitively lick a spot on its foot, leg or body. Soon it becomes an obsession and after a period of time, the area is raw.

Is the sore caused by a skin infection or parasite? Maybe neither there is a strong possibility a spinal problem is behind this trouble, called a lick granuloma. Chiropractic treatment is known to deliver amazing results for this problem.

Victorian veterinarian and qualified veterinary chiropractor Dr Melanie Quick told Dogs Life she is still constantly astounded by the results of the technique after obtaining her chiropractic qualification four years ago.

Like granulomas, for example, were one of the mysteries of the veterinary profession. However, it is among conditions that can be treated with chiropractic care, she said.

The condition is triggered when the spine is prevented from moving within its normal range. Small spinal joints begin to swell, putting pressure on the nerves. The related muscles deteriorate and a sensation of pins and needles then occurs on the skin. The dog is bothered by this and licks the area incessantly, causing a sore to develop.

By returning mobility to the spine, the swelling in the joint subsides, the nerve pressure reduces and the sensation ceases, she Quick explained.

Quick said that as a veterinarian she had been skeptical about chiropractic care as a form of treatment for animals.

Working predominately as a racehorse vet at the time, there were plenty of unqualified people claiming to be chiropractors, and I was seeing some limited long-term results. But I was curious, she admitted.

Quick returned to study and obtained a graduate diploma in animal chiropractic from RMIT University in Melbourne. It wasnt long before she was experiencing some freaky results treating horses and small animals. I believe I am a far superior vet for having this additional knowledge and qualification, she said.

A dogs spine is made up of 27 vertebrae and 36 pairs of nerves, which run though small gaps between the vertebrae. These nerves relay messages to the brain and in turn to every part of the body muscles, organs and even the skin.

If there is an abnormal movement of one or more joint in the spinal column, referred to by chiropractors as a subluxation, nerve messages become impaired and parts of the body fail to function normally.

Subluxations can also occur in other joints throughout the body there are more than 100.

For example, incontinence is another condition often successfully treated with chiropractic. The nerves from the sacral pelvic area of the spine send messages to the bladder, so if there is a subluxation in this area, the bladder can become impaired, causing incontinence.

In 80 per cent of cases, the body will self-heal, but in some instances it shuts down and forgets how to do this, Quick said. This stimulation puts the body back onto a pathway of healing.

Quick said she treats dogs using chiropractic for a range of conditions.

Chiropractors commonly treat dogs that have encountered accidents, such as being hit by a car, falling off the back of a ute or colliding with another dog while playing, she explained. Once the acute phase of the injury has passed, one or a number of treatments may be necessary and, in some instances, ongoing treatment may be beneficial.

X-ray is not usually necessary to diagnose a spinal subluxation, as these are easily detected by palpating (feeling) the spine and testing the ability of each joint to move. Problem areas don’t move easily. Instead, these areas of the spine feel like a box of concrete, Quick said.

For arthritic conditions, whether genetic or the result of a long-term untreated spinal or joint condition, chiropractic can also be useful. It is well worth a try and can be combined with other medical treatments, such as anti-inflammatory medication, Quick said.

Among Quicks successes is the story of Golden Retriever, Moby, who went for an examination due to chronic forelimb lameness. Elbow surgery had been suggested as a course of treatment.

I found the dog had a severely restricted neck, Quick said, and after two treatments his owners reported he was playing like a pup for the first time in his life. The surgery was cancelled.

Moby’s owner, Sussie Aprikidis, likened Quick to a miracle worker. Aprikidis said Moby was three when she took him to Quick for the first consultation.

Other than the lameness, we had always thought Moby was timid and antisocial by nature, because he didn’t want anything to do with other dogs, she told Dogs Life.

But this all changed after the chiropractic treatment. Within a couple of weeks, he started enjoying playing with other dogs and running around in the park like a puppy, Aprikidis said. Mel [Quick] told us at the time that Moby had very weak muscles in his shoulders and front part of his body because they had never been able to develop. I want everyone to know about chiropractic for animals because it has completely transformed Moby now he runs around like a dog should.

Moby continues to have annual chiropractic check-ups and enjoys a fun and active life.

Suspected spinal and joint subluxations can even lead to the condition in the first place, when the dogs normal mechanism or movement has become changed, placing pressure on the joints and ligaments.

This dog had been lame for eight months following the surgery and presented with a roach (upwardly curved) back and stiff hind legs, she said. This was one of my first canine chiropractic patients, and after two treatments the roach back and leg stiffness were gone and the whole posture of the dog changed. This result was very profound and the owners were delighted.

Dogs Life contacted Max’s owner, Jean Feiss, who had not considered chiropractic treatment for her dog until it was suggested to her.

It had never dawned on me to explore this option, even though Dr Quick had been treating our horses using chiropractic, Feiss said. When Dr Quick began treating Max, we saw results just about straight away, and then there was gradual but steady improvement. We saw enough results after the first treatment to continue on with it.

Max was a champion show dog before his health problems. He isn’t a show dog anymore, but he is a normal dog again, after months of not being able to use his back legs properly and walking around with a stiff roach back, Feiss said. Once he started using his back legs again, his back improved.

Funnily enough, Max loved the treatment, continued Feiss. Dr Quick would start at his neck and shoulders and work her way along his back and to his hind legs, and he just lapped up the attention and it didn’t seem to cause him any discomfort. He also enjoyed the stretching exercises we had to do with him. Now he is healthy and happy again.

Chiropractic helps heal various conditions, but that’s not all your dog needs.

Quick advises her clients that careful care in conjunction with chiropractic following surgery or a major trauma, such as a car accident, is required to achieve good results.

Once a dog is feeling better, it wont understand the need to take it easy, so controlled lead exercise for four to six weeks may be necessary, she stressed. The muscles need to recover and strengthen, and chiropractors will commonly send the client home with a strengthening and stretching program for their dog. It can be well worth the effort.

For more information on how chiropractic care may help your dog, speak to your vet or visit the Australian Veterinary Chiropractic Association at www.chirovet.com.au to find a qualified veterinary chiropractic practitioner in your area.

One Response to Chiropractic Care for dogs