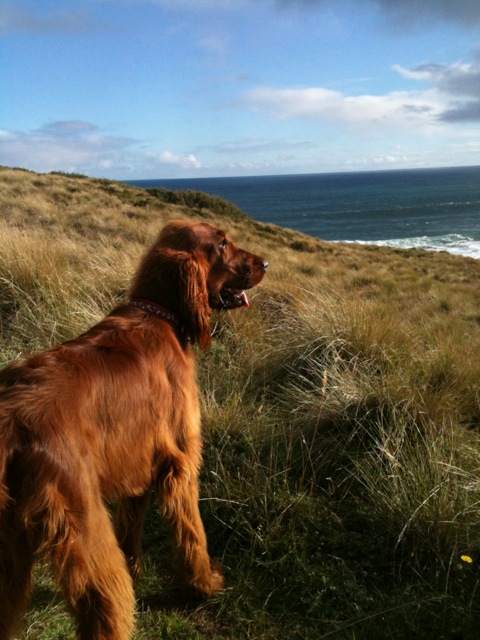 Watching your dog suffer an epileptic seizure can be a terribly traumatic event. Tim Falk discovers how epilepsy affects our four-legged friends and examines what can be done to manage the condition.

When Katarina Behan was woken at 5am one morning by the sound of loud banging, she thought there was an intruder in her house. “I shook my husband awake and we sat there for a moment listening to this noise that was so loud it felt like it was shaking the whole house,” Behan says. Then they realised the noise was coming from the laundry where their five-month-old Irish Setter pup, Ben, was sleeping.

“My husband jumped out of bed and rushed to the laundry. I stayed in bed waiting for the noise to stop but it didn’t and all I could hear was this banging and my husband calling Ben’s name over and over again. I knew something was seriously wrong but I was not prepared for what I was about to see: my beloved puppy was on the floor in a pool of his own froth and urine, shaking violently. Ben was having the first of many grand mal seizures.”

Ben was diagnosed with epilepsy after that terrifying morning. In the general dog population, somewhere between 0.5 and 5.7 per cent of canines are thought to have epilepsy. Dr Fleur James from the College of Veterinary Medicine at Murdoch University says epilepsy can be divided into two categories: primary or idiopathic epilepsy and secondary or acquired epilepsy. “In cases of primary epilepsy, there is no cause identified and dogs usually have their first seizure between six months and five years of age. In cases of acquired epilepsy, there is an underlying cause of the seizures which may include meningitis, infections, brain tumours and stroke-type events, just to name a few,” Dr James says.

Certain breeds are also more prone to suffering from the condition, according to Dr Joe Daley from Ark Veterinary Hospital. “In breeds such as the Beagle, Dachshund, Collie, Schnauzer and Belgian Tervuren, genetic factors are either proven or highly suspected,” he says. “Other breeds with a high incidence of seizure disorders include the Boxer, Poodle and Golden Retriever.”

No matter whether you’re talking about dogs or humans, roughly the same proportion of the population suffers from epilepsy. Roughly 3.5 per cent of humans have epilepsy while in dogs, as mentioned, it has been estimated at between 0.5 and 5.7 per cent. Dr James also points out that there are other similarities between canine and human epilepsy. “Dogs may have altered behaviour just before the seizure,” she explains. “During the seizure, which often lasts for less than two minutes, dogs lose consciousness and fall onto their side. Their neck and limbs are initially stiff then their limbs often jerk and dogs may salivate, urinate and/or defecate.

“Following the seizure, dogs often have altered behaviour. They may vocalise, become very thirsty or hungry, pace and may even be blind. This period may last seconds or days but is usually only for 10 to 30 minutes. In between seizure events, dogs with primary epilepsy will be completely normal.”

For an owner, watching your pooch experience a seizure is incredibly traumatic. Irish Setter Ben would scream, violently shake, lose control of his bladder and bowel and froth at the mouth, often for a few minutes. But Katarina Behan says the phase after a seizure is the most stressful. “Ben was visually blind, scared and disorientated. Supervising Ben was traumatic as he was unresponsive and panicked and could seriously injure himself running into walls, windows or falling down stairs or even into traffic if he had had a seizure while we were out.” Over the next six months following his first grand mal seizure, Ben averaged a seizure at least once a week. Seizures could come at any time, day or night, and Behan and her husband lived in a constant state of vigilance.

After your dog has a seizure, it’s important to see your vet. “Contact your veterinarian as the treatment will depend on the type and severity of seizure,” Dr Daley says. “A full physical and neurological examination is necessary and blood testing is often performed. True epilepsy is diagnosed by ruling out all other causes through blood tests, imaging and other studies.”

Sadly there is no cure for epilepsy. Instead, treatment merely controls the condition. Initially there may be no other treatment than monitoring for further seizures but, depending on the severity and frequency of seizures and the breed of dog, treatment may involve medication. “The most common medication is a barbiturate such as phenobarbitone,” Dr Daley says. “Monitoring with blood tests is necessary and side effects of phenobarbitone include sedation and excessive thirst and appetite.”

Sadly, Irish Setter Ben’s epilepsy was never able to be brought under control. Ben went into “status epilepticus”, a life-threatening situation where the seizures occur one after the other without abatement. “In the end we had no choice but to put an end to the suffering for us all and we said goodbye to Ben just two weeks shy of his first birthday. He will live on in our hearts forever,” Behan says.

But she also has some wonderful advice for owners of dogs with epilepsy. “Try to allow your dog to lead a normal life, take each seizure as it comes, and enjoy the time between seizures,” she says. “Use your support networks and engage in activities that relax and rejuvenate you.” Behan never allowed the epilepsy to stop her from taking Ben for walks, letting him swim and letting him play with other dogs. The time between seizures was always fun and because of this, Ben’s life, even though short, was so enriched.

“Please do not think that a diagnosis of epilepsy is a death sentence,” Behan says. “Many dogs live long and happy lives on the correct medication and are seizure-free, sometimes even being able to decrease their medication dose or have the medication removed all together. It can just be a matter of sticking in there and not giving up hope.”

What should I do if my dog has a seizure?

“Try to stay calm,” Dr James says. “It is a stressful time but your dog won’t be aware of what is going on. They are unconscious even though their eyes are still open. If you think to, try to time how long the seizure lasts for as your vet will ask you this question, as well as how long it took to return to normal.

“The main thing to do is to make the environment around your dog safe during the seizure to avoid injury. This might include moving furniture away and placing a blanket on the ground. It is important to know that dogs don’t swallow their tongue during a seizure so do not try to clear the airway or you are likely to get bitten,” she says.

Your veterinarian is the best person to assess your dog following a seizure. They will assess your dog and make further recommendations regarding investigations and treatment options. If the seizure activity is lasting a long time, seek veterinary attention immediately.

Katarina Behan offers some helpful advice for anyone living with an epileptic dog: