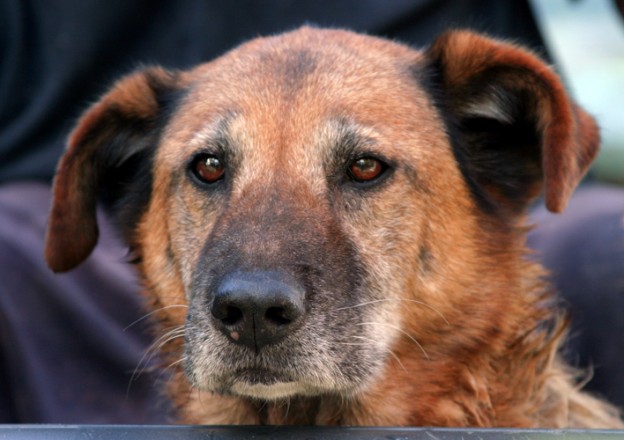 Various studies have found that up to 50 per cent of dogs older than 11 years show at least one sign of cognitive decline that leads to Canine Cognitive Dysfunction Syndrome. Rachel Belshaw investigates this common disease and finds out how we can help our ageing canines.

As many humans age, they develop a disease called Alzheimers. This debilitating condition causes odd behaviour and memory loss, lessening the patients quality of life. A similar disorder, called Canine Cognitive Dysfunction Syndrome (CCDS), occurs in many ageing dogs, and its victims suffer from similar symptoms.

According to veterinarian Dr Cameron Fay, the onset of CCDS in dogs cannot be stopped.

CCDS is not preventable, but maintaining a stimulating environment can delay the onset of the condition, he said.Fay also pointed out that there is no breed predilection in dogs diagnosed with CCDS, so it is important that owners be aware and alerted to its signs.

CCDS changes both the function and structure of dogs brains. This occurs through the death of nerve cells, the presence of beta amyloid proteins, degeneration of the myelin sheath that surrounds the nerve cells in the brain, decreased activity in neurotransmitters, and an increased activity of MOAB, an enzyme that breaks down dopamine.

In simpler terms, CCDS refers to a degenerative condition of the dogs brain. It leads to alterations in the level of awareness, decreased responsiveness to stimuli and deficits in learning and memory, Fay said. As dogs age, they are more likely to be diagnosed with the disease. It has been seen in dogs between seven and eight years of age, but is commonly found in older dogs.

How do you know if your dog has CCDS?

Dog owners play a major role in the diagnosis of a dog with CCDS. It is the behavioural changes that will draw attention to the fact that there is something wrong and, as the primary caregiver, the owner will find these behavioural changes obvious. If your dog is displaying any of the symptoms listed in the box alongside, it is important that you seek veterinary advice.

CCDS is diagnosed by ruling out medical and neurological conditions that would cause similar clinical signs, Fay explained.

Therefore, it is important to dismiss any other possible conditions that may be potentially life-threatening or cause your pet extreme discomfort.

Other common old-age diseases that present similar symptoms include renal hepatic disease, respiratory disease, cardiac disease, anaemia, hypertension, tumours, diabetes, hypothyroidism and chronic, painful conditions such as osteoarthritis and periodon’tal disease. Deafness and blindness are also common in older dogs. So, too, are problems that affect mobility, such as arthritis and degenerative joint disease, which present similar symptoms to CCDS.

Other medical conditions, not necessarily limited to older dogs, such as polyuria, incontinence, urinary tract infections and kidney disease, must also be ruled out before a CCDS diagnosis. All of these conditions create the impression of poor toilet-training, which is one of the main symptoms of CCDS.

CCDS, per se, does not decrease a dogs life expectancy, but some of the effects of the disease may reduce quality of life, prompting both owner and veterinarian to consider euthanasia, Fay said.

Some of the common symptoms of CCDS are not only debilitating to dogs, but can also become a problem for owners. For example, some diagnosed dogs have a tendency to bark incessantly for no apparen’t reason or pace around the house, either during the day or at night. This can become a real problem, with owners (and neighbours) losing sleep and concentration. Also, some dogs forget their toilet-training and may defecate or urinate inside the home.

Dogs diagnosed with CCDS often forget who their owners are and will shy away or act aggressively during normal, routine situations, such as grooming. It is not uncommon for dogs to walk away from being petted, greet owners less or stop initiating play.

A friend in need

By making a few simple lifestyle changes and with the aid of medication, you and your CCDS-affected pooch can, once again, share a harmonious life. An important thing for CCDS-diagnosed dog owners to provide is an enriching environment and lifestyle, which, as Fay explained, consists of packing in as much exercise, play, training and other daily routines as is practical.

Diet can also play a role in improving CCDS dogs dispositions. Antioxidant- and micronutrient-enriched seniors diets have been shown to improve memory, learning ability and signs of CCDS, Fay said.

This is backed by a recent study conducted by the National Institute on Aging in the United States. The study found that older Beagles who were fed a diet with plenty of fruit, vegetables and vitamins, who were exercised at least twice a week and who played with other dogs and a variety of toys, performed better on cognitive tests and were more likely to learn new tasks.

Fay also said that medication is an option for dogs diagnosed with CCDS, with promising results. A number of medications have been shown to increase bloodflow to the brain, protect nervous tissue and influence neurotransmitter function, he explained.

Although there is no cure for CCDS, drug treatments appear to prolong quality of life.

Summer has always been very fit, so as soon as things started to change, I knew something was wrong, Summers owner, Sandy Johnstone, told Dogs Life.

In October 2005, Summer started to display some odd behaviour. Her symptoms included becoming anxious, barking in the middle of the night and forgetting toilet-training. Summer has been blind for eight years and had learnt to negotiate her way around the house very well. Despite this, she began to bump into things and get confused.

When Summer first began to bark at nothing, Johnstone would immediately go to her and try to reassure her. However, this would only make the situation worse. I found that if I went to her too soon, if I didnt give her a chance to calm down, then it got worse. I now wait, and if the barking stops quickly, I just let her be. I only go to her if she keeps going. I found this very important, she said.

Johnstone took Summer to her veterinarian who, after detailed discussions over time, diagnosed Summer with CCDS. As her symptoms progressed, her vet recommended medication and began treatment of the drug propentofylline, which, at the time of print, Summer had been taking for two months.

After only 10 days, Johnstone noticed a marked improvement in Summers behaviour. The barking, loss of toilet-training and getting lost around the house have all improved. Since diagnosis, Johnstone has begun the process of slowly changing Summers diet.

This is an antioxidant- and micronutrient-enriched diet. It also has higher levels of omega-3s, increased fibre for gastrointestinal support, decreased protein, sodium and phosphorus for renal and cardiovascular support, Dr Cameron Fay explained.

As well as being excellent brain food, the new diet will also aid Summers arthritis.

Major changes to lifestyle have not been necessary, although Johnstone continues to exercise Summer as often as possible within her beloved poochs limits. She has also noticed her other dogs behaviour has changed around Summer, too, and now makes way for Summer when she passes by. Summer has plenty of support from her human and canine family.

According to veterinarian Dr Cameron Fay, common signs of CCDS are: