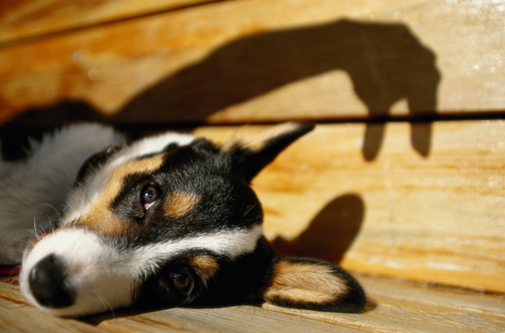 This article first appeared in the March/April 2006 issue of Dogs Life.

Fleas are universal and are probably the most problematic irritation to our pets. Michelle Minehan discovers how to eliminate these bloodsucking parasites that cause so much trouble to humans and pets alike.

Fleas are bloodsucking wingless parasitic insects that feed off the blood of animals and humans, said veterinarian Dr Mark Yee from Bexley Veterinary Clinic in Sydney.

They are infamous for causing the death of over 200 million people in the 14th century by spreading the bubonic plague from rodents to humans, he said.

Fleas are found worldwide and are now commonly associated with irritation from their bites. They rely on blood for nutrition, but they can go for months without feeding, explained Yee.

This means that while owners are not aware of it, fleas can lay dormant in their house for many months and only jump on the host when they are hungry. Subsequently, by the time the fleas are recognised, the problem has spread, resulting in many more fleas jumping around the house.

From the egg stage, the life cycle of a flea continues to larval and pupae stage before emerging from a cocoon as an adult, explained Yee. Depending on environmental conditions and food supplies, this can be as little as five weeks or can take several months.

Fleas must be treated

Wherever there are pets, there will be fleas. No country or region is free from them, but they can be more common in some areas.

Prolonged periods of warm, humid weather are the best for fleas to complete their life cycle, he said. But with central heating and the increase in household pets, they are now a year-round problem for pet owners.

Fleas can be very easy to recognise and it is vital to treat your pooch and house immediately to stop them from multiplying.

Fleas must be treated as they can cause serious skin infections, inflammation and allergies in dogs, he said. They can also transmit bacterial and parasitic disease to humans, such as tapeworm. This occurs when part of the tapeworms lifecycle develops in fleas and when a dog ingests an infected flea, mostly while grooming. The tapeworm then develops in the animals intestine. The most common way for this to occur is for babies or children to swallow fleas carrying the tapeworm, Yee explained. This can be prevented by teaching children the importance of washing their hands after handling a dog and by not putting their hands up to their face or mouth.

Fleas can be extremely irritating to dogs as they cause itching and scratching which, over time, can result in hair loss, inflammation and dry skin. This especially happens over the base of the tail and lower backline, where fleas like to congregate.

The bite of the flea itself is irritating and itchy to dogs and will result in a small red wheel, said Yee. This can then lead to intense itching and scratching in dogs that are allergic to flea saliva. The continual scratching of the flea bites will lead to secondary skin infection, redness and hair loss through ongoing skin trauma.

As with most diseases, prevention is better than cure when it comes to fleas. Without effective preventative measures, flea numbers will build up rapidly and continue to cause more and more grief to pets and their owners.

Treating flea bites sometimes requires veterinary attention to relieve the skin infection and allergic reaction, but using an effective flea control on your dog, and all the pets in your home, to break the life cycle is the best way to prevent the problem from recurring, said Yee.

Many different flea preventatives and treatments are available today on the market, ranging from monthly tablets to liquid drops that are applied to the skin.

These tend to be more effective in breaking the life cycle of fleas and are generally safer for the dog and the owner, said Yee. Other effective treatments include flea washes, collars and powders, although these are best used as one-off treatments as some of their contents can be harmful if not used correctly.

Yee recommends pet owners talk to their vet about which product best suits their dog, as some products will also prevent heartworm and treat for intestinal worms as well as the fleas.

Treating your home for fleas is just as important as treating your pooch; this is because fleas hatch many eggs around its environment, so although you have killed the fleas and eggs on your dog, the others will still hatch and the cycle will begin again immediately. Yee suggests the following to make your home flea-free:

Washing or changing your dogs bedding

Vacuuming the carpets and using “flea bombs” in rooms of the house thought to be heavily infested.

Preventing access for your dog to get under the house, which is a perfect environment for fleas to breed.

Using a professional pest controller in cases where continual reinfestation is occurring.

The saying prevention is better than the cure is very important in relation to fleas, because while many different treatments are available on the market, there is no cure and it looks like it may stay this while for many years to come.

Given that fleas are transient parasites and can feed off different animals, it is unlikely there will ever be a flea vaccine, said Yee. However, this is just my opinion and I am not sure if someone is trying to develop one or not.

The lifecycle of a flea

Egg stage: There are four stages in the flea lifecycle and the first is the egg stage. Believe it or not, this is the stage that can cause the most grief. In this stage, the microscopic white eggs are laid on the host and fall easily from the host onto the bedding or throughout the house. Depending on the environment where the egg has been laid, the time it takes to hatch will differ, although they generally hatch one to 10 days later. The flea eggs will not survive in a dry environment with less then 50 per cent humidity.

Larva stage: When the eggs finally do hatch, the flea is now a larva. This looks extremely similar to a worm although it is only about two millimetres long. It is white in colour and has many fine hairs coating it. At this stage, all it has is a small body and mouth. Although having no legs, they are still able to move around; they may move up to one metre and will generally head towards darker areas and spaces where there is organic matter. At this stage, the flea does not drink blood; instead, it feeds on dead skin cells, flea droppings and other smaller parasites lying around. Over the next five to 11 days, the flea moults and doubles in size; this once again depends on the temperature and humidity. In an outdoor environment the larvae will survive in a well-shaded moist area. Indoors they are most likely to survive in the carpet and bedding.

Pupae: The flea cocoon is approximately 5mm long and with the right stimuli, it will hatch within five to eight days. When the larva is mature, it makes a silken cocoon around itself and pupates. This is when the flea spins a white, silken cocoon for itself. The flea now stays in this stage from up to one to six months, depending again on the environment etc.

Adult: When the flea emerges from the cocoon, it begins the final cycle, the adult age. The flea can now suck blood from a host, mate and lay eggs. A single female flea can lay up to 50 eggs a day! The newly emerged adult flea is attracted to light and pets by their movement, temperature and exhaled carbon dioxide. When the flea jumps onto the pet, they immediately begin to feed. The female flea will begin to lay eggs only 48 hours after she commences feeding.