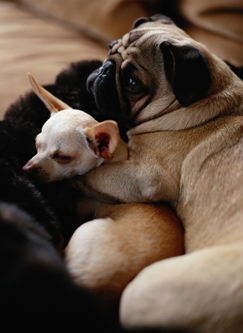 The colder months can be particularly trying for dogs with arthritis. Dogs Life Editor Laura Greaves reveals how to keep your canine companion cosy, comfortable and pain-free this winter.

Vets estimate that around one in five dogs has arthritis. With Australian Companion Animal Council research putting the nations pet dog population at 3.41 million, that’s as many as 682,000 four-legged friends feeling increasingly uncomfortable as the nights draw in and the mercury drops.While scientific trials have been unable to prove that weather conditions worsen arthritis, many human sufferers will attest that their pain is more intense during the colder months so it stands to reason that Rover is feeling rather sore and sorry, too.Anyone whos suffered from arthritis knows that their bones ache in the cold, says arthritis specialist Dr James Geddes from Sydneys Ku-Ring-Gai Veterinary Hospital. But, very often, people misconstrue arthritis as simply being old age and wont necessarily pick up on the fact that their dog is in pain.
What is arthritis?
Several types of arthritis can affect dogs. The most common is osteoarthritis also known as old-age or wear-and-tear arthritis which is often caused by overactivity. Other issues such as conformation, injuries, cruciate ruptures and genetics can also contribute.It is commonly seen in the hips, shoulders, elbows, knees and spine. These joints depend on a layer of cartilage acting as a cushion, which also provides a smooth surface, so the adjoining bones can move freely over each other. With arthritis, the cartilage deteriorates and movement of the bones becomes less smooth.Other factors also play a part. Some breeds, including German Shepherds and Retrievers, are genetically predisposed to arthritis and related conditions such as hip and elbow dysplasia, while obesity and rapid growth can also cause the condition to develop.Its well recognised that you need to somewhat control a dogs growth rate at a young age and in its formative years so it doesn’t grow too quickly (and) can build a strong skeleton, Dr Geddes explains.Dogs can also suffer from rheumatoid arthritis, an inflammatory disorder that can affect many tissues and organs but primarily attacks the joints. It is caused by internal disease, howe’ver its only one of a number of immune-mediated causes of arthritis where the immune system attacks joints. It can also be caused by infections.As with humans, senior dogs are more commonly diagnosed with arthritis than youngsters but young dogs can be affected too especially large breeds. Young dogs certainly can be affected by early-onset arthritis, either due to poor conformation (when stress is placed on a specific part of the skeleton during development) or an accident or illness, says Dr Geddes.As to why the painful symptoms of arthritis tend to be more acute in colder weather, he says one possibility is that the blood supply to the periphery of the body may not be as good, and therefore the bones are doing more work and are overloaded.
Does my dog have arthritis?
Signs that your dog may have arthritis include:-Favouring a limb-Difficulty sitting or standing-Sleeping more-Reluctance to jump, run or climb stairs-Weight gain-Decreased activity or less interest in play-Attitude or behaviour changes-Being less alert
Treatment options
While arthritis is not curable, the good news is there are many treatments available in both the orthodox veterinary medicine and natural health arenas (see box) that can help to ease dogs pain and discomfort.We can always help the dog, says Dr Geddes. Wed take a holistic approach to the diagnosis and the treatment of the condition in that wed start by talking about the dogs lifestyle and what modifications can be made there in terms of warm and comfortable housing.Keeping your dog warm is essential. If he usually sleeps outside, consider bringing him indoors in the winter months. If this is not possible, ensure his kennel is well insulated, kept dry and the entrance faces away from wind and rain.Whether your dog is an inside or an outside pet, provide a raised bed so that hes not forced to sleep on the cold floor. Kit him out in a durable dog coat when walking, especially for small, short-haired or elderly dogs. Dogs skin can dry out in the frigid winter air, but brushing the coat regularly helps to distribute the natural oils and prevent dry skin.Some arthritic dogs we see in the hospital come from homes with polished floors, so those dogs sometimes benefit from booties to provide increased traction, Dr Geddes explains. The biggest hurdle is often getting to their feet; once they’re on their feet they do better, so booties can be helpful in those cases.Keeping dogs nails trimmed also helps to maintain traction on slippery surfaces.There’s also a range of slings available that go around the pet so that owners who have a bad back or aren’t super-strong can help them, he says.For a more detailed version of this story please refer to page 14 of Dogs Life issue 107 (May/June 2011)