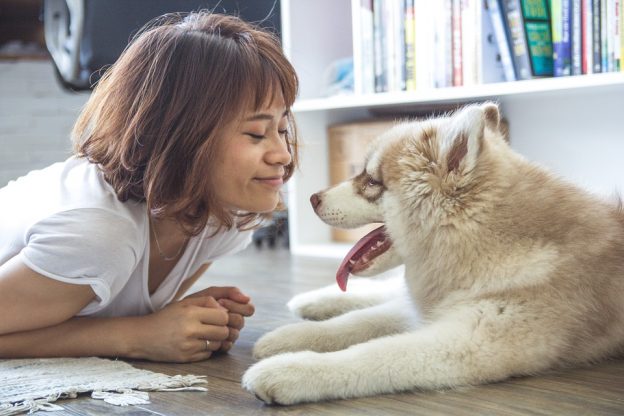 Animals that have been given up for adoption or abandoned are often fearful, anxious and distrusting. This can manifest in unwanted, often perceived aggressive and antisocial behaviours, which is why rehabilitation is paramount. Anastasia Casey investigates.

Adopting a pet from an animal shelter is truly one of the most rewarding experiences anyone can have. And having adopted all three of my furry friends, I know first-hand the extraordinary sense of satisfaction you feel knowing you’ve given a deserving animal a second chance. But often people are wary of adoption for fear that the animal may be too much “work” or untrainable due to its age and life circumstances. This is why rehabilitation is crucial, both for the animal’s health and mental state, as well as to ensure it’s successfully rehomed and integrated back into society.

“The first thing we do is desex all the animals that come into our care and have them worked over by a vet,” Denise Becus from Denise at PAWS, an animal rescue organisation based in NSW, says. “At that point, any medical treatments required are undertaken to bring the animal back to good health. Sometimes, other shelters send their animals to us as they are unable or cannot afford to provide the animal with the health care it requires.”

Sadly, many animals that have been abandoned or surrendered to the pound or shelter have been severely mistreated or simply ignored and not provided with the care and nourishment they require.

“I remember a debilitated, malnourished young German Shepherd that presented to me for a general health assessment after he was found in an abandoned warehouse,” veterinarian Dr James Crowley says. “The dog was of poor body condition, ribs protruding, prominent pelvic and spinal bones and had marked hair loss with mite infestation and secondary bacterial infection. I performed a comprehensive blood and urine profile, which was within normal limits. I treated the dog for the mite infestation and bacterial infection and recommended a high-quality commercial food diet. The dog’s skin condition cleared and he gained weight steadily to reach a healthy weight overtime.”

Typically, once the animal has been treated for any medical conditions and has been monitored and brought back to good health, behavioural training and psychosocial or mental rehabilitation begins. Denise, who has around 40 dogs placed in foster care at any one time, says most of the animals that come into her care come from puppy mills, the pound or were used for breeding. Often, the dogs, particularly those from puppy mills, have had very little or no human interaction or even proper socialisation with other canines whatsoever, which is why extensive behavioural training is required.

“Some dogs have never had any training before so we are starting from scratch,” Rosalie Horton, senior behaviourist at the Animal Welfare League NSW, says. “Some dogs have learnt behaviours that might be unwanted such as barking, being aggressive or fearful as a way of protecting themselves throughout life. All dogs are different due to their genetics, learning and their environment, and this means that they all require some sort of help ‘fitting in’, especially when it comes to meeting people and other dogs.”

Rosalie uses a technique called systematic desensitisation, a psychiatric treatment often used in humans to overcome fears and phobias, where the animal is taught to relax when faced with the fear-provoking stimuli. She combines this with positive-reinforcement training using treats and lots of praise to reward and encourage good behaviour.

Many rescue pets in need of extensive rehabilitation are placed in foster homes for a period of time before they are put up for adoption. Denise says all her foster carers are dog owners, which she believes is integral for proper socialisation of the dog with both humans and, of course, other canines. She also carefully matches her foster carers with the animal going into their care on a needs basis and to ensure the temperament of the carer’s existing dogs matches that of the rescued animal. “This process can take weeks to months and it’s important it isn’t rushed as the animal needs to be mentally sound and properly socialised before it is adopted out,” Denise says. “This minimises the chance of the animal returning to the shelter.” Denise explains that her carers use several techniques to rehabilitate the dogs, which range from mimicry, where the animal sees the behaviour of other dogs around him and learns from it, to positive-reinforecemnt training to encourage desired behaviours. “Most of all, though, what they really need is lots of love and affection as many unwanted behaviours such as aggression and anxiety are simply stemmed in fear,” she explains.

Once the animal displays marked signs of improvement in behaviour, it is put for adoption. But the training shouldn’t end there.

“We once had a dog that came into our shelter from our inspectors. The dog, Caesar, had been physically abused by his owners and was fearful of people, understandably,” Rosalie says. “It took a few weeks to build his trust and our breakthrough came when we went swimming at the lake together and something seemed to ‘click’ with him and he began to trust me and we started to play together. From there, he began to learn that people were great. It was a long journey and he was adopted eight years ago by owners who could continue his training. I get regular updates and Caesar has grown into an amazing adult dog. I feel sorry for the previous owners who missed out on this experience and so proud of him. It reminds me of just how resilient and amazing dogs are.”

Rehabilitation doesn’t begin and end at the shelter or with foster care. It’s crucial owners understand what’s involved with rescuing a pet and that socialisation and behavioural training is an ongoing process. This maximises the success of the rescue and reduces the chances of the animal going back to the shelter and re-entering the system. It also helps ensure harmonious living between both animal and owner, and a happy, healthy pet.

“I work with numerous rescue dogs, as do my colleagues, and what we most often see are dogs that are fearful, distrusting, anxious and misunderstood,” Chiara Perri from Point Cook Dog Training says. “It takes a special person to go into a shelter and bring a pet home. It requires dedication, patience and a gentle approach to training. Some of these dogs have been traumatised, so owners must avoid using punishment-based training methods, as they will only exacerbate the problems.”

Chiara recommends owners of rescue animals, and any pet in general, use force-free training methods with an emphasis on rewarding good behaviour.

Rosalie agrees and says, “Dogs will always work for praise and treats rather than to avoid punishment.” She recommends engaging in fun activities with your dog such as canine nose work as a way to exercise your pet, spend some quality time together and nurture their sensory abilities.

“With many adopted dogs, we do gradual socialisation, teaching the dogs how to cope around other dogs and people, as well as how to handle society and suburbia,” Chiara explains. The trainer utilises various methods depending on the animal’s circumstances and the behavioural and or mental problems with which it’s inflicted, whether it’s separation anxiety, fear of people and or other dogs or problems toileting.

“All this training can take months and even years as we have to slowly undo the damage of the past. New owners need to be prepared to take as long as needed and to work at the dog’s pace.”

With help from a qualified behavioural trainer, and the continual dedication of you as the owner, your rescue pet can recover from problem behaviours resulting from abuse, mistreatment, poor early socialisation and abandonment. I know first-hand the unconditional love and gratitude expressed by my rescue pets and there is no feeling in the world more heart-warming and rewarding. To give an animal a second chance at life is a true gift.

Ultimately, education is needed to reduce the stigma that rescued animals are “used goods” with aggressive and antisocial behavioural traits. Bad behaviours can be unlearned and replaced with positive behaviours. It takes dedication, perseverance and oftentimes the help of a professional.

“Set your dog up for success and try not to put too much pressure on them. Remember that dogs are dogs,” Rosalie says. “The greatest success is when you see a dog maintain their newly trained behaviours for the rest of their lives.”

In 2015-2016, the RSPCA alone received a total of 137,391 unwanted animals. This number increased by 7.24 per cent from the previous year, with statistics showing a steady increase since 2012. This doesn’t even take into account the number of animals given up to the countless other shelters Australia-wide. To help end the cycle of abandonment and the need to rehome, DOGSLife recommends adopting from a rescue shelter or acquiring your pet from a registered breeder and always desexing your pet to prevent unwanted litters. Also, never give a pet as a gift, unless it has been discussed with the recipient and their family at length beforehand and they are prepared and willing to care for the animal and provide for its needs for the duration of its life.

“One of my biggest training successes with an adopted dog was an owner with a young Border Collie,” Chiara Perri from Point Cook Dog Training says. “She was terrified of everything — movement, noise, people and dogs. When I first met her, she was a quivering mess, cowering, avoiding her new owner, avoiding everyone. She would urinate out of fear and submissively roll onto her belly hoping she was not going to get hurt. We began to build a relationship of trust between the dog and owner over a few months with simple training exercises at home. Once this was established, we got her to join group classes. We instructed all other dog owners to give her space and to avoid approaching her, as we wanted to teach the dog that strange people were OK. As the course progressed, we could see this dog blossom and by the end, she had her tail out, mouth open in a smile and her confidence had improved. Time went on and she returned months later for an advanced course and we could not believe the change in her, so much so that we then encouraged the owner to consider pet therapy as she had become so loving towards people. Twelve months later, this very same dog, the frightened and distrusting dog that we saw at the start, became a fully accredited therapy dog and began to work in hospitals and aged-care facilities.

“With time and patience and a very dedicated owner, this dog’s life turned around and we were so pleased to be a part of that journey.”