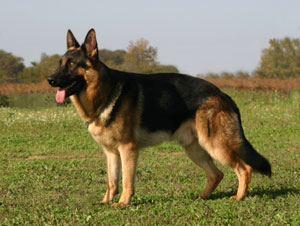 We find out some interesting German Shepherd facts, including the breed’s personality traits and interesting history.

Personality: Devoted and loyal to the core, the German Shepherd loves being part of the family and makes a wonderful companion.

Suitability: People who love spending time with their dog/s, and allow their dog/s inside the home as part of the family. The breed enjoys the company of children but like all breeds, they need to be supervised in the company of young children, especially considering their size.

Favourite Activities: The German Shepherd is great at many doggy sports and loves to have fun. Their favourite activity is spending time with their pack YOU! whether that be lying in front of the Tele, playing ball in the yard or running around the park. Whatever you are doing they want to do, too!

Watchdog Qualities: German Sheps make great guard dogs and have been used by many security organisations for this very reason. Due to their natural guarding instincts they are often used to protect property. They will certainly alert you to strangers and protect their loved ones.

Backyard Requirements: German Shepherds need regular mental and physical stimulation to stay happy. If left alone for long periods of time in a backyard they will become bored, destructive and noisy. Always leave plenty of dog-friendly chew toys or a large marrow bone at home when you are away, and practise good boredom busters (check out an issue of Dogs Life Magazine for more information on boredom.) They will live quite happily in a small to medium sized yard as long as they received the correct daily exercise.

With its noble look and natural athletic build, the German Shepherd Dog almost demands respect. Ask anyone in the company of this dignified breed and they’ll admit you cannot help but be impressed by this dogs remarkable presence.

While the German Shepherd Dog can sometimes intimidate with something as insignificant as a self-confident stare, a well-bred dog of sound temperament will prove to be not only the perfect companion, but the ideal working dog. In fact, this breed has been assisting man as far back as the 1800s when, as a working shepherd dog, it would herd sheep and keep stragglers from straying while the shepherd rested, knowing his sheep were in the best of hands.

Many people mistakenly believe the GSD was bred to be a guard dog. In fact, it was originally bred as a working/herding animal and belongs to the Working Group of dogs. Its this sort of work to which it is best suited and those who want a GSD for the sole purpose of standing sentinel outside to guard home and property are barking up the wrong tree. It is widely agreed that, as with all breeds, aggression in a GSD will be the result of poor breeding, bad or cruel handling and inappropriate or no training and socialisation. According to the experts, this breed craves human company and should not be left alone outside. Because of its herding instincts it needs to be part of a family which it can love and watch over, with supreme loyalty and dedication.

South Australian German Shepherd Dog breeder Andrew Hueppauff, first vice president of the German Shepherd Dog Club of South Australia, stresses this breed should not be bought simply to serve as a guard dog. Buy it to be part of the family, he emphasises. I have six pet GSDs, which are also our showing and breeding animals and they stay together in our yard. But when its cold outside they’re in the house with us. They are part of the family.

German Shepherd Dog breeder Lyn Gregor, whose dogs share her home on the New South Wales North Coast, agrees that this breed goes far beyond being a guard dog.

This dog is the perfect companion, she says. I have kept GSDs for about 20 years and have never known another breed that is more tuned in to people. This is a real dog and very much a people dog, completely in synch with its owner. They can read your moods.

In most states, it is now against the law to use German Shepherd Dogs for the sole purpose of guarding property. Thankfully, the days of GSDs and other guard dogs running up and down fences in the dead of night fulfilling their guarding duties are a thing of the past.

The one aspect most GSD experts agree on as possibly the breeds most popular attribute is its amazing versatility. While this dog can be the consummate playmate, its also able to do obedience, tracking and agility, as well as learn to be part of the police or lead blind people. Today, the breed is a prime player in detecting drugs and contraband, in search and rescue and in the military. As one GSD owner says, Throw anything in the way of this dog and it can do it. And in every domain it gets involved in, the German Shepherd Dog is revered for its intelligence, loyalty and courage.

But training must go hand in hand with this dogs incredible abilities, and breeders are unanimous that early obedience training is of the utmost importance in the development of all GSD pups. They have such a strong protective instinct that extensive socialisation at a young age will prevent over-protection in adult dogs.

Breeder Andrew Hueppauff recommends beginning socialisation as early as eight weeks and obedience work from 12 weeks of age. The important thing is how a dog is brought up, he says, and the way its treated at home. Start training your German Shepherd Dog as early as possible.

The GSD standard states the breed should be suitable as an all-round working, herding and service dog, but to fulfill these functions the dog needs to be of well-balanced temperament, steady of nerve, self-assured, absolutely free and easy and (unless provoked), completely good-natured as well as alert and tractable. All experts agree that early obedience training is the only way this breed can realise these goals. But while obedience training is imperative for the development of an acceptable temperament and socialisation skills, its also a stimulating and exciting pastime for this incredibly intelligent dog.

Peter Comatas is the publicity officer for the Victorian German Shepherd Dog Club and as liaison officer for the club, works closely with a number of service organisations. Peter is passionate about this breed and stresses the importance of providing German Shepherds with enough stimulation and exercise to satisfy their intelligence. He states emphatically that if you’re not prepared to provide this all-important aspect of a GSDs life, don’t buy one.

Peter also suggests that GSD owners consider entering their dogs in conformation and obedience competitions. GSDs enjoy physical exercise and their owners must be prepared to exercise them regularly, he states. A German Shepherd Dog is most happy when it has a task in life.

This breed is an excellent family dog and grows very attached to all members of the household. It is particularly good with children in the family. These dogs are easy to care for, needing a bath only once or twice a year so the oils in their skin are not depleted. Show dogs naturally need a bath before each show. Grooming can be limited to once a week but this breed does shed if its a problem, a quick brush once a day can reduce little hairs littering carpets and furniture.

German Shepherd Dogs can suffer from inherited problems which include hip and elbow dysplasia and haemophilia, so buying from a reputable breeder is paramount.

Puppies are generally not hip and elbow scored until 12 months of age so if buying a dog not yet one year old insist the pup is from hip- and elbow-scored parents. You should also ask to see a breed classification from your breeder.

The German Shepherd Dog League of New South Wales points out that the GSD has the largest number of canine registrations, reflecting the breeds popularity and usefulness. And although the GSD is used as a working dog in the army and other government services, the Leagues publicity manual says by far the largest numbers are owned by German Shepherd Dog enthusiasts as beloved family pets.

This has to be one of the most popular dogs around, she states.

And once you have owned one, they simply get into your blood. They are superb.

The GSD grew in popularity and was reportedly being imported into Australia as early as 1904. While still used as a working and herding dog in Germany, the German Shepherd Dog began to be used in police and military forces in that country and played a major role in the German army during World War I.

World War II saw the breed fall out of favour around the world but a few years after the war ended, the dogs popularity once again surged.

In 1972 the Australian government ended a 44-year ban on the importation of German Shepherd Dogs into the country and this pooch has since gone on to become possibly the most popular breed in Australia, fulfilling vital roles in police, security and military units as well as serving as a trusted companion in thousands of Australian homes.

Due to the availability of overseas bloodlines and therefore an increase in genetic material, the breed today is much improved.

Daily: The German Shepherd enjoys daily exercise and needs a balanced diet which includes vegetables and meat, raw meaty bones and fresh water. Always leave at least half an hour or more between meals and exercise. Remember not to over-exercise your young Shep, to prevent joint problems.

Weekly: A brush once a week, more often when shedding will help keep the coat in tip-top shape.

One Response to German Shepherd