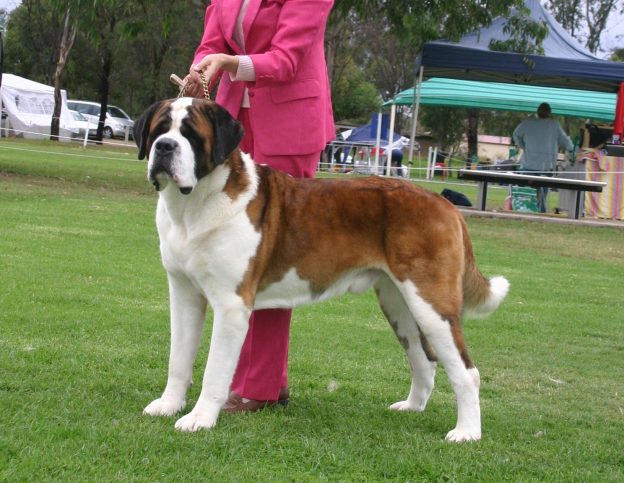 Switzerland’s national dog, the St Bernard, is just as happy trekking through the snowy Alps as he is curling up on the couch with his family.

An impressively muscular giant, the St Bernard is descended from alpine mastiffs first brought to Switzerland with the passing Roman army. The Bernadine monks from the Hospice Grand St Bernard, situated 8000 feet above sea level in the Swiss Alps, have used this breed since the 1660s for draught work and to find travellers lost and stranded on the mountains.

Since that time the St Bernard, as the breed has been known since 1865, has saved an estimated 2500 people. It is easy to see why this trustworthy, loyal and intelligent dog has become so popular throughout the world. Debbie Egglestone of the St Bernard Club of Victoria and St Bernard specialist judge has been breeding St Bernards for more than 25 years.

The St Bernard has a love for people and enjoys being included in family activities. He is not suited to someone who doesn’t enjoy spending time with their dog and will become destructive if left in the backyard to amuse himself.

“The St Bernard is well known for its suitability to people,” Egglestone says. “Saints were not only rescue dogs but also companion, watch and farm dogs. Saints were utilised in all aspects of farming work, cart pulling and family activities, and it is these functions that we see carried on in the Saint of today.”

The Saint is a true family dog that will bond to the family but is particularly fond of children, where children have taken the time to devote themselves to the dog, says Egglestone. “The Saint has quite a sense of humour and a love for children,” she says. Sometimes the Saint forgets his large size so young children should be supervised (as they should be around any dog).

The Saint has an easygoing nature but will defend his family and property if the need arises. “By purpose, part of the characteristics of the Saint is as a watchdog,” Egglestone says. “But by no means does this mean aggression. This is simply to advise his or her owner that someone is encroaching and to vocalise until the impending stranger has departed. The Saint will immediately give up that responsibility to the owner once the Saint is comfortable that no threat is imposed or that the owner is comfortable about the intrusion. Saints are well known for not taking any noticeable action, but quietly placing themselves between their owner and the perceived threat or danger.”

The Saint, with his eager-to-please attitude, is easy to train but positive reinforcement methods and plenty of praise must be used to achieve the desired results.

“As a giant breed, the Saint’s reaction/response time is not as fast as many agility breeds, however they are still easy to train and very receptive and responsive to friendly and direct training methods when given ongoing praise and encouragement,” Egglestone explains. “Their desire to please is the main reason Saints become so responsive and some have succeeded well in both endurance and agility in some states, though they are not as fast as many breeds.”

Being such a large dog, the Saint does require daily exercise but care must be taken in puppyhood and exercise should be limited for the first 15 months. “Particularly up to the age of approximately 12-15 months, the St Bernard puppy should be restricted in exercise as they need the time to develop muscle and ligament tissue — although bone development is fairly rapid right through this period,” Egglestone says. “Correct care of the Saint puppy and juvenile allows for exercise tolerance of bone development but with limited pressure/fatigue on underdeveloped areas. After that time, Saints can have their exercise increased and are tolerant of considerable exercise, providing it is gradually increased.”

If you don’t mind sharing your house with such a large dog and watching television from the corner of the couch (the dog will take up the rest), the St Bernard may be the breed for you. However, guardians must be prepared to vacuum the house on a regular basis and perform regular grooming as Saints shed their coat throughout the year.

“There are two different coat types — the long-coat (rough) and short-coat (smooth),” Egglestone says. “Each will shed coat throughout a normal 12-month period, with bitches also losing coat throughout their seasonal changes, possibly more so than other dogs. The long-coat Saint requires regular grooming with slicker brush and comb to ensure matting does not occur, particularly in the longer coat area of the feathering in the rump and behind the ears.”

Eggelstone recommends a weekly brush for all coat types. “The short coat is relatively easily maintained and is quicker to groom, with less density and no matting, and easier in wet times as a towel usually dries off the dog fairly quickly,” she says. “Either way, grooming is usually an enjoyable experience for both dog and owner if conducted regularly and started at an early age.”

According to breeders, it is often necessary to place your name on a waiting list to obtain a St Bernard puppy, especially if there is a preference for a specific coat type or sex. “Reputable breeders should be able to offer full support, breed knowledge and background advice to the prospective buyer, as well as offer some guarantee of the quality of the puppy and terms of sale,” Egglestone says. “All puppies should be wormed, vaccinated and even microchipped before release for sale. Most reputable breeders are only too happy to offer ongoing support for the term of your Saint’s life.”

Personality: The St Bernard is an easygoing and placid breed. It is also trustworthy, steady, intelligent and courageous. It loves being with the family and enjoys lounging around watching TV with you.

Suitability: Saints are suitable for anyone who has the time for and enjoys giant breeds. This dog makes a wonderful family pet but must be supervised with young children as it sometimes forgets its size.

Favourite activities: Being with you! The Saint enjoys a daily walk or run in the park but care must be taken when it’s a young pup so you don’t overdo it. The St Bernard enjoys being inside the house so be prepared to vacuum on a regular basis. They are not suited to anyone who loves a spotless house as they shed through the year.

Backyard requirements: A good-size backyard is needed as the St Bernard is a giant breed and will happily play there with company. It does like to get out so a daily walk is a good idea. Your Saint would much rather be inside with its family than outside in the backyard by itself. As the Saint is a giant breed, always remember to leave at least half an hour between meals and exercise. This is especially important for all large and giant breeds.

Hereditary diseases: Hip dysplasia is a concern in many breeds, including the St Bernard, however most breeders screen for this disease. Ectropion and entropion are sometimes issues for the Saint; and epilepsy, cardiomyopathy and gastric torsion can be prevalent in some lines of breeding. Reputable breeders will discuss and advise on these issues.

Read more and explore where to adopt a St Bernard