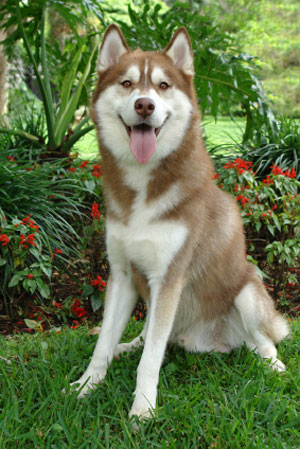 True pack animals, the Siberian Husky dog is an amazing canine that has always thrived on the company of others, both humans and other canines.

Personality: Loving, loyal, mischievous, playful, exuberant and fun. The Husky will need early obedience training and should be taught from a very young age to come when called. It is not a dog that can be let off lead if it wont recall as you’ll have no chance of keeping up with its bounding strides.

Suitability: People with active lifestyles and families who are prepared to make the time to train and care for this beautiful breed, which requires lots of mental and physical stimulus.

Favourite activities: Racing, weight-pulling, bushwalking, running, jogging and playing. This high-energy dog will happily join you in any high-impact activity, but will equally enjoy a lazy afternoon snuggling on the couch.

Watchdog qualities: Siberian Huskies are not guard dogs, but they will let you know when someone is approaching their territory.

Backyard requirements: High fences are necessary because Huskies can jump 180cm from a sitting position. Hoses should be kept out of reach. Its worthwhile to provide an area or sand pit for digging as Huskies are notorious for rearranging gardens.

History of the Siberian Husky

Not many breeds trace back to such heartfelt and uplifting tales of survival. With ample strength and amazing courage, the Siberian Husky was bred to be a different type of working dog to a hunting or sheepdog. Amazing tales surround this breed, which was developed over a period of 3000 years to become the hard-working, reliable and sweet-natured Siberian we know today.

Originating in Siberia, as the name suggests, the Siberian Husky was bred to live in the ice-cold land inhabited by the Chukchi people and other tribes from the eastern Siberian arctic. Harsh living conditions in the arctic forced these semi-nomadic natives to expand their hunting grounds. They responded to their changing needs by developing the Siberian Husky, a unique breed of sled dog. The Chukchi people relied on these animals to survive.

The American Kennel Club reports that the Chukchis needed a sled dog capable of travelling great distances at a moderate speed, carrying a light load in low temperatures with a minimum expenditure of energy.

Twenty or more of these striking dogs were teamed together to run across the ice and through the snow at considerable speed. It has been reported that the Chukchi people and their dogs would cover up to 100 miles in one day, so the men could fish for food to feed their families.
Research indicates that the Chukchis maintained the purity of their sled dogs through the 19th Century and that these dogs were the sole and direct ancestors of the breed known today as the Siberian Husky.

It is thought that around 1900, news of these fantastic sledding dogs spread to Alaska. In comparison to its sled-dog cousin, the Alaskan Husky, the Siberian was smaller but could move faster and required less food than its larger relative. It was in 1909 that the Siberian Husky was first entered in the All Alaska Sweepstakes Race. This humble dog, raised and cared for by natives, made its first major mark in history when it was imported to Alaska by Charles Fox Maule Ramsay and his team.

Driven by John Iron Man Johnson, they won the 400-mile race in 1910, marking the beginning of an amazing run that saw Siberian Huskies win an impressive tally of racing titles in Alaska.

According to Bob Thomas from www.workingdogweb.com, the legendary John “Iron Man” Johnson team completed the race in 74 hours, 14 minutes and 37 seconds. This time was never matched, even when the race was re-run within the last decade.

Another marker in history for this breed occurred in 1925, when the city of Nome in Alaska was struck by a diphtheria epidemic. There was only one way to get the urgently needed antitoxin to the sick residents of Nome, so many of the nations sled dogs and their drivers were sent to get the lifesaving serum. From then on, this run was known as the heroic serum run.

One of these drivers was Leonhard Seppala, a Norwegian man who came under the spell of the Siberian Husky in the early 1900s. Today, there is a breed of the Siberian Husky known as the Seppala Siberian Husky. Seppala became a legendary dog driver after he was given a team of Siberian Huskies by his employer. By the end of 1913, Seppala had earned a reputation as a capable driver, and from 1914 to 1917, his dogs dominated the All Alaska Sweepstakes races.

Seppala received significant press attention for the serum run and took his dogs on a personal appearance tour. He was then invited to compete in the sled dog races in New England. The superior racing ability and delightful temperament of Seppala’s Siberian Huskies won the respect and the hearts of sportsmen across America. According to the American Kennel Club, it was through the efforts of these pioneer fanciers that the breed was established in the United States and AKC recognition was granted in 1930 and then later in England, Europe and Australia.

At home, the Siberian Husky is known to be a loving family dog that enjoys being with its owners. Since they are such energetic and strong-minded dogs, they can be hard to train. According to Sheri Bain, who has been breeding Siberians for nine years, you just need to be creative in your training methods.

A happy Siberian is one that knows its boundaries, so basic obedience training is a must, Bain tells Dogs Life. Whilst they are generally harder to train, it is by no means impossible. Many Siberians enjoy participating in obedience, as well as the sport of agility.

Bain loves her Siberians and finds them to be great characters, although they can be a handful in some areas due to their independent nature. The most important thing to be aware of is the Siberians strong desire to run. Your dog should never, ever be let off its lead. They are excellent family dogs that thrive on being included as a part of the family pack, Bain says.

Daily: Walks, runs and games. Access to fresh water and shade a must.

Weekly: Regular brushing helps keep coat and skin healthy. The Husky will blow its undercoat once or twice a year so brushing during this time is essential.

Monthly: Heartworming and bathing when needed.

Hereditary diseases: Hip dysplasia and the eye problem Progressive Retinal Atrophy. But buying from a registered breeder who tests for hereditary diseases will significantly reduce the risk of a dog having or developing these problems.