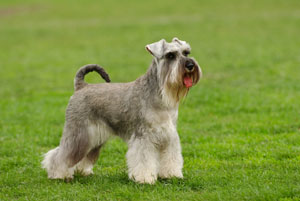 The Schnauzer dog breed is known for its constant loyalty, entertaining behaviour and love for its family.

Personality: All three varieties of Schnauzers share similar personality characteristics such as a love and loyalty for their chosen people and a craving for human contact. Schnauzers love to entertain and have a mischievous streak, but are easily trainable.

Suitable for: Either families or singles prepared to welcome a dog into their home and their hearts. This is not a breed that can be left in the backyard with nothing to do all day. All varieties of Schnauzers can be boisterous and can accidentally knock children over during play, so supervision is a must.

Favourite activities: Schnauzers love to be wherever you are. They enjoy socialising, going on bushwalks, having picnics and basically following in your footsteps. They love to play and will entertain you with their sense of fun. They are excellent at the sport of tracking, with their keen sense of smell and strong trialling abilities.

Watchdog qualities: This breed was bred to watch so makes an excellent, alert dog. They are always on the lookout for suspicious people and activities (busybodies would be a better name for them!) and will give you a quick, shrill bark to warn you of strangers or unusual occurrences.

Backyard requirements: This breed happily lives in an apartment as long as its exercised outside at least once a day and taken on fun walks where it can sniff to its hearts content. It should never be forced to spend all of its time in the backyard it thrives on human attention and is best when with its family. Regular exercise, plenty of games and interaction with the family are imperative to raising a happy and healthy Schnauzer.

The Miniature Schnauzer was shown as its own breed in 1899 and today has upstaged its larger rivals as the most popular of the Schnauzer trio. Originally bred for killing rats on farms, it readily adapts to a wide range of living environments thanks to its happy-go-lucky personality. Its cuteness and compact size make it an ideal apartment dweller, but it is equally at home in suburbia, on the farm, with just one owner or with the whole family.

While the Miniature Schnauzer is wary of strangers and wont bail up a person like some other breeds, it can quickly tell the difference between friend and foe and acts accordingly. When around kids who know how to treat and respect dogs, this breed makes a great companion. But be careful when new kids or people arrive as a Schnauzer will naturally guard the people it loves the most.

As a puppy, the mini can be an ingenious and mischievous addition to the household. Puppy socialisation and early, regular obedience training are recommended and should put your Schnauzer in good stead as a loved family member for the rest of its life.

Be sure to provide your Schnauzer puppy with plenty of stimulus such as short walks, lots of toys and short bouts of training. Left with nothing to do it will become destructive, dig up the garden and destroy whatever is in its path. Fortunately, the minis tend to mature quicker than their larger counterparts and are considered mentally mature when they celebrate their first birthday (though many Mini Schnauzer puppy owners are sure to disagree with me here!).

This breeds sense of fun will keep you on your toes and laughing for a good part of the time you spend with it. It loves to entertain, will take great delight in showing off to your guests and its happy face and ever-wagging stump will keep all in its presence in stitches.

Miniature Schnauzers are renowned for their loyalty to humans and comical nature; one Sydney Schnauzer even has a statue dedicated to him.

Biggles, who closely resembled a mini Schnauzer, was a much-loved member of The Rocks community. He could be seen on the back of a bike, travelling in a milk crate, with his daredevil pillion-riding owner keeping control. So well known was this dog that the NSW Minister for Planning and Housing recently unveiled a statue and memorial in the dogs honour.

If you’re interested in seeing the statue for yourself, check out www.zeta.org.au/~schnauza/biggl.html for more information. Unfortunately, Biggles daredevil attitude also led to his demise and he was last seen chasing a rat off a cliff near Mrs Macquarie’s Chair.

Standard Schnauzers are both cuddly companions and alert watchdogs a combination of both brawn and brains. This breed is a star in the sport of trialling and is so versatile it readily adapts to a wide range of tasks. Take one of the most famous of all Standard Schnauzers, a dog named George, who only recently made medical history by being the first dog trained to sniff out cancer.

George was trained by a dermatologist to sniff out skin and lung cancer in patients and had a whopping accuracy rate of 99.7 per cent.

His amazing sniffing ability is a Schnauzer trait, so new owners should look at harnessing this ability as a way of keeping their dog stimulated mentally and physically. Long bushwalks where the Schnauzer can put its nose to the ground and follow scents are some of the breeds most favourite pastimes and, should you want to get involved in the canine sport of tracking, there’s no dog better equipped for the challenge.

The Standard Schnauzer was the original of the three Schnauzers and the prototype for the Giant and Miniature versions. The breed developed in Germany and is believed to have appeared in a litter of German Poodle-Grey Wolf Spitz crosses.

The breed was further developed by travelling German tradesmen who needed an alert and compact dog that could act as guard without taking up too much room in their carts. These dogs were also trusted companions that looked after the children of the family while the adults were working.

The breed was suited to droving and ratting work and was later used as a messenger during World War I. Standard Schnauzers were first shown in the late 1800s under the breed name of Wire-Haired Pinschers, and a breed standard was prepared in 1880.

Whether you choose a Miniature, Standard or Giant Schnauzer, all three need careful and regular attention paid to their coats. Generally, the harsher the coat of your Schnauzer the less grooming required, but all will need to have their coats either hand stripped or clipped by you or a professional groomer.

Maintaining a Schnauzer in show coat is a lot of hard work, as breeders will attest, but the results are dazzling. Getting this coat often takes three to five hours using a stripping brush to strip the hairs individually from the coat. This must be performed two to three times a year to keep coat in optimum condition. If you want your Schnauzer in show coat, ask your breeder to recommend a professional groomer to you, as its important that the groomer is knowledgeable about the Schnauzer and its unusual coat.

Most pet owners choose to keep their Schnauzers coat in a simple summer clip. This will need to be performed by you or a groomer every six to eight weeks. Hair around the face will also have to be trimmed to stop hairs growing into the eyes and mouth. If you do choose to keep your Schnauzer in a pet clip, you may find that your dogs harsh outer coat becomes a lot softer over time.

If you like the look of the Schnauzer and love big dogs, this big breed makes a lovable and loyal companion The Giant Schnauzer is the largest of the three Schnauzers.

It should closely resemble the Standard and the Miniature but, like the other two, is a distinct breed.

Bred in Germany in the Middle Ages as a common herding breed, the Giant Schnauzer soon became a noble cattle dog and sheep drover.

This breed is a true working dog and, when first exhibited in Munich in 1909, was called the Russian Bear Schnauzer. In Germany, the breed is known as das Riesenschnauzer.

The breeds good looks, alertness and intelligence came to attention in Germany just before World War I where they were trained as police dogs a role they are still used for today.

In Canada and the Unites States, the Giant Schnauzer is also used for rescue work and as a Customs dog in airports.

A large and powerful breed, the Giant Schnauzer is playful, spirited and alert. It loves being with its family and is good with children, but like all breeds must be supervised with young children.

Being a protective, courageous and loyal breed, this dog will risk its life for its family and property, so obedience training is necessary from a young age. However, their willingness to please means they are easily trainable.

The breed does enjoy a daily run in the park and will not take kindly to being left in the backyard.

Their intelligence and need for constant mental stimulation will ensure a destructive dog if left in the backyard to amuse themselves.

A distinctive feature of the breed is its powerful muzzle, which ends in a moderately blunt wedge and a long and coarse beard. The Giant Schnauzers harsh double wire coat comes in two colours black and pepper/salt and requires skilled professional grooming at least twice a year and weekly grooming in between to keep it in good shape.

The breed is robust and hardy but, to ensure a sound dog, always buy a puppy from a reputable breeder registered with the canine council in your state.

Daily: A balanced diet, with plenty of access to fresh water. Daily walks are a must.

Weekly: Trim hair around face and feet when necessary.

Monthly: Coat maintenance, ear cleaning and nail trimming. Often best left to the professionals. Coat can be hand-stripped or clipped.