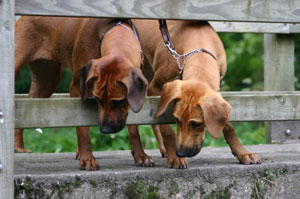 The Rhodesian Ridgeback is a devoted companion that loves to be around the family, no matter what they are doing!

Personality: Totally devoted and affectionate towards family, the Rhodesian Ridgeback is happiest at your side.

Suitability: A great companion for people who do not spend long periods away from home and enjoy spending time with their dog. A great family companion, the breed enjoys the company of children but because of its size, young children should be supervised around the dog.

Favourite activities: Whatever you are doing! The Ridgeback is content going for a walk or watching television, as long as it is spending time with its family.

Watchdog qualities: The breed is generally not a barker but will alert you to anything unusual happening on your property. If it does bark, its best to check out why!

Backyard requirements: The Rhodesian Ridgeback does not need a large backyard but he will enjoy a daily walk and an off-leash run once or twice a week. This breed is happy to lounge around all day but will become destructive if left alone for long periods at a time.

The breed standard for the Rhodesian Ridgeback was drawn up in 1922 in South Africa. However, references show the Hottentots of Southern Africa kept ridgebacked dogs as far back as the 15th century. In the 1800s, its believed these indigenous ridgebacks were bred with the European settlers mastiffs and scent hounds to produce the breed we know today.

The Rhodesian Ridgeback, also known as the African Lion Hound, was originally used to accompany big-game hunters in lion country or Zimbabwe (formerly known as Rhodesia) and their size, strength and great endurance made them perfect for the role. The breed wasn’t used to attack lions, but rather to trail the game, bale them up and then bark to attract the hunters attention. These days there are few Ridgebacks in a working capacity as the breed is mainly used as a companion dog.

Linda Hardner, devoted guardian and Secretary/Puppy Referral Officer for the Rhodesian Ridgeback Club of Victoria Inc, purchased her first pup in 1987 and hasn’t looked back since. You could say that we are owned by Rhodesian Ridgebacks, she laughs. We currently own four, ranging from 18 months to 13 years, but we have only bred two litters in this time, being happier to own them rather than breed them, states Linda, who also has two children under 12.

The Ridgeback is a gentle and loyal breed which must be included as part of the family. They want to do things with you, whether that’s sitting on the couch watching television or running at the park, says Linda. They appeal to people of all activity levels but they will still need a daily walk and a big off-lead run once or twice a week, she stresses. On cold evenings they would prefer to stay indoors and forgo a walk but if you insist they will probably bowl you over getting out the door, she says with a smile.

The stubborn nature of the breed can often make training difficult, but they do want to please their guardians and with patience, persistence and gentle training you will get there in the end. Most Ridgebacks get bored with long repetitive obedience classes but given the correct training they can be easily house trained and taught basic obedience work, says Linda. She adds there are several Ridgebacks doing obedience, agility and jumping successfully throughout Australia.

Ridgebacks like having people around and do not like being ignored. They can be destructive if left too long on their own, as Linda found out with her first dog. We arrived home very late one Friday night. As punishment our dog had taken one piece of clothing off the line (my shirt) and was sitting on it at the back door. Of course it was ripped, dirty and belonged to the person who fed him. I got the message, she says. However, this devotion will mean you’ll have plenty of funny tales to tell and a best friend for life.

While Rhodesian Ridgebacks make wonderful family additions, as with all breeds, young children need to be supervised when playing with the family pets. From my experience, this breed is very tolerant of children and can put up with endless harassment, says Linda. When they have had enough, they simply move to another room or outside to have a rest. The biggest danger for small children is being whacked across the face by a waggly tail when the dogs welcome someone home, she says, adding that the breed is also a great watchdog as it will only bark when something unusual is happening. It may be someone arriving at the door or driving up to your gate, or a strange noise outside in the night, but when the dog barks it is best to investigate, stresses Linda, who has heard many tales of dogs chasing intruders away.

A strong breed capable of great endurance, the Ridgeback will certainly frighten off any would-be intruders but overall it is a friendly and affectionate dog. With a ridge of hair along its back, growing in the opposite direction to the rest of the coat, Ridgebacks are easily distinguishable and the short glossy coat requires only relatively low maintenance and an occasional groom. The short coat is easy to look after, says Linda, and only requires a wipe over with a wet towel whenever needed. An occasional bath or swim is also sufficient to keep the coat clean.

If you are interested in adopting a Rhodesian Ridgeback and are prepared for such a large devoted breed, then contact the canine control council in your state for a list of registered breeders. Puppies are available throughout the year but are not bred on a huge scale. Therefore you may find that it takes a few months from your initial enquiry to get one because of the limited supply, says Linda.

1. The first being Hip Dysplasia.

This can be a problem in all big dogs and we therefore insist our breeders have the paren’ts of any litter hip x-rayed and scored to make sure they are suitable for breeding. The lower the hip score the better, with a perfect score being 0, says Linda. Doing this does not eliminate the possibility of a puppy having hip dysplasia but it certainly decreases the likelihood of it occurring. These results are available to potential puppy purchasers from breeders, she says.

2. The second concern is Dermoid Sinus.

This is an inherited condition that a puppy is born with, says Linda. It takes the form of a thin, thread-like hair-lined tube attached to the cervical vertebrae and runs up to the surface of the skin. It is not easily detected and has to be felt for beneath the skin by pulling the skin upwards and running your thumb and finger downwards. If you were to shave the dogs fur you would see the exit point or dimple in the surface of the skin. It is most commonly found in the middle of the back of the neck but has been found elsewhere. Eventually this tube will become infected and an abscess will form. This causes extreme pain for the dog and can only be removed surgically, explains Linda. Most breeders will not put puppies through the trauma of this operation and will humanely euthanase puppies at birth. It is therefore important that buyers question whether puppies have been checked for this condition. Some breeders are unaware of it and will sell puppies with this problem to poor unsuspecting puppy purchasers, stresses Linda.

Daily: The Ridgeback enjoys a daily walk and needs a balanced diet which includes vegetables, raw meaty bones and fresh water. Always leave at least half an hour between meals and exercise.

Weekly: A good run in an off-leash area once or twice weekly will keep your dog in good shape.

More info?
If you would like to order a book about this wonderful breed, write to The Rhodesian Ridgeback Club of Victoria Inc, PO Box 7109, Karingal Centre, Karingal Vic 3199. The Booklet of Breed Information also includes information from Pauline Sadler, author of The Rhodesian Ridgeback in Australia. Check out their website at http://rrcv.org.au.