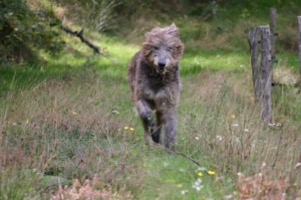 Known as the world’s tallest breed, the gentle Irish Wolfhound has been a symbol of Ireland’s cultural heritage since the late 19th century.

The Wolfhound was so popular that the Irish kept exporting them until near extinction. The breed was saved in the late 19th century by an army officer, Captain G. Graham, who apparen’tly revived the current Irish Wolfhound by carefully breeding Great Dane/Wolfhound crosses, Deerhounds and Borzois.

The Irish Wolfhound Club of NSW was established in 1976, followed not long after by the Victorian Club in 1979. Gendle cites anecdotal evidence of Irish Wolfhounds being used as hunting dogs in the mid to late 19th century in rural Australia, but the first records of imports, says Vince, come from the UK and date back to the 1920s and 1930s. Not much is known about the status or numbers of the breed between 1930 and 1970, until a Dr Phil Cunningham imported a pair from Ireland.

Other imports followed and this was the start of the serious breeding and showing fraternity that we have now, Vince says.

Breeders agree that despite the Irish Wolfhounds large size, they are unusually gentle. As with any pup, large or small, they can be boisterous, so supervision is required. And yes, Vince would recommend this breed to families with small children. One of Vince’s favourite videos is of her 18-month-old grandson crawling all over a 12-year-old bitch as she lay in front of the fire. She tells us that the babe and dog had never met before. The breed really is extremely tolerant and normally very protective toward children, she says.

Irish Wolfhounds are fairly sound, but some of their health problems include bloat, bone cancer, heart problems, elbow dysplasia and liver shunt or Portosytemic shunt (PSS). Vince reckons that some lines are more prone to heart problems than others, as with epilepsy.

All litters of pups should be screened for livershunt at six weeks of age or over, she says. While in the womb all the impurities in the blood are filtered through the mothers liver and after birth the shunt should shut down to allow the pups own liver to take over this function. When it does not shut down, all the impurities (high levels of ammonia amongst them) are allowed through into the main bloodstream. Any pups found to have this problem when tested are usually euthanased straight away. Some pups have been operated on in the USA, but it is an extremely expensive operation and in most cases just not possible.

Vince believes that by breeding selectively and only from good and healthy lines, breeders hope to lower the risk of these diseases.

If you are set on the idea of buying an Irish Wolfhound pup, please make sure you talk to either the club for more information, do your own research first or find a reputable, genuine breeder who will test for this disease, she emphasises.

Yes, they just grow, grow and grow! They may be the tallest dogs, but they are not necessarily the heaviest breed. They tend to have narrow frames and are quite lean and muscular. Their growth rate is phenomenal, Gendle tells Dogs Life; they go from being 500 to 800 grams at birth to 40kg or 50kg within nine or 10 months.

Most Wolfhounds don’t reach full height until they’re around two years old and if you are on a budget, be warned the Wolfhound pup has an appetite! Pups can eat twice as much as adult as they grow very rapidly, but the voracious eating should taper down to after about six months.

An adult dog eats roughly the same portion as a German Shepherd would. Vince suggests that when you get your pup, you follow the breeders diet for a while before changing it gradually. She also suggests giving pups calcium supplements while they grow. Pups should be given high-quality food so they get all the necessary nutrition they need for their growing bodies. If you’re unsure, ask your breeder or vet for dietary suggestions.

When dealing with the worlds largest sighthound dog, it is imperative that it obeys basic commands. Gendle says the Irish Wolfhound is generally a quick learner, but also gets bored or tired of obedience training faster than other breeds. Vince agrees, adding that they’re easily trainable when they want to be.

Gendle suggests short periods of five to 10 minutes training repeated daily rather than an hour-long session will get the right results.

An Irish Wolfhound must be able to respond correctly to your commands to sit, drop, stay and come. Being sighthounds, they love a chase. Make sure that you are able to call your dog back, he says.

Gendle also points out that come is a handy command to have when you want to prevent your dog blindly running across a four-lane highway after a rabbit.

So how soon should you start training? While most people start training their newest family addition at around eight weeks, Vince recommends lead training as early as five to six weeks. She used to lead train her litter of pups at an early age for show at three months.

While you can’t walk your pup for long, there are many things you can do in your backyard or park. Lead training is a very good beginning and should be encouraged. Vince suggests you start by putting a light lead on the pup and let it run around to get used to having something around its neck, with you supervising, of course.

Trying to control a 12-month-old Wolfhound on the lead for the first time is something to behold! she says.

This four-legged export has been a great ambassador for its country and still is today. The Irish Wolfhound is an impressive sight and you can be sure that its majestic stature commands attention wherever it goes. Its placid nature, trustworthiness, loyalty, affection, gentleness with children and intelligence makes it an ideal companion for experienced dog families wanting something different.

Irish Wolfhounds are loyal, placid, trustworthy with children, possess great stamina and have a calm disposition.

Fairly low maintenance. Breeders recommend a brush once a day if you are fastidious, otherwise a once-a-week comb through should see your Irish Wolfhounds coat well looked after and shedding kept to a minimum. They shed year-round.

Make sure you have a secure, six-foot fenced yard. This giant breed is adaptable and loves being indoors, but they are not suited to a flat or small yard due to their size. Warning: Some love to dig BIG holes!

Large-breed puppies need exercise but consideration should be given when you think how much growing an Irish Wolfhound pup does. With all giant breeds, this one is no exception. Pups should not be subjected to vigorous exercise and that includes long bouts of walking, running and jumping. These exercises can exert too much force on their growing bones; you could do more harm than good over-exercising your pup. Hold out on long exercises until the pup is at least one year old.

Irish Wolfhounds are fairly sound, but some of their health problems could include bloat, bone cancer, heart problems, elbow dysplasia and liver shunt (commonly known as Portosytemic shunt [PSS]).

For all other states not listed above, call your state’s canine association for registered breeders or go to http://www.irishwolfhound.org.au

The VIC and NSW clubs do rehome adult dogs, but only to suitable and experienced applicants. Breed standard is available on www.ankc.aust.com/irishwol.html