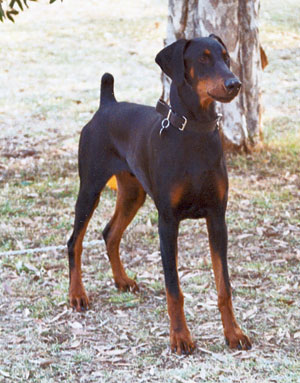 Personality: Bold and alert, the Doberman Pinscher is an extremely loyal and protective breed, but it also has a very gentle nature, craving affection and attention. Highly intelligent and very obliging, the Dobermann is cheeky in character and a lot of fun.

Suitable for: The Doberman is an active breed, so needs regular exercise and a reasonably sized backyard to run around in. But they are not a breed you can just put in the backyard and leave. They thrive on attention and like to be part of the family, with plenty of mental stimulation. They are very adaptable dogs and will be quite content indoors or outdoors, but most importantly, they enjoy being part of the family.

Favourite activities: Energetic and agile, the Doberman thrives on attention, so will enjoy any activity, as long as it involves time with the family. They also enjoy a good walk or run.

Watchdog qualities: Loyal and protective, the Doberman has good guarding qualities and will be as tough as you want it to be. Although its not overly aggressive, this breed can be quite standoffish around strangers.

Hereditary diseases: There are a few hereditary diseases to watch out for in the Doberman, such as von Willebrand’s Disease (vWD), Dilated Cardiomyopathy (DCM) and Cervical Vertebral Instability (CVI), commonly known as Wobblers. Purchasing a dog from a reputable breeder minimises the risk of such diseases.
Loyal, bold and protective, the Doberman can be an intimidating breed at first glance. However, these loveable characters do have a softer, cheekier side. Craving affection and attention, they are trustworthy companions and an ideal addition to any family, as Lucy Arblaster reports.

History of the Doberman:

Thought to be a combination of the Great Dane, German Shepherd, Weimaraner and Manchester Terrier, the Doberman was founded in the 1860s by Louis Dobermann, a German tax collector who wanted a dog to protect him on his rounds.

This protective streak led the breed to be used as police dogs during the 19th Century and later as war dogs in World War II, where they were known as devil dogs, working alongside the US Marines to flush out the enemy. Today, the Doberman is the US Marines proud mascot.

Traditionally, the Doberman has a gentle nature, but will be as tough and protective as you want it to be. A true companion animal, this breed fits well into family life, serving as a great playmate for children, with the versatility of being an indoor or outdoor dog.

However, a word of warning: if a Doberman is an indoor dog, it is likely to make itself right at home, preferring to join family members on the lounge and even in bed! Robust and agile, the Doberman is bold in appearance and comes in a variety of colours – black, brown, blue or fawn with rust red markings. The breed has a low-maintenance, smooth, short coat.

Arriving in Australia in the 1950s, the Doberman has an extremely loyal following, as Dogs Life finds out when speaking to Ray Nunn of Camden, NSW, a breeder for more than 25 years.

Nunn says he was initially attracted to the breed because they are big sooks. He actually went to buy a German Shepherd, but then this big black thing came bounding in. It wasnt intentional, but I just liked the look of them.
Nunn describes the Doberman’s personality as very loving and intelligent. Bred as a protector, the Doberman is as protective as you want it to be. It all depends how you bring them up, he says.

He also tells Dogs Life they love nothing more than activity – running, walking, agility or obedience – but also enjoy being couch potatoes. Dont let them see the lounge or they will be on it, Nunn laughs.

Nunn points out that the Doberman needs an owner who is active and strong-willed. They are like naughty two-year-olds, and if you can’t control a two-year-old in the supermarket, you will never be able to control a Doberman, he says.

In terms of maintenance, the Doberman is a breeze, requiring very little grooming. They do, however, have an abundance of energy and require moderate exercise and a reasonably sized backyard to run around in.

If you want to run a Doberman 24 hours a day, it will run, Nunn says. They are not a breed you can just put in the backyard and leave. They thrive on attention and like to be part of the family, with plenty of mental stimulation.

There are a few hereditary diseases to be aware of. Von Willebrand’s Disease (vWD), detected by a simple DNA test, is an inherited bleeding disorder, which can also affect many other breeds. Dilated Cardiomyopathy (DCM) is a disease of the heart, while Cervical Vertebral Instability (CVI), otherwise known as Wobblers, is a compression of the spinal cord, usually seen in dogs seven to eight years of age. To avoid these hereditary diseases, Nunn recommends purchasing your dog from a reputable breeder.

Another devoted owner of Dobermans is Alannah Cargill of Glenhaven, NSW, who has been involved with the breed since the mid-1980s. Cargill has two Dobermans, Sammy, 14, and Stanley, eight. She says she initially chose a Doberman because her husband was away a lot and she wanted a dog that people would be wary of, but as it turns out, her dogs are somewhat humanised, spending most of their time indoors.

Cargill describes the Doberman as very easygoing, obliging, adaptable and a lot of fun. She says they can look intimidating, but just crave attention and love company, content to be inside all day with the family.
Cargill says her Dobermanns love nothing more than to race around. We have a property at Scone and we take them up there to belt around and have a good time, enjoying all the smells, she says.

Caroline Zambrano also gives us an insight into this loveable breed. I have two male Dobermans, five-year-old Logan and four-year-old Chase, who are amazingly affectionate and want to spend time with the family all the time. They are so good with our young daughter and our lovebird! she says. Logan and Chase are also playful and can be mischievous, so my life is never dull with them. I just wish they didn’t look so scary to some of my friends. My boys would just lick them to bits! I think people who don’t know Dobermans are missing out. They complete me.

Daily: Fresh water and a well-balanced diet are essential. The Doberman enjoys a walk each day and a reasonably sized backyard to run around in.

Weekly: This breed is very low maintenance, so a weekly brush and a bath when necessary would suffice.

Monthly: Like any other breed, the Doberman should be treated for heartworm, ticks and fleas, and their nails should be trimmed regularly.

For more information on the Doberman, please contact your state canine council or breed club in your state or territory.