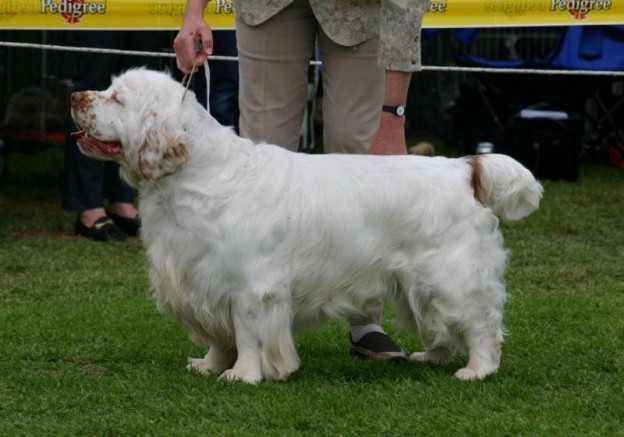 Dependable, people-orientated and friendly, the Clumber Spaniel is one of Australia’s least-known breeds. Originally bred primarily for hunting, these active dogs are intelligent and reliable.

Care and exercise
Unfortunately, the breed does have a poor reputation for hip dysplasia problems, and the eye condition entropion is another health issue to be wary of. PDP1 deficiency is a hereditary disease that is unique to Clumber and Sussex Spaniels, but has a simple recessive inheritance pattern that can be easily tested for. Before buying a Clumber, ask for a certificate for its PDP1 deficiency status or for both parents to be sure, Irving advises.
Prospective owners also need to be willing to make a commitment to their dogs health and wellbeing. Clumbers will adapt to most lifestyles, but it is still imperative for longevity and general health for the dog to be regularly brushed and given free exercise in some form, she says. A weekly brush, trimming of excess feathering every six weeks, wiping out ear canals occasionally and bathing when necessary will keep your Clumber looking great.

Suitability
Although an active breed, he is not one for rushing around the grounds and chasing balls, so this heavy, rather serious-minded dog is more suited to those who want the sensible spaniel temperament in a large frame. He is a most companionable breed and would best suit the older members of the family. With his great heart and dignity he will readily accept the youngsters but would prefer to leave the energy-using games to his smaller counterparts. Leisurely strolls are more his speed.

Friendly and adaptable
In terms of temperament and personality, Irving says Clumbers should be friendly and easygoing dogs. However, they are not outgoing dogs who will want to enthusiastically greet every single person they meet, instead preferring to get to know someone before revealing their true nature.
Clumbers love being included in all of the family activities, no matter what you may be doing. They love being with and being involved with their family exercising, walking, swimming, jogging, competing at shows or other sports and playing with the family or their toys, Irving says.
Clumbers are an elemental part of any family, although they will often have a special favourite family member. They are cautious of strangers or folk they haven’t met, but wont forget someone they like.

The Clumber Spaniel was developed on the Nottingham country estate of the Duke of Newcastle, where it was used to assist the Dukes and gamekeepers when they went hunting. The breed actually takes its name from the estate, which was called Clumber Park and is found in the north of Sherwood Forest.

These dogs were perfectly suited to working on the Nottinghamshire estates their low-set and strong build allowed them to penetrate the dense undergrowth and the white coat made them easy for the hunters to keep track of. Clumbers also possessed the necessary tenacity to stick to the trail of their game.

The Clumber first arrived on Australian shores in 1883, with the first pair coming straight from Clumber Park.

Sensible and thoughtful
Jan Irving has been involved with Clumber Spaniels her entire life. She is a third-generation Clumber fanatic and her family has owned these dogs for 50 years. I love Clumbers because they are dependable and sociable, but with a spark of fun and mischief, she says.
They are sensible, thoughtful, relatively easy to keep well groomed nobody believes you can easily keep such a white dog so clean with so little work and easy to keep fit with basic exercise.

The heaviest of the Spaniel breeds, Clumbers have a deep body with powerful legs and neck. Their thick, silky white coat helps these dogs stand out from the crowd and they also often have small markings on the face.

Some people say Clumbers moult a lot. Personally, I find they do the normal twice-yearly moult of any shedding dog, and of course they don’t have the profuse under coat of breeds like the Corgi or Malamute. Clumbers do have white hair, which does show up against just about any floor colour or furniture fabric and, like you and me, they will lose a little bit of hair throughout the year, Irving tells Dogs Life.

Irving also points out that some websites make claims about Clumbers having a drooling problem, which she denies. She says that a healthy Clumber in Australian conditions should not drool, except for that common canine reaction when confronted with a bowl of food. Drooling can be a sign of ill health or disease; it should not be and never has been a characteristic of the Clumber, Irving explains.

Finally, Irving has some sound advice for those looking to buy a Clumber Spaniel: Insist on seeing the paren’ts, speak to the breeder several times and ask if you can chat to other people who have bought dogs from their lines or their own breeding. Talk to the seller and let them know your lifestyle and basic requirements. Make the effort to learn how a healthy dog looks and behaves before taking a seller’s word on the status of the dog, she says.

She also encourages people to buy from a member of Australias only Clumber club, the Clumber Spaniel League Victoria.