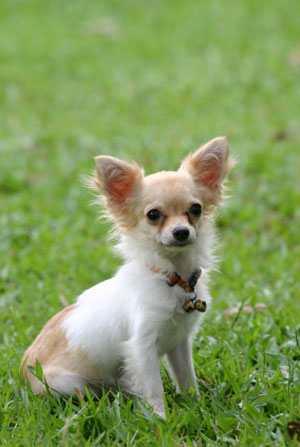 The diminutive Chihuahua may be classified as a Toy breed, but this little fellow is a tonne of heart and courage packed into a small, adorable body.

Personality: An affectionate and alert little dog which adores its family and will protect its guardians with its life.

Favourite activities: This little pooch likes nothing more than spending time with its owners and is said to love cuddling up, even creeping under the blankets of its owners bed at night. It will happily do whatever you do and will enjoy a daily walk, although the breed does not need lots of exercise.

Backyard requirements: Because of its small size, the Chihuahua does not need a big backyard and can happily live in a small space as long as it gets lots of love and attention. However, don’t be fooled by this pooch’s small build; if left outside and ignored, it can wreak havoc in the garden.

Suitability: With early training and socialisation the Chihuahua will get along with most people, but many breeders are wary of selling pups to families with small children as the diminutive dogs can get easily injured. This breed is especially good with older people and singles because it is small and easy to care for.

Watchdog qualities: Strangers beware! The Chihuahua may be small but it will defiantly alert its owners to anyone it is not familiar with. This breed is wary of strangers and, sometimes forgetting its small size, will bravely take on a much bigger opponent in order to protect its family.

Feisty and energetic, the Chihuahua is the epitome of a big dog in a small package. It is fiercely loyal and despite its small size, will take on anything which threatens it or its family in typical David and Goliath fashion.

With its origins dating back to the 1850s, this breed takes its name from the Mexican state of Chihuahua. It is said to descend from the Cannis Raptor Rodentis or Killer-Dog Mouse which lived in the deserts of America and Mexico. The Chihuahua flourished until the early 1900s but then waned in popularity. When American tourists began visiting the region in the 1920s, the little dog gained popularity with them and today is one of the most loved house pets around the world.

The Chihuahua is again experiencing a rise in popularity due to its Taco Bell infamy, and also because of its gorgeous pixy-like appearance and convenient size. With its beautiful, large dark eyes, this little pooch has been responsible for persuading even the most astute Chihuahua owner to give in to certain demands. This, says long-time Chihuahua owner and breeder Joan Pettit, is a dangerous mistake.

This dog must know from day one who is boss, says Joan, who, as well as a breeder, is also a Group One Chihuahua show judge. They must know the pecking order because they are very manipulative and will try to take over.

The Chihuahua is said to be very intelligent so is easy to train, but Joan emphasises you must be firm and preferably training and socialisation should start as early as possible. Ten to 15 minutes a day is enough, with rewards for good behaviour, she says. And always remember who is training who. Often it will be the Chihuahua who will end up doing the training!

Breeders stress that although the Chihuahua is small, it is not small in character and will defiantly protect itself if necessary.

I will not sell a puppy to families which have children under 10, states Joan firmly. This is not a dog which can be expected to sit still and be cuddled all the time.

If placed in the right family, however, the little Chihuahua will prove to be exceptionally loyal and will reward its guardians with never-ending love and companionship. This breed is especially well suited to older people as it is compact and easy to carry around, as well as simple to care for.

They will adapt to whatever you do, says Joan. They will want to please you constantly and will always be there with the most beautiful greeting when you get home.

While both the long- and short-hair varieties are easy to care for, the long-haired breed will need some extra attention. They will shed more and their coats can get matted if not brushed regularly. The long-haired variety will also need more frequent bathing.

Breeders point out that because of its small size, the Chihuahua can feel the cold more than other dogs so they need to be kept warm in winter. However, don’t always assume that if your pooch is shivering its because it is cold. It is characteristic of this breed to shiver if it is excited, unhappy or frightened.

Because of its profile from the Taco Bell ad, the Chihuahua has become the latest target of backyard breeders so experts emphasise that prospective buyers should look only at dealing with registered and reliable breeders if they want a sound and healthy pup. And if you shop around carefully and do the right thing by your dog, you will be rewarded many times over, they say.

This is the cutest dog, says Danni Blackburn, who is the proud owner of seven-year-old Ren. They are very loyal and easy to maintain. My dog is cheap to feed, I can take her anywhere and she doesn’t need lots of space.

Danni points out that Ren is wary of strangers and doesn’t really have time for new people, but will accept the person once she gets to know them. When it comes to loyalty, however, Danni couldnt do better. Ren clearly has eyes only for her guardian, following her around everywhere.

She is very lovable and adores snuggling up. So when its really cold and she creeps under my sheets, I have my very own hot-water bottle at night.

The Chihuahua descended from a desert-dwelling dog which developed the famous Chihuahua parasol-like big ears to survive in the hot desert conditions. The ears shaded the face from sun, and also collected moisture from the air and condensed it through the skin, supplying the dog with water. New-born pups were shaded from the sun by their mum’s big ears and in winter, those same ears would be used to snuggle up in.

Daily: Spend lots of time with your Chihuahua and provide copious amounts of love and cuddles. This is not a breed to be left to its own devices.

Weekly: A brush once a week, extra brushing for the long-coated variety. Make sure eyes and ears are clean.

Monthly: Check if toe nails need clipping. Bath if necessary but always take care not to get water in the ears as infection can occur.

Hereditary diseases: Chihuahuas are prone to weak knees but buying from a registered and reputable breeder will reduce the possibility of buying a puppy with an inherited problem.