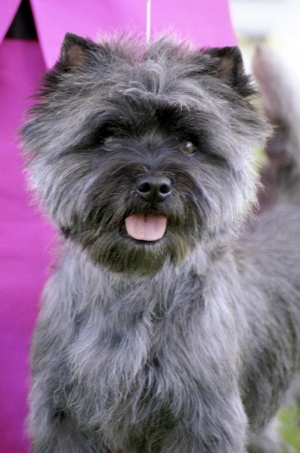 Personality: The Cairn Terrier is an alert, active, hardy, assertive and outgoing little pooch. It is keen to please and will generally bond with one particular person in a household.

Suitable for: The breed is suitable for most people, but keep in mind that given its boundless energy, a young puppy may not be suitable for an elderly person.

Favourite activities: Cairn Terriers love nothing more than curling up on warm laps, hunting, swimming, digging, playing and being with their families.

Watchdog qualities: For a small dog, this breed has a rather loud bark and will do so selectively if trained appropriately, making it a good watchdog.

Hereditary diseases: The breed is fairly healthy and free of major genetic problems, but it has been known to suffer from undescended testicles and slipping patellas. Another potential problem is liver shunt.

Toto from The Wizard of Oz is probably the best-remembered Cairn Terrier of today’s popular culture. Rest assured, Dorothy’s fearless and mischievous on-screen sidekick is just as memorable off-screen.
Instead of encounters with lions, tigers and bears, its more of a case of close encounters with foxes, badgers, otters and weasels at the turn of the 20th century.

These feisty Terriers were originally bred to hunt in the rocky outcrops of the Scottish highlands and western islands, particularly the Isle of Skye of Scotland. Many believe that the Cairn Terrier is the oldest purebred British dog, even older than the Scottish Terrier. At the turn of the century, the Cairn was also known as the Short-Haired or Prick-Eared Skye Terrier.

Established in the mid-1960s, the club has been run out of Sydney until recently, but the lack of metropolitan members has forced its relocation to Queanbeyan in the southern region of NSW. Club members are encouraging city folk with Cairn Terriers to join the organisation to get the numbers up again.

Bartram recommends the breed to most people, but offers words of caution if your energy levels are low or if you are elderly. A young energetic puppy might not be suitable for an elderly person, where an older and more settled dog may fit the bill, he says. In general, though, Cairn Terriers are suitable for those who are willing to spend time with them, exercise them regularly and put a little effort into maintaining their coat.

Bartram recommends the breed to families with young children, as he believes the active and outgoing nature of the Cairn Terrier lends itself ideally to a family situation. Please remember that young children will need to be supervised when playing with any dog, and the Cairn is no exception.

Jill Saulbrey, former president of the Victorian Cairn Terrier Club, established as early as 1945, also emphasises that the Cairn is very adaptable, but definitely needs companionship and company. The Cairn will generally get along with most people and family members in the household, but will bond closely with one particular person.

Bartram points out to Dogs Life that most Terriers have a mind of their own. He says they are generally obedient and do well at obedience trials, but if you want a dog that will obey every command at your will, the Cairn may not your ideal choice.

Like Bartram, many Cairn enthusiasts are attracted to the rugged and natural look of the breed, its size and, of course, its active, outgoing nature. Taking into account the Cairns hardy and innate digging qualities, a secure backyard is imperative, or you run the risk of your dog wandering off and, due the breeds impulsive nature, being hit by a car.

The Cairn is an active dog, and though a good-sized backyard may be of a sufficient size to keep your dog occupied, it is always advisable to spend quality time walking and playing. This will keep your dog from becoming bored and destructive, keep both of you fit and strengthen those human-canine bonds at the same time.

Although the Cairn is relatively free of major genetic diseases, Bartram informs us of several conditions prospective owners should look out for in the breed. There have been occasional cases of undescended testicles and slipping patellas. Several liver-shunt cases have been recorded, which can be lethal if not detected early and treated.

According to Saulbrey, a very small percentage of Cairns develop liver shunt, but a simple and inexpensive test can be done before the puppy leaves for its new home. This is important to ensure that the dogs liver is functioning properly, and many conscientious breeders are now starting to test for liver disease in their stock to ensure the future longevity and health of the breed.

Bartram stresses that the test is a small price to pay for peace of mind and an important factor to think about before purchasing your dog.

Grooming the Cairn need not be a very time-consuming activity. If your dog has a coat of the correct texture, grooming should be fairly easy.

Because it is a double-coated breed, Bartram recommends brushing the coat and combing through once or twice a week to prevent it knotting and to keep it healthy. The breed sheds once or twice a year, and if youve been maintaining the brushing and combing, enough coat will have been removed to keep it tidy, but it may be necessary to have the dog stripped.

Saulbrey suggests a weekly groom and, at the same time, any dead hairs should be removed by plucking with finger and thumb. For those of you wanting to outsource this, there are grooming parlours that will clip and hand-strip the coat, so it doesn’t lose its colour and texture.

Bartram advises owners to learn to hand-strip the coat themselves. New owners should talk to their breeder for advice. The NSW club has coat-care days in Sydney a couple of times a year.

If you think you’d like a Cairn Terrier but would like an adult dog, the Victorian Club has sales officers who also help re-home older dogs. Saulbrey tells Dogs Life that the Cairn can be successfully re-homed, as its very adaptable. The club also has a rescue service.