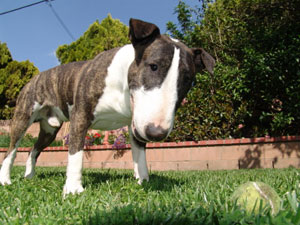 With their clean lines, strong, robust physique and wonderful sense of fun, both the Bull Terrier and its little cousin, the Miniature Bull Terrier, make wonderful family companions.

Loads of fun, with a lovely sense of humour that will have their owners in stitches.

A great dog for:

The purebred Bull Terrier is recognised as a great dog for families with children. However, work with respected breeders to ensure you are getting a purebred.
The Mini Bull is great with families, and its size means it is often easier to handle for older or younger family members.

Both sizes like walks, but their build doesn’t make them an ideal dog for joggers. They’re more like a quarter horse, preferring to exercise in short bursts.

A strong 180cm fence for BTs and a 120cm fence for the Minis. BTs have a strong head and don’t think twice about pushing it straight through a paling fence.

One of the things that scares off would-be intruders is the look of BTs, but the BT would be more inclined to give the intruder a lick rather than a bite.

The Minis, like their bigger cousins, would sell their soul for a tasty treat, so scaring away intruders doesn’t rate as one of their strong points.

Talk to owners of either the Bull Terrier or Mini BT and they’ll be quick to recall how affectionate, loving and mischievous they are and what a real pleasure they are to own. Once this breed has made it into your home, you’d be hard pushed to find another dog to fill its shoes.

To a Bull Terrier of either size, their love of people means everyones’ lap is fair game, which can prove interesting if you’ve got a large male who thinks: I like the look of that knee. I think Ill have it.

Breed enthusiast and secretary of the NSW Bull Terrier Club, Ken Foster, first fell in love with Bullies when he saw them at a conformation show at Castle Hill, NSW, more than 20 years ago.

I saw these Bull Terriers going into the ring and screaming and throwing abuse at one another, but what really caught my eye was that while they were going hell for leather, they’d then turn around and give their owner a lick, like: Did I do right?

Ken says a purebred Bull Terrier is unlikely to bite someone and hes never heard of it happening. However, always buy your Bull Terrier from a recognised breeder to ensure your BT hasn’t been crossed with another breed.

Ken says the Bull Terrier can be a very imposing-looking dog, but they’re real sooks when it comes to people. And if properly introduced, they can live happily with other family pets.

He says they’re not a breed that will thrive in the obedience ring because they can be very stubborn. However, they are amenable to discipline and do need a sound training program to bring out the best in them.

They can be stubborn and have dominant personalities, so they need to be put in their place in the pecking order or else they can decide to run the household.

The breed was developed in England in the early 1800s for dog fighting, so its important for owners to realise they have in their care a dog which will fire up against others if provoked. While they might not start a fight, Ken says they certainly will finish it. Its important to remember that it is in their heritage its in there, he stresses.

During the past 15 years, Bull Terriers have developed a bit of a reputation with other dogs. However, Ken says breeders have fortunately recognised the problem and now breed for a sound temperament.

Even their breed standard calls for controlled aggression towards other dogs, says Ken. A reputable breeder will not tolerate a bad temperament. The BT is a real individual, and sometimes having one around can be likened to living with a muscle-bound two-year-old.

Mini in size, but not in nature. Miniature Bull Terriers offer their owners plenty of punch in a small, very manageable, but all-Terrier package.

Stalwart of the breed and the woman responsible for establishing Minis in Australia, Joy Schafer, of Windsor in New South Wales, describes them as bubbly, friendly and people-oriented dogs.

A dog that will do anything for a laugh (or a tasty treat), Minis have endeared themselves for many of the same reasons their bigger cousins are firm family favourites but also for a few reasons uniquely their own.

Joy sings the praises of her Mini companions saying they make a very good house dog because they fit into smaller spaces and don’t take up so much room on your lounge or your lap. They are well suited to older people who have owned

Bull Terriers before but want something more manageable.

But they certainly don’t represent a down-grade from their full-sized friends.

Joy says Minis mature quickly and owners don’t have a puppy for long. They grow fairly much in proportion and are designed to look just like a Bull Terrier but with a height restriction of 35.5cm at the wither. However, they are robust and strong for their size.

In the home, Minis love family life and want to be where the family action is. They love strangers and would run away with anyone who would open the fridge for them, so if you want a guard dog this is not the breed for you.

However, if you want a unique, peoples dog, guaranteed to get under your skin for a lifetime, they are perfect.

Joy says there is a subtle difference between Bull Terriers and Mini Bulls temperaments; the Minis seem to want to please you more.

The breed is used extensively for agility in the United States and they seem to thrive on the activity. Like their bigger cousins, Minis love toys, but their teeth and jaws are equally capable of demolishing seemingly indestructable products. Joy recommends not leaving toys with them to ensure they don’t accidentally swallow chewed pieces.

Make sure any balls are large enough that they can’t be swallowed. One Bull Terrier became famous for swallowing a golfball, which then proceeded to unravel inside its stomach. The dog became very sick, but it was a testimony to the BTs good physical health that it did not become seriously ill from the experience.

Joy is not a fan of rawhide chews for Bull Terriers because they easily demolish the chews and can choke on smaller pieces.

She recommends that owners choose all toys and chews very carefully and to throw them away and replace them with new ones when the toys start to get near the end of their useful life.

A bad habit the Minis occasionally develop is tail chasing. They can become obsessive tail chasers so don’t encourage them to chase their tails, which is easy for people to do because they think it is fun.

Origin of the Mini BT

Miniature Bull Terriers originated in England in 1939 where smaller specimens of Bull Terriers were bred together to create a pint-sized version.

They first arrived on Australian shores in 1965, but because of the low numbers the breed died out. They were reintroduced in September 1986 into Victoria by Prior and Georgina Oldridge. Joy Schafer brought the dogs into Sydney the same year, and the breed has slowly but surely been re-established.

Australia’s breeding program has been so successful that enquiries for bloodstock are now received from England.

The self-help guide to buying a Bull Terrier

If you decide the Bull Terrier or Mini BT is for you, be prepared to convince the breeders you’re the right person to own them because most take the job of correct puppy placement very seriously.

Both breeds are hard to come by, so be prepared to wait for a puppy; but don’t worry, the wait will be well worth it.

BT breed enthusiast Ken Foster says a good owner is someone who is at home and has loads of time to spend with the breed. My first question to anyone looking for a Bull Terrier is why do they want one?

The right answer is that they’ve owned one before and they love the breed. Once you’ve owned a Bull Terrier you’ll never own another dog either the standard or the miniature.

When selecting a puppy, having a good relationship with the breeder is important. Breeders should be happy to offer ongoing support and advice, particularly if you encounter any training problems you might be too inexperienced to handle on your own.

Daily: Bullies love their tucker so make a meal of feeding time. There are various schools of thought on whats best for them but they seem to enjoy most diets supplemented with raw chicken carcasses. The occasional large thigh bone that wont splinter will keep them amused. Their short coats don’t require much work but a daily once-over with a hounds glove or rubber-backed brush will keep them spick and span.

Weekly: Bullies need a lot of human companionship, so whatever your weekly activities entail, keep them involved and they’ll reward you with loads of love.