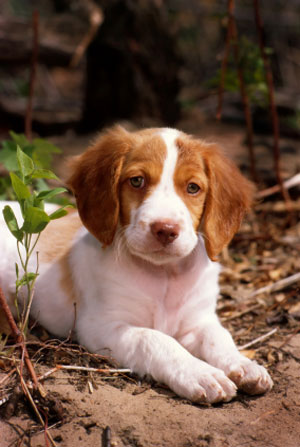 Personality: The Brittany is generally eager to please and friendly. Essentially, they are people dogs and are extremely affectionate and loyal. Bred as working gundogs, they are active and need to be kept busy. After a day out hunting or participating in other active pursuits, they like nothing better than to relax with their owners. Generally, the breed is friendly with other dogs and they also appreciate human company so will quite happily follow their owners around from room to room.

Suitable for: The Brittany primarily suits an active person who is willing to spend time with their dog and provide consistent training. The breed makes a great family pet and is very affectionate and intelligent. They’re good with children, but can knock down a small child when they romp and play, so supervision is required. Young dogs can be very excitable and therefore inclined to jump, so this behaviour should never be encouraged as it may lead to scratches on skin. They make a great pet for anyone willing to devote plenty of time to train and exercise their dog. Without this commitment from the owner the dog can quickly become bored and destructive.

Favourite activities: While mental exercise is vital for a healthy Brittany, physical exercise is extremely important. Born to spend the day in the field hunting, this dog loves nothing more than a good hunt or a run in the field and a nice, long swim. By providing your dog with daily exercise you can help prevent the demise of your backyard. The breed enjoys being in the house or garden with owners, howe’ver they can be escape artists so the yard should be secure. The Brittany can be the ideal hunting, agility, tracking, obedience and flyball partner and is always up to a challenge.

Watchdog qualities: The Brittany will sound the alarm when a stranger appears, but is not considered a guard dog because its very friendly.

Hereditary disease: Generally, the breed is quite healthy, howe’ver responsible breeders can now have their dogs hip, elbow and eye scored to reduce the chances of hereditary diseases occurring. There have been some cases of epilepsy, hip dysplasia, glaucoma and skin allergies.

According to Pedigree.com, in the 1850s, English sportsmen went to Bretagne with their sporting guns and well-trained Pointers and Setters and bred their dogs with the local dogs, which were later crossed with a French pointer called a Braque. This ties in with the theory that the Brittany was originally classed as a Spaniel because it was thought to have been developed as a result of a cross between the English Setter and a small Frenchland Spaniel. In 1983 the Spaniel reference was officially dropped because Spaniels mainly flush out game while Brittanys hunt, point, flush and retrieve their game.

Many believe the Brittany has been around since the early 19th century and was bred primarily as a bird hunter by peasant farmers. When the dog scents its prey, it moves in close and positions itself in a point. Then, after the hunter has shot down the birds, the dog moves in and retrieves any fallen prey. Their size and agility allow them to quickly move through dense scrub or to run across open country. What makes this breed quite unique is that the Brittany has not been split into show and field lines, ensuring a rare quality of bloodline that sees the breed still able to hunt while looking remarkably pretty and show-worthy at the same time.

Enjoying an active life
With this fascinating lineup of hunting skills, it goes without saying this is an intelligent breed that enjoys an active life. Keeping up with a Brittany requires someone with energy and the patience to train their dog from a young pup. As with all active dogs, this breed requires training to develop good manners and to learn the boundaries of acceptable behaviour.

Most owners will find their new companion a bright and willing participant, but remember that the Brittany does not respond well to shouting and threats. This is a kind-natured and sensitive breed that responds well to positive training.

Helen Green, a member of the Brittany Breed Club, explained that its a good idea to keep training sessions fun and short to maintain the interest of your dog.

The Brittanys activity level makes it an ideal choice for someone wanting a hunting, agility, tracking, flyball or obedience partner, she said.

Recent years has seen the breed competing and earning titles in most states of Australia in the field of agility. Green recalled an accomplished agility dog that had a real flair for comedy in her earlier years.

One young agility dog, with the call name Bella, had some interesting moments when she first started, Green said. She was well-known for being a social butterfly and visiting the judge, officials and spectators for a quick hello. She really took the cake one day when a netball team decided to watch the agility after their game. The girls were all a credit to their paren’ts as they sat in a long line, watching quietly well back from the ring. Seeing so many children together was too much for Bella, who decided to run over and say hello. Starting at one end of the line she worked her way along until she got to the girl with a packet of Cheezles. She stuck her head in the packet for a Cheezle and the girls all jumped up squealing, so she promptly ran back to finish her agility course.

Its nice to see an active breed with such a sweet and funny nature this is something the Brittany is certainly known for.

Daily: Each day this breed needs to receive attention. These animals thrive on interaction and require mental and physical stimulation each day. Feed them a well-balanced diet and make sure fresh water and shade is always available.

Weekly: The coat of a Brittany is low maintenance with minimal brushing required, howe’ver they generally enjoy a brush and it is a good idea to give them a brush each week. It is important to check for grass seeds and ticks every few days, particularly in tick season, and pay particularly close attention to the eyes, ears and toes.

Monthly: Foot fur may need to be groomed and the toenails regularly clipped. Ensure heartworm vaccinations and tick treatments are up to date. If the dog is to be shown, washing and brushing requirements will increase and some trimming will be required.