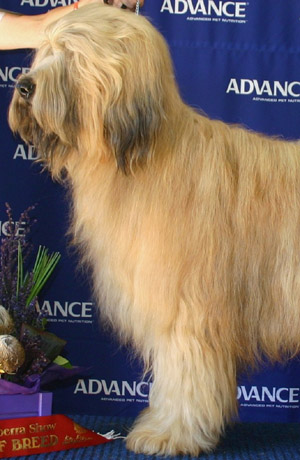 Described by Thomas Jefferson as the finest house and farm dogs I have ever seen, its clear that the Briard has much more to offer than a beautiful shaggy coat.

Bred for centuries as watch and herd dogs on remote French farms, the Briard was also the official dog of the French Army, and was used to carry supplies to the front line and served as a sentry dog. Due to the breeds keen hearing, they were also used by the medical corps to search for wounded soldiers. Unfortunately, it was this role in World War I that contributed to the Briards status as a rare breed. Many were lost as they searched bodies, looking for any sign of life. It was once said that any man a Briard passed was beyond assistance.

Today, the Briard is still an excellent guard dog, without being too vicious. With their wonderful hearing, reported to be the most acute of any breed, nothing gets by unnoticed.

One person who knows the dog only too well is Briard enthusiast Anne Mitchell. A breeder for the past 27 years, shes certainly learnt a thing or two about this intelligent canine. They bark only as a warning, but when they do, both their bark and growl can be pretty fearsome. Its certainly reassuring when you’re alone in the house at night, she says.
That’s not to say the Briard is always so brave. Mitchell recounts an amusing story about the night an unwanted visitor dropped by. We were woken up one night when one dog, JJ, let out a blood-curdling scream and launched himself onto our bed, she recalls. On investigating, we found a frog had dropped from our high ceiling right on top of him he had never moved so fast!

Getting to know you

Mitchell is the first to admit the breed isn’t for everyone. We often say that the perfect owner must be smarter than the Briard, she explains.

An intelligent breed with a streak of independence, the Briard is quick to learn, but also quick to take advantage of any lack of determination on the part of the owner. This is why the dog is suited to an active family with strong leadership qualities. Incredibly affectionate, one of the Briards greatest joys is to be with their owner. They love long walks, where they can explore ahead but continually return to check-in.

Surprisingly, the boisterous Briard also makes an excellent house dog, enjoying quiet time curled up at the feet of their owner just as much as time spent playing outside. Having said this, the Briard likes to be in on the action at all times. The greatest cruelty you can inflict on a Briard is to keep him shut outside when his family is inside, Mitchell says.
Due to its long history as a watch dog, by nature the Briard tends to be reserved with strangers. To counteract this aloofness, Briard puppies must have plenty of socialising while they are young.

This will in no way lessen their effectiveness as a guard dog. Mitchell recommends puppy preschool classes as a great way of starting the socialisation process.

Once described by a well-known actress as hearts wrapped in fur, adult Briards love children of all ages. Thanks to their extremely amiable and tolerant attitude towards children, the breed is actually known as the babysitter dog in its home country of France. In fact, people are most likely familiar with the breed from the tale Peter Pan, where the dog Nanny is featured as a devoted companion to the three Darling children. At times, however, Briard puppies can become too overwhelming for children under four to cope with, particularly when parents are first-time owners.

We can’t really talk about Briards without mentioning their beautiful shaggy coats. With a coat 10cm or longer, ample beard and moustache hair, and a long fringe covering the eyes and ears, its obvious that the dog requires regular grooming. However, it’s not as time-consuming as some might think.

Briards don’t have a thick undercoat, and the topcoat is almost straight and fairly coarse, so they are easier and quicker to groom than many other long-coated breeds. Owners should still allow an hour or two once a week for grooming, and longer if they miss a week. Briards don’t have an annual moult, so regular grooming not only keeps the breed looking good, but minimises the amount of hair shed around the house.

To find out more about the Briard or to find a breeder, contact your state canine council via the Australian National Kennel Council (ANKC) website at www.ankc.org.au
In New Zealand, please contact the New Zealand Kennel Club via the website www.nzkc.org.nz/about.html