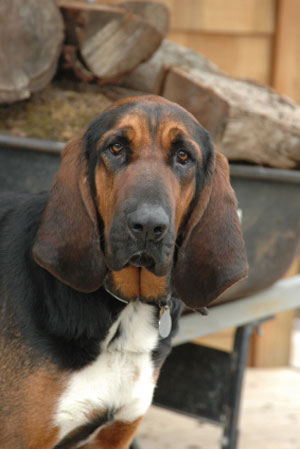 The Bloodhound, at more than a 1000 years old, is one of the oldest Hound breeds.

Today, all Bloodhounds are black and tan, liver and tan, or red. The Bloodhound thrives on trailing rather than killing, and has been used to trail animals, criminals and lost people. In the US, their testimony is taken as evidence in a court of law, and they are used extensively by local law-enforcement agencies and the Federal Bureau of Investigations (FBI) for search and rescue, trailing criminals and identification in police line-ups.

The Bloodhound is known to be extremely affectionate, gentle and loyal. Just ask Sue Pederick, who has been involved in their breeding and showing since 1989.

Bloodhounds are one of the most loving, loyal dogs, who will make you laugh with their clumsy antics, Pederick said. Every one of my Hounds has had many funny moments, each incorporating its own idiosyncrasies, like Panda swimming out to us in the middle of the dam, then rolling over onto her back and falling asleep while we supported her.

Pederick said that, ideally, the perfect person to own a Bloodhound should be fairly active, with time and energy to give the Hound exercise, plenty of patience and firmness, and affection.

You should also not mind too much when the affectionate creature leans on you or puts its noble head on your knee, leaving behind a monstrous snail trail of slime, she told Dogs Life.

These trustworthy dogs get along wonderfully with other animals and children. The Bloodhound is a particularly social breed and can live in harmony with other dogs, people or animals. It is most important to establish rules early and to stick to them, Pederick said.

This breed makes a great watchdog, but can be a little lazy at times. It depends on whether it suits them. If they are awake and around, they always alert me to a visitor or something that’s not quite right. But if they are asleep, forget it; they couldnt hear anything over their snoring, Pederick said.

Some Hounds, though, can get quite protective of their home and owners vehicle, and would put a lot of possible burglars off by their size and very deep bark, she added.

This breed loves human companionship and thrives on attention. The Bloodhound does not adapt well to solitary life in a backyard and would prefer to be inside with the family. It requires an average-size yard that is fully fenced, as well as a daily walk. Breeders recommend restricting exercise to short walks for the first nine to 12 months of a Bloodhounds life, to let its large bones form.

Because of the Bloodhounds headstrong nature and love of using its nose, it is most important to keep it in a fully enclosed area at all times, as well as on a leash while out walking, Pederick said. Once Bloodhounds get on the scent of a trail, you can yell until you’re blue in the face and they will not take any notice of you. To have a loose Bloodhound is to end up with a dead Bloodhound.

The Bloodhound is very intelligent and always eager to please, but can be stubborn at times. Some would say training is a challenge, but with consistency and perseverance, it can be done, Pederick said.

It really depends on the amount of time and effort the owner puts in. With positive reinforcement and a special food reward, basic instructions, such as sitting for meals or walking nicely on a lead, will be learned quite quickly, Pederick said.

Bloodhounds can seem willful, stubborn and very disobedient until the owner realises that this breed has retained the true Hound characteristics of hunters and makes its own decisions, she explained. At the same time, they are incredibly sensitive dogs. They need firm, fair and consistent handling, but also gentle handling. They really are a unique breed.

Bloodhounds are known as a wash n wear type of dog, with their smooth, short-haired coat only requiring a wash every now and then. A weekly rubdown with a glove will help shed any dead hair. However, eyes and ears should be checked on a daily basis and cleaned if necessary, Pederick said.

The Bloodhound is generally a robust and healthy breed, but can suffer from bloat, hip and elbow dysplasia, cancer, entropion and ectropion although responsible breeders test for all these conditions and breed only from stock they believe will return good results. Most breeders take time to study the bloodlines with the intent of eventually breeding these problems out of their lines.

If you have the time and dedication to take one of these admirable dogs into your home, you will be blessed with an extremely loving and intelligent companion for life.